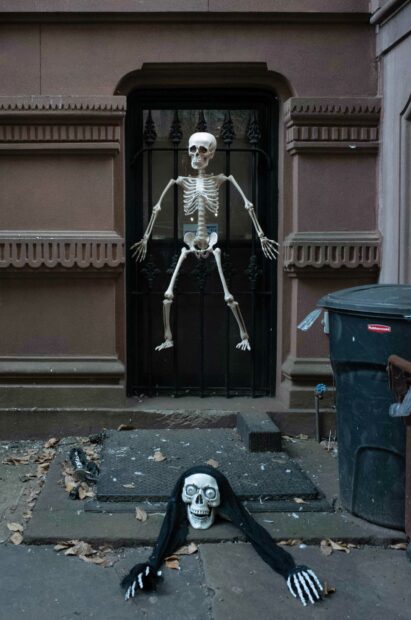 It is again time for bones. For the past year, I have been walking around confident that I said all there is to say about decorative skeletons. “They love to smile because they have no skin,” I proclaimed in a photo essay last Halloween as I dusted my hands and walked off into the sunset. The issue, I assumed, was laid to rest, and I was free to set my sights on other topics. But no.

It was brought to my attention recently that acclaimed author and Twitter antagonist Joyce Carol Oates had tweeted about how decorative skeletons were bad, and a lot of people made fun of her for doing so. The monster punches its way out of the ground at the end of most horror movies. Of course, it is Twitter that is bad. And skeletons, I am now compelled to reiterate, are good. Yet I have no desire to retread my steps, so now I will focus on one especially compelling subset of the decorative skeleton market: those with hair. 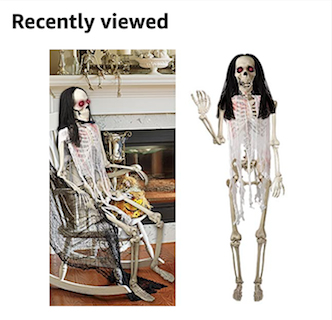 I recently relocated from Houston to Brooklyn. One major drawback of this transition is my heretofore inexperience with the absence of front lawns, which causes a comparative scarcity of Halloween decorations. It was clear to me that there was a problem as early as late August, when I noticed the meager Halloween section at my local Home Depot. There, twelve-foot skeletons are only a rumor. Even the Spirit Halloween that popped up on Atlantic Avenue is little more than a costume shop — there are no elaborate latex motion-activated doll demon murder dioramas to be found. And why would there be? Who has the room?

Yet people make do; Halloween is alive in the big city. Inflatable black cats are popular. I would simply have to put in some miles on foot if I wanted to find any skeletons with hair. 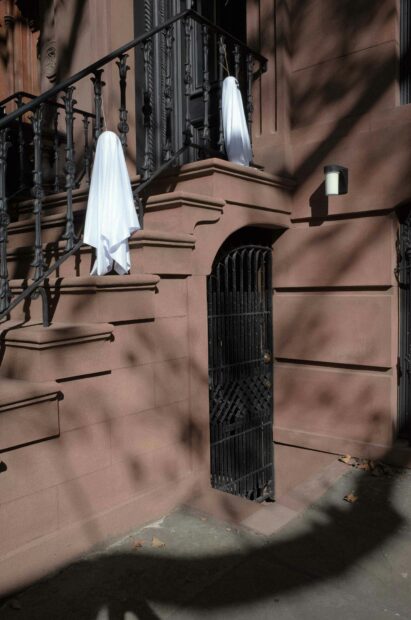 While out making pictures, I texted a friend back in Austin to ask if she had any thoughts on skeletons with hair. “How much hair,” came her reply. It was a great question. The skeleton who has hair often has a lot of it; it’s long, unkempt, a little witchy. Likely, this is because the factories that produce Halloween skeletons also produce Halloween witches, and only want to source one type of synthetic hair.

But even when represented in media, the hair tends to be at least shoulder-length. The Crypt Keeper, who may or may not be a skeleton but is definitely an influence on skeletons, comes to mind. I believe there is an urban legend that hair continues to grow after death, which, even if true, would surely cease by the time one was a skeleton. A quick Google search for “skeletons with hair” reveals a munched-up corpse from Pompeii who has a gray sort of fade. It is less than thrilling. Image searching “Andrew W.K. as a skeleton” produces much more satisfactory results. Much of the excitement around skeletons comes from the artifice, from playing dead as alive, as a cartoon. The long hair is extreme, but it helps.

I can recall a skeleton Elvis I once saw. The scary pompadour works. 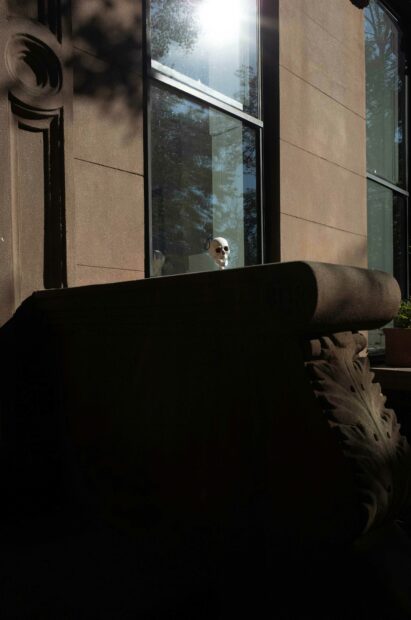 Sometimes, the word “scary” communicates a funny version of fear. Terrifying, horrifying, fearsome, creepy, chilling — these words all connote the concept of scary better than “scary” does. Spooky always sounds cute. Scary can be twisted in that direction, albeit with a bit of a harder edge. Skeletons with hair are scary in this sense. They are severe and severely ridiculous. To give a hairdo to a skeleton is to make it less human through the addition of human attributes. It plants the skeleton firmly in the lexicon of Frankensteins, werewolves, and goblins — fun fear. The only stronger move in this direction, when it comes to skeletons, is to make one play the piano. But pianos cost more than wigs.

Even as I played pretend as street photographer of the Brooklyn Halloween scene, luck was not on my side. None of the skeletons I found had hair. I took photos I had already seen. This misfortune should have come as no surprise — when it comes to photographing in 2021, the surfaces of New York City are withholding and full of redundancies. One would have to dig deep to make pictures that do not merely imitate those crafted fifty years ago by men with Leicas.

While researching this piece, I came across a cheap meme that shows a skeleton sitting on a bench. He is waiting for his hair to grow. It is stupid, and I hate it. But it is also me, waiting to discover a good new “street photograph” from New York. But hey, I’m new here. So as any enterprising lens-based artist who recently moved to the city might do, I turned to video to get my point across.

Text, video, and all images by Bucky Miller.