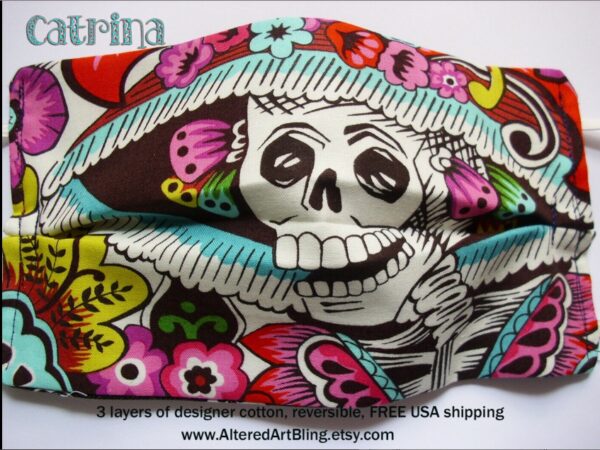 The Spanish word catrina means female dandy. The big-hatted, skeletal figure popularly referred to as “Catrina” is a now-ubiquitous character associated with Day of the Dead and with Mexico in particular. This article is the second in an annual exploration of Catrina-related phenomena in art and popular culture written for Glasstire. Find the first one, from 2019, here.

The Catrina image, which is the creation of the enormously influential Mexican printmaker José Guadalupe Posada (1852-1913), originally had satiric intent. It was first published in black ink on a Day of the Dead broadside issued by the Vanegas Arroyo family in 1913. The image was reissued in various formats many times thereafter, and the family still sells it today. Its popularity has grown exponentially, and this image graces every conceivable form of merchandise. As soon as facemasks proved effective against the spread of the coronavirus, I expected that Catrina facemasks would quickly find their way to market. Colorized versions — such as the florid one illustrated above — are very popular, whereas stark black-and-white Catrina facemasks are not. 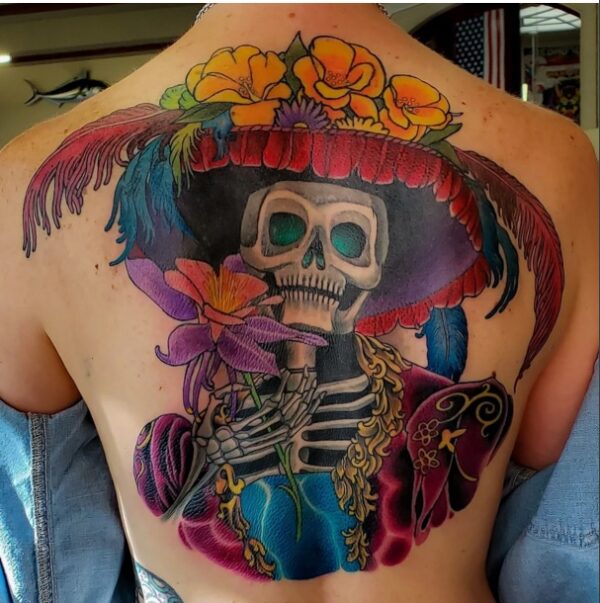 I have also noticed a surge in the popularity of Catrina-inspired tattoos. If one were to get a tat like the one pictured above, the recipient could say: “La Catrina has my back.” Its scale reminds me of the enormous Virgin of Guadalupe tattoos that some Latino prisoners get as apotropaic devices: they reduce the chances of getting stabbed in the back, since some prisoners would be reluctant to stab through an image of the Virgin. Could La Catrina have a similar effect? It’s one thing to stare death in the face, but would someone dare to stab death on the face of someone’s back? In any case, after donning a Catrina facemask, the recipient of a tattoo like this could say: “Catrina has my front and my back.” 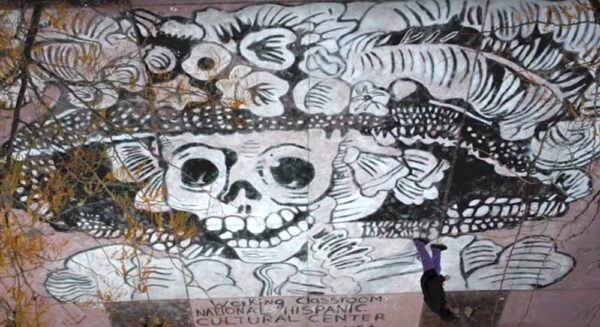 Faithful reproductions of Posada’s black-and-white print come in all sizes. This monumental version (the person in the lower right provides a sense of scale) was made in Albuquerque. 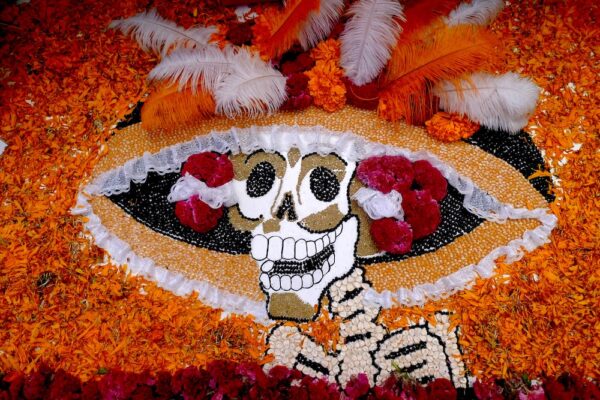 This Catrina, made as part of a Day of the Dead altar in the center of Mexico City, is composed of seeds, flowers, feathers, and lace trim. 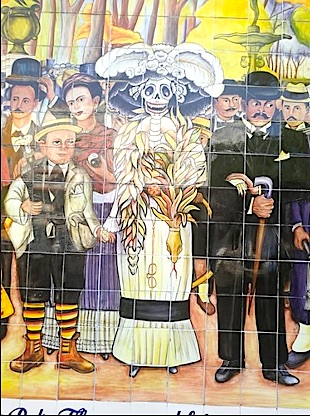 Tile version of the lower center of Diego Rivera’s mural, A Dream of a Sunday Afternoon in the Alameda Park, Tlaquepaque, Jalisco. Catrina is between Posada and Rivera (depicted as a boy). Frida Kahlo is depicted as an adult. Photo credit: flickr user gerrygoal2008.

The big, feathered, European-styled hat that Posada provided to Catrina is a sign of colonization and cause for criticism in Mexico. But muralist Diego Rivera (1886-1957) changed that narrative in a mural he painted in 1946-47 in Mexico City. In the lower center of his A Dream of a Sunday Afternoon in the Alameda Park (Museo Mural Diego Rivera), he painted a full-length image of Catrina that fully rehabilitated her. By endowing her with Mexican attributes, which include a rattlesnake boa, an ollin glyph for a belt buckle, a simple skirt like those worn by women from Tehuantapec, and fangs and a bloodied mouth, Rivera essentially nationalized Catrina (these national emblems are visible in the tile reproduction pictured above). Rivera reduced the prominence of Catrina’s hat by enlarging her feathers, which can also be interpreted as an affirmation of the indigenous peoples of Mesoamerica, who valued feathers more highly than gold. Rivera endowed his Catrina with so many Mexican emblems that she ceased to be a symbol of foreign domination and imitation. For a detailed analysis of the origins of the Catrrina image, including Posada’s print, Rivera’s complex transformation of it, and later manifestations of Catrina, see my first Glasstire Catrina article, José Guadalupe Posada and Diego Rivera Fashion Catrina: From Sellout To National Icon (and Back Again?). 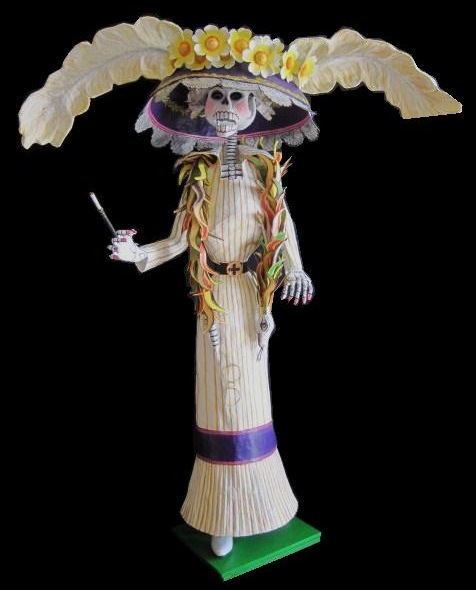 The Linares family workshop has frequently made Catrinas that closely follow Rivera’s prototype. Although most modern-day Catrinas do not possess the nationalist emblems that Rivera provided to her in his mural, those made by the Linares family usually contain some of them. The example pictured above features a rattlesnake-feathered boa (a reference to the god Quetzalcoatl), and a Tehuana skirt (like the kind worn by Frida Kahlo). The two ostrich feathers seem to have taken on a life of their own.

The ollin glyph (the sign for movement, like the one at the center of the Aztec stone of the sun) appears on the belt buckle of many Linares workshop Catrinas. In this example, it has seemingly been transformed into a cross.

My first Glasstire Catrina article features four details of Rivera’s Alameda Park mural (one of which features a close-up the ollin glyph), as well as a papier-mâché tableau recreation of the central portion of the mural by the Linares workshop (as displayed at the Olmedo Museum in Mexico City in 2014). 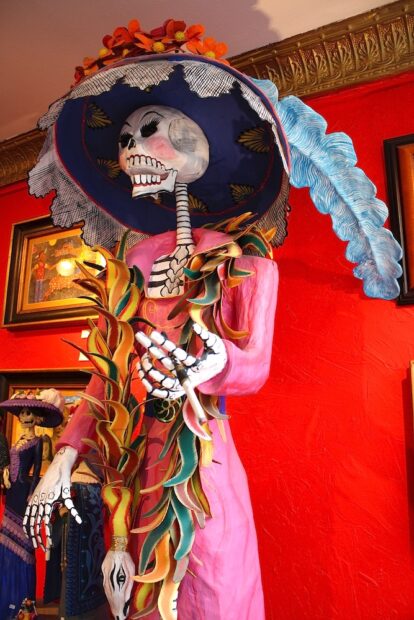 This Felipe Linares Catrina features a colorful rattlesnake boa. Note how small the skull is in relation to the hat. As I noted in the first Catrina article, hats like the one Posada portrayed were so massive that they needed a good deal of padding and wigs or big hair to anchor them to the wearer’s head. 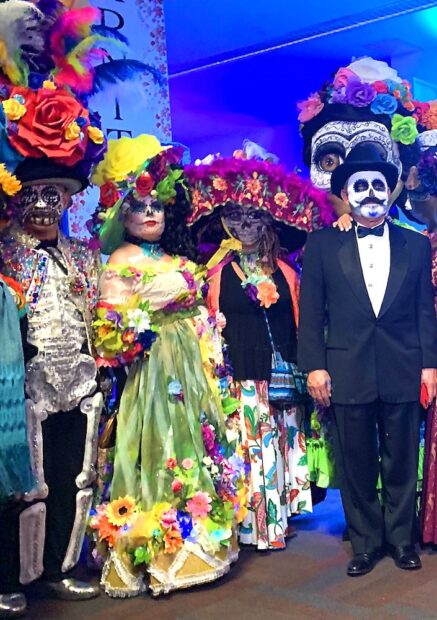 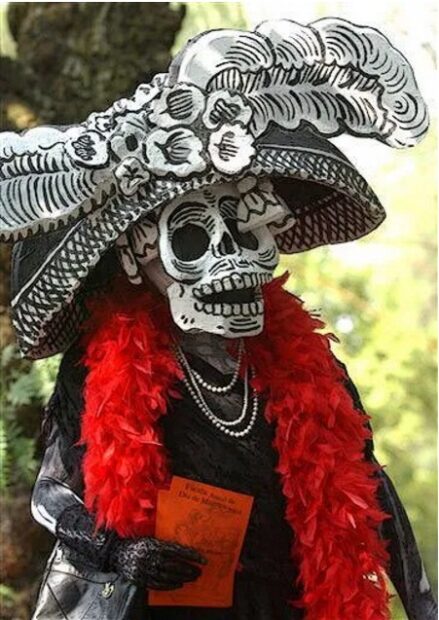 One couldn’t be more faithful to Posada’s original print than this impersonator. She sports a feathered boa for good measure. 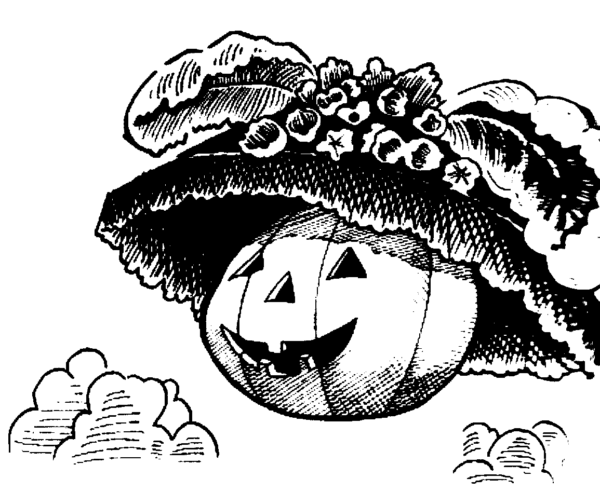 In Mexico, Day of the Dead and Halloween — especially among some politicians, journalists, and intellectuals — are viewed as warring cultural traditions and competing symbols of culture and nationhood. The former is characterized as native and spiritual, while the latter is deemed foreign, secular, and commercial. Helguera brilliantly synthesized the two overlapping and competing traditions with great economy, by simply capping a stereotypic Jack-o’-lantern with Catrina’s archaic hat. His product is a grinning combination of the two traditions. Claudio Lomnitz, in Mexico and the Idea of Death (2005), says Helguera’s cartoon “alludes simultaneously to the easy syncretism of Halloween and the Days of the Dead and to the higher classes’ tendency to adopt Halloween as their own form of vanity.” 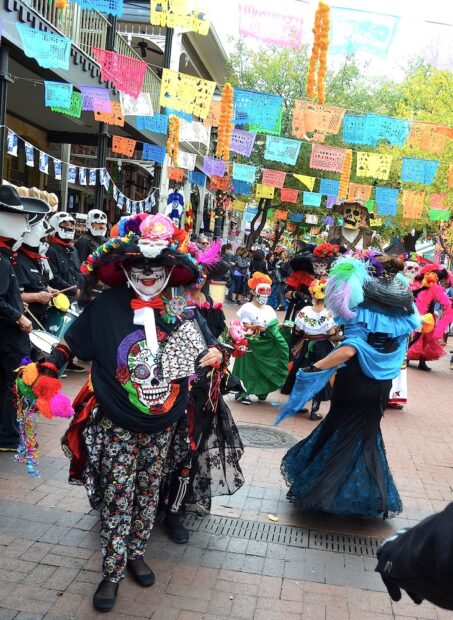 Posada fashioned his Catrina by capping a skull with a big, bourgeois hat. That hat is all that is really needed to crown a Catrina, as demonstrated most dramatically by Helguera, who substituted a carved pumpkin for a skull. The Catrina in the left foreground of the above picture is dressed for comfort. That hat is all she needs to endow her with Catrina-hood. 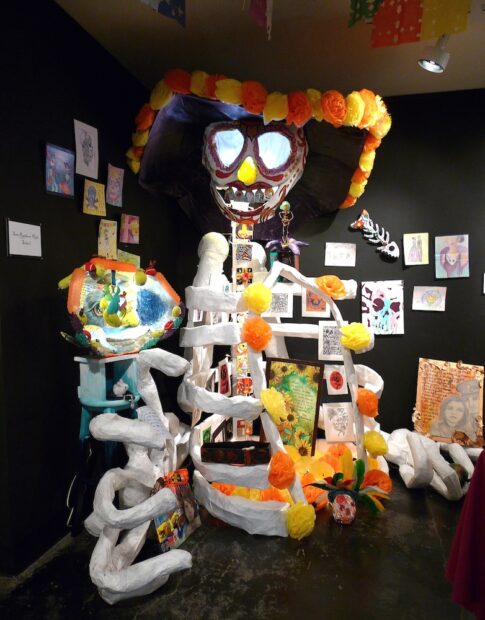 Similarly, the large half-skeleton (clearly influenced by Carmen Caballero’s papier-máché skeletons) in the charming installation pictured above is identifiable as a Catrina by her large hat, which blends almost invisibly into the black background. 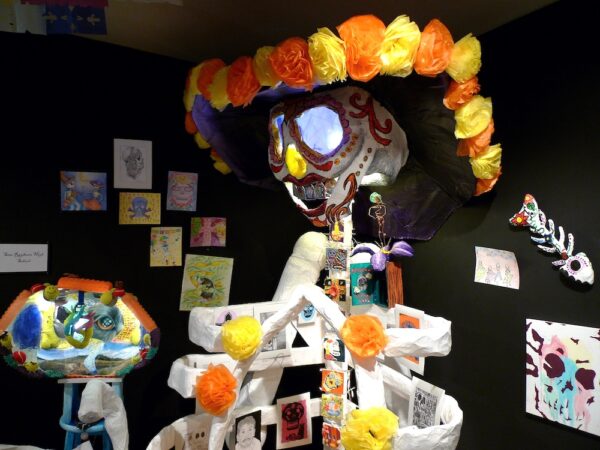 The hat is legible primarily because it has a row of paper flowers along its rim. 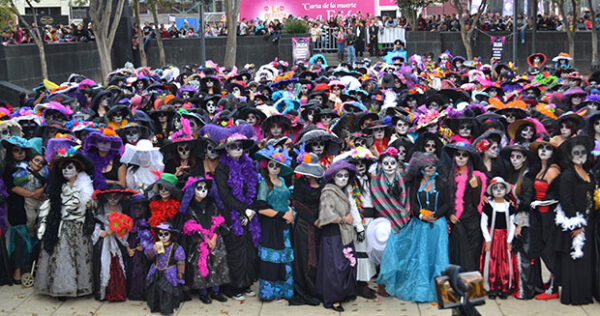 A short-lived Guinness world record for the most Catrinas in one place was set in 2014, when 509 costumed impersonators gathered at the Monument to the Revolution in Mexico City. This number does not include those who were disqualified, including all the men, and those women who did not have the requisite elements. If the videos I have screened are correct, the Guinness requirements this year were: a hat; white face paint with black eyes and noses; a dress; a boa. For a short Spanish-language film, please click here. 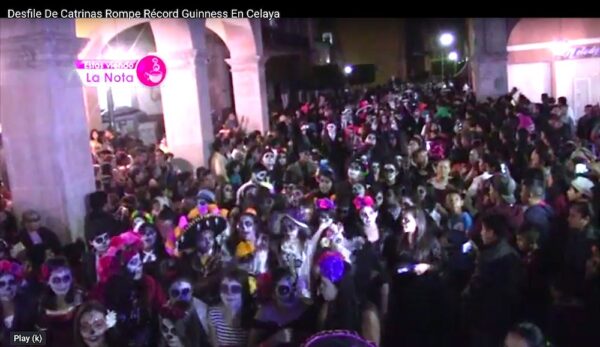 By 2016, the Guinness rules were relaxed, and men who dressed as men were allowed to participate (I don’t know to what extent the rules for women were relaxed as well). On Oct. 30, 2016, a new record was set. According to Guinness, the largest gathering of Catrinas and Catrines took place in Celaya, Guanajuato, Mexico, when the Instituto de la Juventud Guanajuatense brought together 865 qualifying participants. Many later joined the procession pictured above. 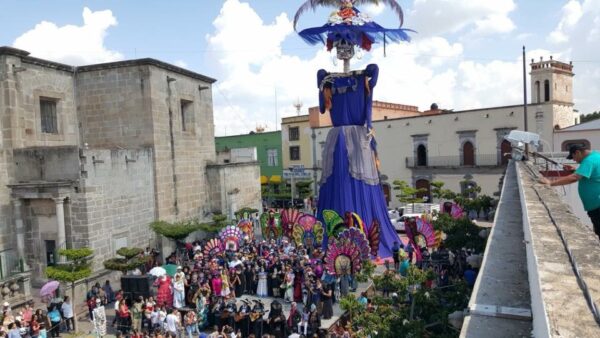 As reported by Mexico News Daily on Nov. 3, 2016, the “passion for beating Guinness records” has become “another Mexican tradition.” In my first Glasstire Catrina article, I illustrated “Sofia,” an 8.1 meters high papier-mâché Catrina made in the Federal District.

In 2015, Zapotlanejo’s record-breaking Catrina, fashioned out of three tons of construction materials and 350 meters of fabric, attracted 50,000 visitors during the three days it was exhibited. For a film clip of the 2015 installation, which featured the Catrina in a flower-bedecked black dress with a feathered rattlesnake boa, go here. The Zapotlanejo Catrina was displayed in a dark blue dress for nine days in 2016 (as in the photo above), and the Zapotlanejo Catrina festival (and sometimes the Catrina herself) has continued to grow.

Mayor Héctor Álvarez Contreras proudly noted the construction of a massive, seven-level pyramidal altar, constructed of 5,000 bricks and decorated with 2,000 candles, 150 loaves of bread, 50,000 marigolds, and a ton of sugar cane. 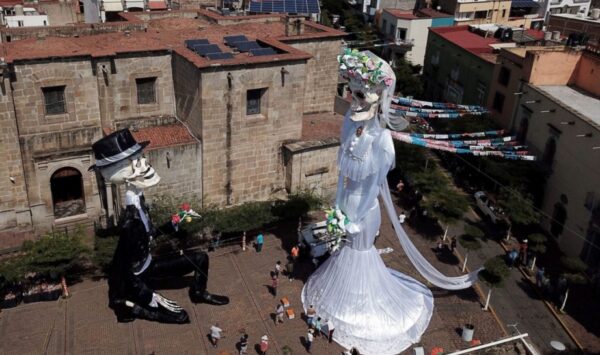 Catrin (male dandy) on one knee before Catrina, who is dressed as a bride, 2019, Zapotlanejo, Jalisco. Photo credit: Ulizes Ruiz /AFP / Getty.

Though she was missing her signature Catrina hat in 2019, Zapotlanejo’s Catrina can be forgiven, since it is her wedding day. She is dressed and posed as if she were taking wedding shots with her groom. For a Spanish-language clip of the 2019 installation, please go here.

Zapotlanejo has continuously renewed its record Catrina statue by creating an entire wardrobe of clothes for her, is if she were a giant Barbie doll. In 2019, the Catrin on bended knee served as her Ken. What will be the next monumental accessory — an oven in which to bake Day of the Dead bread? In 2017, the giant Catrina was endowed with an enormous Tree of Life headdress, which greatly augmented her height. According to Zona Guadalajara, the 2017 version topped out at 30 meters. For a noctural film clip of the 2017 installation, including the pyramid’s dramatic lighting effects, please go here.

Traficozmg.com reported in 2018 that it was the tenth anniversary of Zapotlanejo, stating “No to Halloween.” This initiative, which coincided with the launch of the Monumental Catrina project, was motivated by the tendency of children to observe Halloween rather than Day of the Dead. If your goal is to overwhelm Halloween, this is the way to do it! 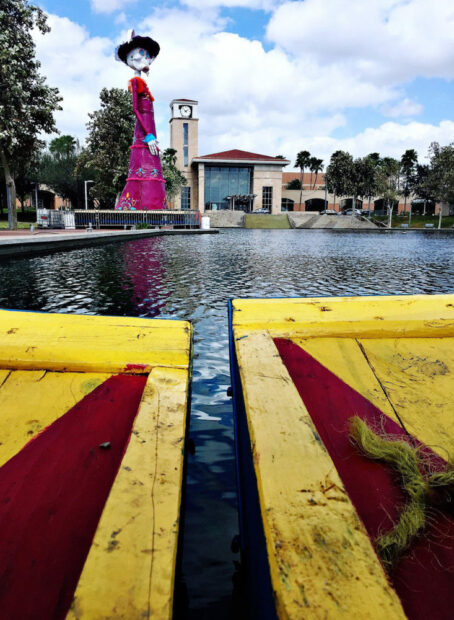 The U.S.’s largest Catrina is about two-thirds the size of the one constructed in the village of Zapotlanejo. McAllen’s monumental Catrina was initially installed next to the Oval Park pond. In Delicia Lopez’s photograph, it is viewed from midway between two brightly painted, flat-bottomed boats, similar to the ones that ply their trade in Lake Xochimilco. The statue was then transported to the Tecate Catrina Music Fest festival grounds, where it presided over concerts during the latter part of McAllen’s Day of the Dead festivities. Go here for a video produced by the Monitor. 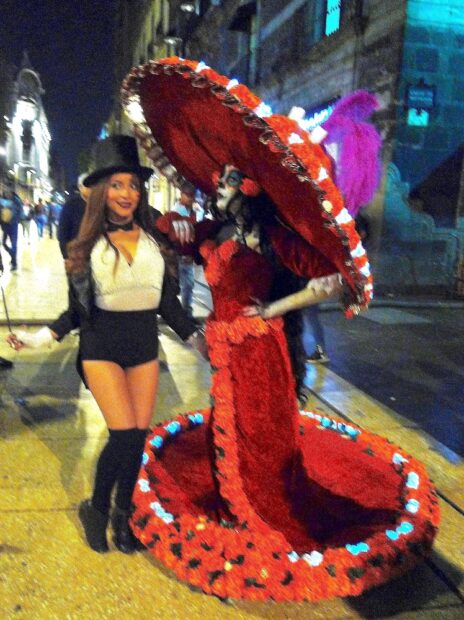 It’s late at night on the Avenida Madero, a pedestrian corridor between Alameda Park and the Zocalo, where revelers show off their costumes, especially between Oct. 31 and Nov. 2. Most celebrants have long since departed. A Magicienne waves her wand, to make some final photographic magic with a Catrina, whose variant costume was inspired by the 2014 film, The Book of Life. 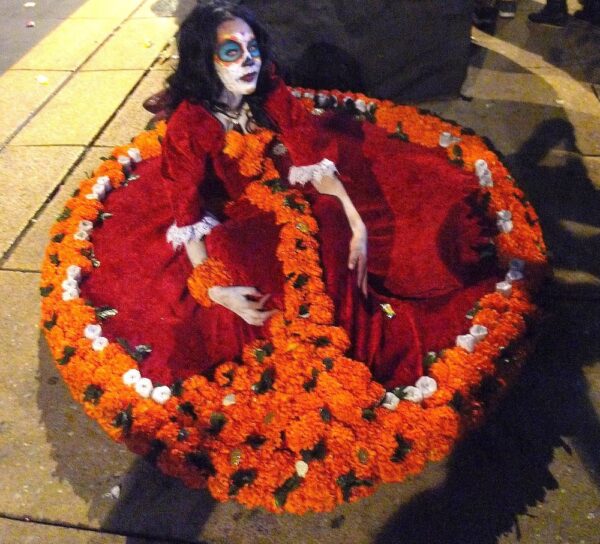 Earlier in the evening, this Catrina was resting on the rolling dolly to which her dress was affixed. 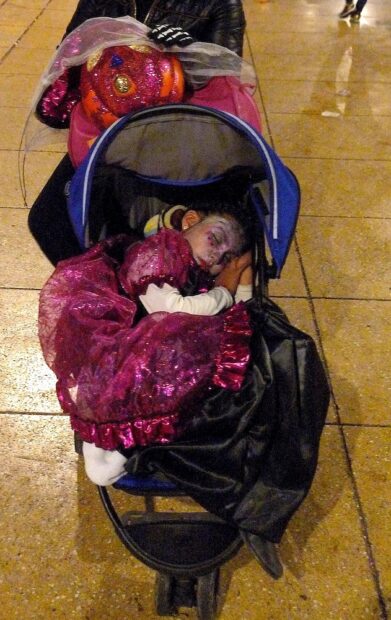 It’s four a.m., and Mexico City’s smallest Catrina is curled up, asleep in her stroller. Her mother’s skeletal hand presses the little Catrina’s hat against her plastic Jack-o’-lantern, which was used to collect treats. Quite fortuitously, she has recreated Helguera’s cartoon image in real life. After pausing for this photo, she continues to roll the little Catrina toward home.

My 2019 Glasstire article Guide to Day of the Dead in Mexico City features a cut-paper Catrina on an altar at the Museum of Popular Cultures and a painted Catrina in the background of a “singing altar” on the Zocalo.

Ruben C. Cordova is an art historian and curator.