Moments in Horror Movies That Could be Played in a Museum 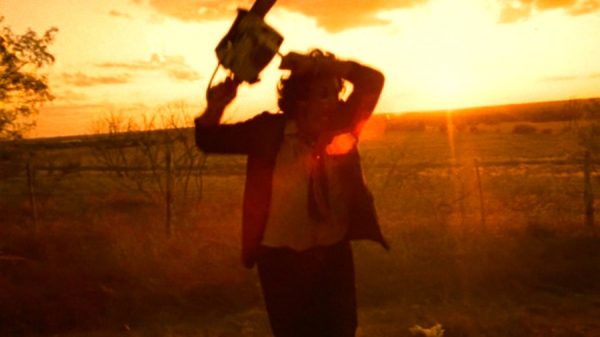 Horror is easily my favorite film genre. Despite its ignominious reputation due to its lurid and often gratuitous violence and depravity (and the fact that most horror movies are extremely stupid), horror often presents the purest distillation of narrative film. There’s the tension made up of dread and release, pain and catharsis, sex and death — the greatest horror films have moments of pure synthesis, scenes that are simultaneously terrifying, exalting and pleasurable. These are scenes that could play on a loop in a darkened room in a museum. Here are some of my favorites.

The insanely gifted German silent expressionist director F.W. Murnau was a preternatural master of absolute, soul-hollowing terror, even in the age of silent film. With rickety, flickering, slow moving cameras and obviously artificial sets and no sound, Nosferatu‘s plot follows a simple woodsman who is startled by rats squealing out of a coffin. Then the vampire Nosferatu, played by the terrifying Max Schreck, rises straight as a board from the coffin like a human naked mole rat, seemingly in awe of his own vampiric immortality.

The fear on the face of the woodsman is one of the great moments of the silent film era. In 1926’s Faust, an outstanding adaptation of the epic Goethe poem also directed by Murnau, the film begins in a German hamlet. Japery abounds. Various jesters and merriment breaks up the otherwise stultifying existence of medieval life. The next shot is an exquisite miniature of a medieval village, and the devil appears above it, like a monumental peak next to a ski resort. Murnau articulated, on an elemental level, a looming darkness and the enormity of evil.

The actor Charles Laughton directed only one film: the supremely haunting and beautiful Night of the Hunter, now considered an absolute classic in the genre of southern gothic. In the film, Robert Mitchum plays an oily, terrifying preacher who remarries a reasonably horny single mom and refuses to sleep with her; instead he’s hell-bent on finding some buried gold, and he literally hunts her children for information about the location. The kids try to escape Mitchum on a riverboat. This whole scene is a masterpiece of crystalline menace and watery beauty. The moment at the beginning of the scene, when you hear him bark “Children!” and a dark figure comes over the hill, is a perfect poison pill of patriarchal violence.

One of the best things about the horror genre is its egalitarianism. Many of the greatest works in the genre have been made on the cheap, by “amateurs” without lofty aims at “art,” and the results are transcendent. In the low-budget Carnival of Souls, a woman arrives in Salt Lake City after a devastating car accident, and is drawn by evil forces to an abandoned carnival. In this scene, she begins playing a church organ and is inexorably moved to play a twisted, séance-instigating tune that summons some pale ghouls from a nearby lake — a prescient metaphor for the next 50+ years of American life.

This is the greatest, most frightening low-budget horror film of all time — it’s simultaneously a very black backwoods comedy, a scabrous critique of the meat industry, and the purest distillation of a nightmare ever filmed. In the last act — after a gang of hippie kids has been brutally murdered by a deranged family of slaughterhouse workers — the last survivor (the “final girl,” naturally) screams her way through increasing terror at the family’s house before improbably escaping in the back of a pickup. The movie ends with the strangely joyful and cathartic sight of the film’s main bad guy, Leatherface, swinging his chainsaw (to the soundtrack of a Strauss waltz, no less), backlit by the sunrise, in a dance of pure malevolence.

This is kind of a perfect counterpoint to the above-mentioned Texas Chainsaw Massacre. Where TCM is a visceral fever dream of being trapped in a strange house with a terrifying family while a big brute wearing a skin mask bludgeons you to death with a meat cleaver, The Shining, directed by Stanley Kubrick and based on Stephen King’s novel, plumbs the horror of addiction and madness with meticulously framed moments of surrealism. This scene, in the last act, when things have become really unleashed (and that’s saying something given the everything that’s come before it), has a primordial force, articulating the worst thing imaginable flowing out from behind a closed door.

This list would not be complete without a David Lynch moment, and there are many to choose from: The wet and shiny baby in Eraserhead, the ear in Blue Velvet, the wicked witch in Wild at Heart, BOB in Twin Peaks, Robert Blake’s floating visage in Lost Highway. But the most frightening scene in Lynch’s entire oeuvre is the diner scene from Mulholland Drive. Two men sit in a corny LA diner, and one describes a recurring nightmare of being confronted by a horrific being behind the building. The other man suggests confronting this fear and looking behind this building, now. Slowly, in daylight, they walk to the dumpster area behind the diner, and the dream turns real: a horrific, burnt thing comes raging out from behind the dumpster (part of the Lynch canon of “the woodsmen”), causing the dreamer to literally die of fright.

I’m not sure a jump scare in a movie has ever been more beautifully executed or symbolically rich. Every time I have a such a luxuriously deep nightmare, there’s the sense, the moment upon waking, that it was real, and the world has shifted. The curse is real, and I have awoken under a black cloud.

I think the greatest film of this decade is director Jonathan Glazer’s elliptical science-fiction marvel. It effortlessly threads sexual and psychological symbolism with a deeply sad and moving meditation on the self, and mercy. Scarlett Johannson plays an alien wearing the “suit” of a beautiful woman, who drives around backwater Scotland seducing rubes and luring them to a house with a translucent black floor of interminable consistency. To Mica Levi’s creepy metronome score, Johannson undresses and lures the men across this black pool. The men also undress, often at full mast, and slowly sink into the pool before disappearing completely. These scenes are oblique and mysterious at first. Is it a pure metaphor of seduction and lust?

In an astonishing reveal, the answer is a resolute No. One of the men finds himself trapped in the goo, confused and moving in slow motion. He sees another man who seems bloated and pickled. They touch hands in a moment of tender compassion before the bloated man seemingly pops — his skin reduced to a floating bag of anguish. The scene cuts and we see a river of viscera —his insides — sliding down a shoot. This is how the aliens get their skin suits. The scene works on so many levels and is so elementally disturbing, while being hypnotically beautiful, that it operates as a perfect summation of the movie’s core.

This and That: Don’t Stick Your Arm in...