Art Meccas Vs. Texas: An Interview With David-Jeremiah 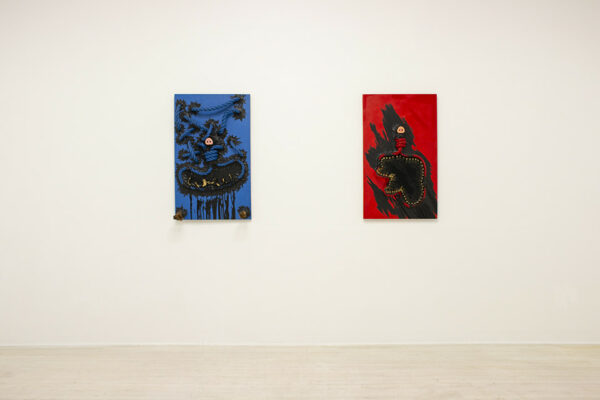 Note: This interview is a follow-up with the Dallas-based artist following his solo exhibition in Dallas and its attendant press in the summer/fall of 2020.

Eric Shaw: Since I wrote about you for Glasstire last September, your career’s skyrocketed, with two shows in New York — at the Anonymous and Halsey McKay galleries — and one in Washington D.C., at von ammon co. But some say you’re an overnight success piggybacking on our fiery conversations about race. What do you say to that?

David-Jeremiah: Alot of people think I’m just now blowing up, but I’ve been an active artist for 15 years. I wasn’t successful before because I wasn’t letting my purest energy hold me accountable.

I was fighting that energy, but then I realized I was a creator, and I also realized the true form of the art I needed to create. Now things are good. Now they’re where they need to be.

ES: You started out as an actor?

DJ: As a kid, I’d watch three movies a day, but I’ve stayed away from them for a long time. I just began to watch movies again — to share them with my girlfriend.

In 2012, I was nominated for D Magazine’s “Best Actor in Dallas.” If I’d kept at it, that career would be popping like my art career is now. But I realized that, as a nigga from the hood, I was always playing a role to avoid ending up as a nigga from the hood. When I took up acting, I just did more of the same. Now, acting makes my skin crawl.

When I wrap my flesh around somebody else’s words, I move in their world. My purest energy is my creative energy, I don’t want to waste it for them. The author and director get closer to god in that dynamic. 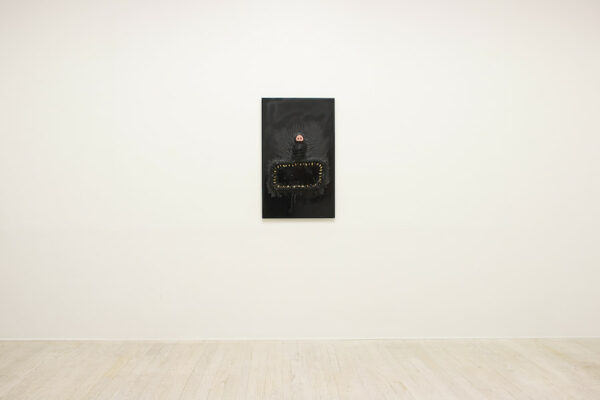 ES: Did you realize that in prison?

Prison is a place with dos and don’ts everywhere, but I’ve always had the capacity to think outside the box. Prison made what’s going on so undeniably real. None of my thoughts or distractions could get in the way.

And I realized my purest energy is creative.

Prison was a catalyst that switched me into full conceptual art mode. The largest object you could make there was the size of a poster board. My ideas were way bigger, and I had to suppress them for later.

I sat there for four years plotting and scheming, promising myself that I was going to take over — do some real evil- villain shit when I got out. But I didn’t really waste that time in jail. It gave me nine notebooks.

That’s why this shit looks so easy. That’s why I’m able to so precisely execute these concepts. I know exactly what to do. I’m following an old plan — and I’m going to fucking kill everything.

ES: What is your philosophy, your ethic as an artist?

DJ: One of the only things that I trust about myself is my work ethic. Anybody involved with me will testify to it. As much as I’ve been emasculated by being born a nigga from the hood, I won’t let anybody touch that. 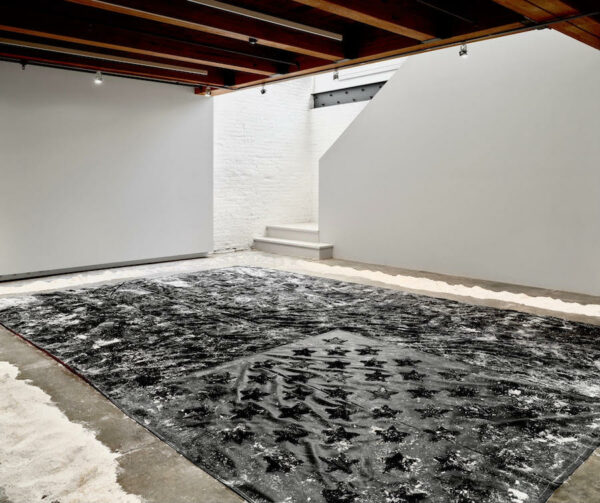 ES: Yeah, Rauschenberg said he had just one rule: “Finish everything you begin.” But I know you have a range of motivations. What else kicks your butt every morning?

DJ: I’m the kind of person who’s got to get his lick back. I got to hit you back. Revenge. Besides revenge, I wanna show that a nigga from the hood can contribute to society just as much — or more — than anyone who wants to stand up next to me. Art is competition, but I’m not in competition with other artists, I’m in competition with what my art is about.

There’s really no opponent in my mind — other than Texas.

ES: Texas is a strong culture. You’re rooted in this unique ecosystem.

DJ: You know, we kill presidents here. We kill cops here. We’re the most morbid tourist attraction in America. People fly in from all over to trace the steps of a motherfucker who got his wig pushed back in front of his wife. That’s some fucked-up energy. Dallas has some demons. Texas teaches you the importance of punishment.

It’s those laid-back good ol’ boy motherfuckers you got to worry about. They’ve been doing it so long, it’s become sport. The more polite it becomes, it’s like when a cat plays with his food before he eats it. It’s Texas, baby, we’ve been doing this for a long-ass time.

ES: That reminds me of an interchange I heard on a plane. A man said to a Dallas businesswoman he’d just met, “I don’t trust you Texas women. You smile in man’s face, then you stab him in the back.” She answered, “Well, there’s no need to be impolite about it.”

DJ: Yeah, there s no point in “being impolite about it.” We could skin a motherfucker alive, and not be rude about it. Dallas is focused on maintaining a very manicured presentation, but we really here thuggin’, bro. It’s really wild.

ES: Have your East Coast trips given you perspective on Texas?

DJ: Dallas loves to act like it’s “with it,” but LA and NY are the art world’s capitals. Once you get a shoe in there, you’ve made it. Art is supposed to push. That’s why it’s important to have my art here — not in New York or LA. I do it to validate Dallas.

DJ: We really are a bad-ass city. We really do have culture. Art like mine can thrive here. Art like this, people could come here to see.

But Dallas has done this time and time again. “Why can’t Dallas be like New York — why can’t we be an authority?”

I’ll tell you why. When I go to the DMA, where’s the Dallas shit? More to the point, where’s the Oak Cliff shit? That kind of risk-taking’s not here, because Dallas is Dallas.

And Texas is Texas. Texas likes to act like it’s with it, but we’re playing that same old game — playing like we’re not as fucked up as we really are — but we are. 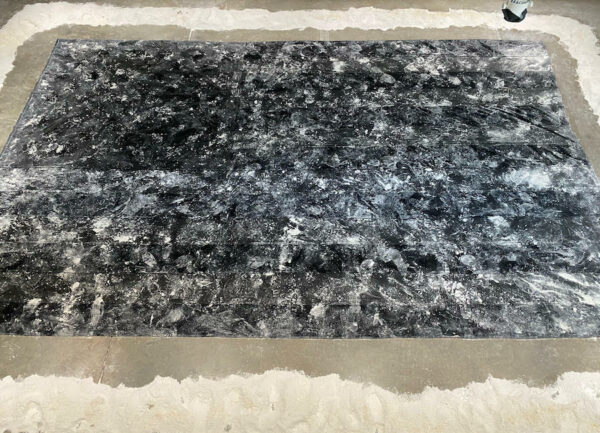 ES: That’s another one of your big motivations.

DJ: Pressure busts pipes. I’m keeping up the pressure. NY and DC are doing what they are supposed to do, so they rightfully talk shit about the Dallas art scene. They always roll their eyes.

People here are fans, but they let others take the risk. They do things in a very Dallas kind of way. It’s foundational for people to be brave in NY. I’m grateful, but they’re just doing what they’re supposed to do.

Texas should stop letting artists take all the risks.

I mean, people came in and tattooed a KKK mask on my body with a hand-made prison pick, and D Magazine sent a sportswriter named Doyle to cover it — literally the very night the show closed? How is that not Dallas? [He spreads his arms in gesture of “WTF?.”]

The nation’s capital loves this shit; why doesn’t Dallas like this shit? That’s what I got an issue with.

I’m out here making really brave art, taking risks. It’d be nice if I had a little help locally.

It’s like when [London’s Tate Modern] canceled the Philip Guston show [in September]. That’s your job to sit up there and contextualize this work. It’s your fucking job. 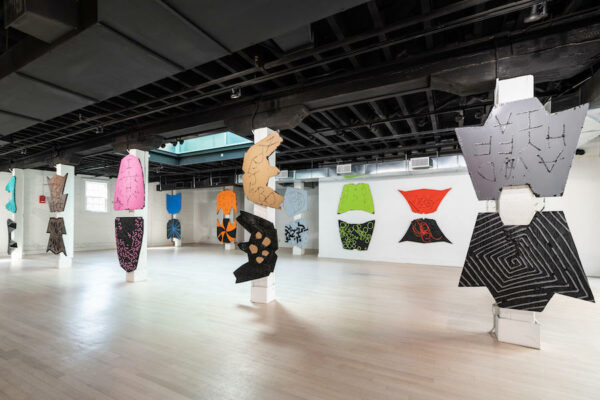 ES: You have a cultural agenda — that the culture from the hood has something to say to the wider world.

DJ: Yep. I’ve got something to prove.

ES: So, let’s get practical. We’ve nailed philosophy and motivation. I’m curious about the practical part. What do you actually do in your studio? What’s your process for working with materials?

DJ: I go into the studio and go hard. I’m no stranger to hard work. There was a lot of manual labor in my childhood. I was always in Home Depot growing up. I knew exactly what to use to make these pieces within the confines of my resources.

I used to hate Home Depot — just fixing shit around the house — but I’m thankful for that. Every material I use, I’ve already used in some other way, shape, or form. I want my studio activity to feel like work.

My favorite time to work is in the heat of the day — with no fans or AC in my studio in 96 degrees and 70% humidity — just in some shorts, sweating my ass off. I love the physical exertion of making my pieces. I worry about getting too far from the artist’s touch. What are your thoughts on that?

ES: When I put my hand on this table, something of my life force goes into it. When I sit with a painting for months, hitting that canvas again and again, it makes it a battery. It glows with life force — with intelligence. When I see a conceptual work executed by a machine or a casual activity, or put together by a third party, I appreciate the idea, but don’t care about the object. It doesn’t mean anything to me. There’s something missing. Some soul.

DJ: Art is my therapy — that business of making really good things. I’m going to get to the point where my touch isn’t as evident, based on the scale of my concepts. The art’s just going to get bigger.

There’s shit I don’t want to learn to do, but that won’t limit me. The ideas gave me confidence in prison. They made me an artist who’s going down in history. I have a gift for making objects, but I’ll never let this hippie idea of their beauty take over. Hell no. I won’t ever let my love affair with “touch” leverage myself against myself.

If it comes down to going forward on my art, I’ll let go of that artist’s touch. I’ve lived my life in a very physical way, and I love the physical, but I’ll let it go. 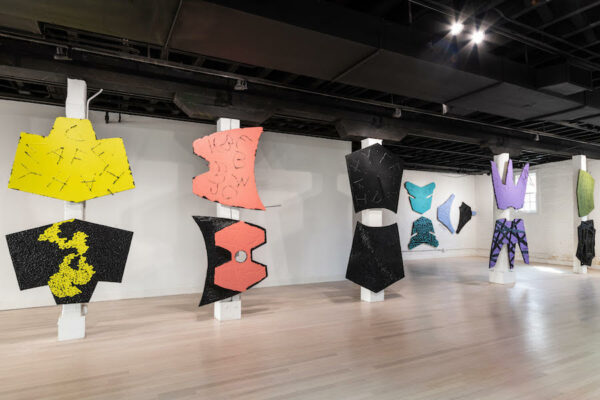 ES: What happens when you’re struggling with the physical? Can you explain to readers your thought processes as you make plywood, paint, or tar into art?

DJ: I can’t talk about that.

Art is my therapy, bro. There’s a clandestine part to this, and that dynamic’s private. I won’t let people know what’s going on in my head while I’m making my shit.