Offerings, David-Jeremiah’s installation at the Janette Kennedy Gallery in Dallas, consists of six bulky, black forms about chest high in a dimly-lit space, deep in the bowels of The Cedar’s South Side on Lamar building.

Air can be heard spinning into the space from some hidden duct. Massive cylindrical columns painted brown to waist-high punctuate the space between the pieces.

Each form is covered with Jeremiah’s signature black goo (a recipe he jealously guards), and it’s great stuff to touch. 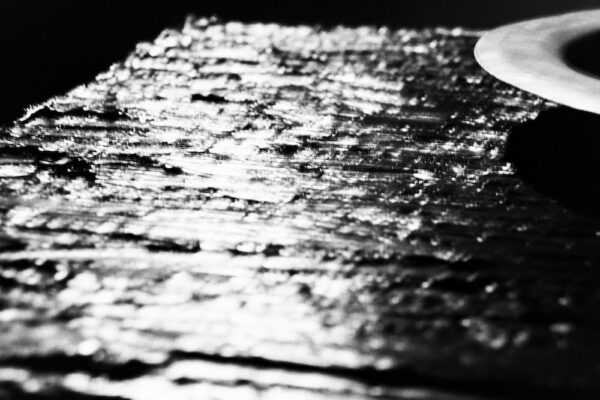 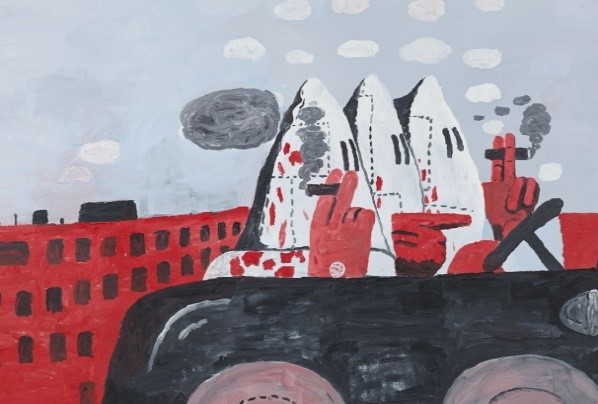 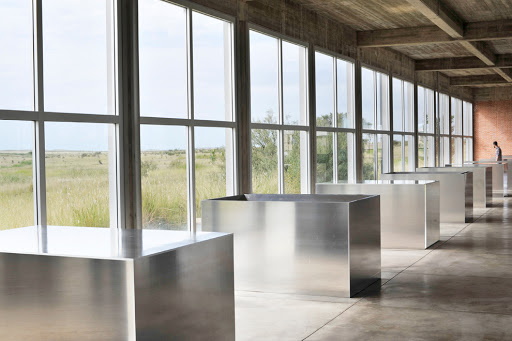 Like Judd, Jeremiah has left tiny variations in the seemingly undifferentiated forms.

Oranges, reds, and greens in “safety shades” can be found painted on the lower horizontal surfaces of some works, recalling artifacts of “construction culture” utilized by road crews with their cautions to “take care” or beware of danger.

Jeremiah makes no bones about his allegiance to the street, and these sculptures speak it on numerous levels. They evoke visions of burning tires, and maybe burning bodies, within proto-crucifix forms.

Their black-tar-ness calls to mind the torture called “tarring and feathering” practiced in Texas and other places during the Black Holocaust. The forms are heavy and set, and exude immobility — like the unchanging notions of race they stand witness to.

They are pharaoh-like and timeless, even as they’re topical. 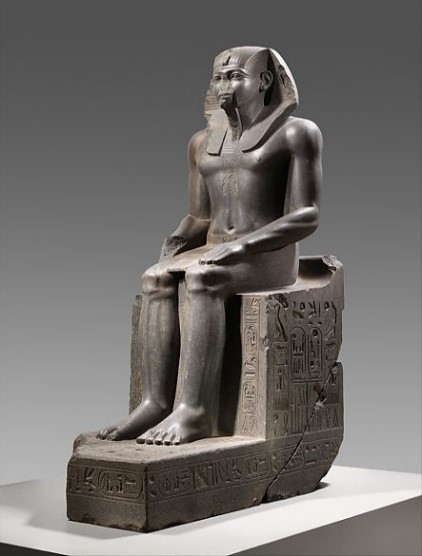 Five of these forms are named for the Dallas police officers killed by a rooftop sniper on July 7, 2016, and the sixth is named for Micah Johnson, their murderer. 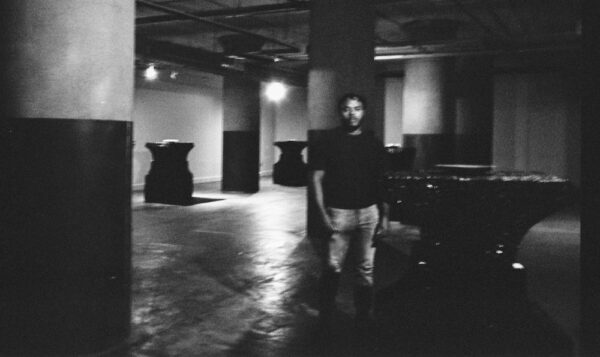 It’s heart-stopping work. If Jeremiah keeps going like this, the big guns of the art world will soon come calling.

It’s stunning to know that he’s been creating visual art for only four years. Before that, he was in jail. He apprenticed to no one. He’s got no art degrees. He mines his own experience as a Black man in America for his material, for his forms, and for his message. It’s a polarized view of the world — one he confesses is dramatic, but which he knows is needed, too.

A lot of aesthetic practitioners who focus on politics and activism label these efforts “Artivism.” Jeremiah’s work falls neatly into the category. We see lots of interesting work of this kind in the art world— artistic production that plays with paradox and that’s willing to undermine easy nostrums about what’s apropos for right-leaning or left-leaning audiences.

But much of that work suffers from a poverty of political and aesthetic vision. Or it’s driven by the artist’s guilty sense that the aesthetic mission on its own is frivolous — and the artist, or their work, must be shored up by some other system of meaning. Much of this work fears the soul of art — the play of opposites — and so it dies on the vine.

Incapable of seeing paradox in the political, Agit-Prop art ducks its mission to awaken the viewer’s soul; it cheerleads for existing biases (and, maybe, even imagines that its viewers have no souls). Often, it takes a stab at the faux-controversial, laying down contrivances everybody in an art gallery already agrees with anyway.

With so much schlop out there, Artivism has got to work overtime to surprise its public.  It’s gotta discover profoundly new ways to blend commentary and form — and it should dare to recruit the unsunny sides of ourselves into strangely open conversations, too. Artivism needs to be more than just a meaner and more colorful expectoration of the party line.

The best purveyors of the genre are always worth viewing. The worst have just jumped on the gravy train to piss on Trump, or racism, or some oaf who’s cut down a tree. They aren’t testing any viewer’s brain.

I look forward to the day I see a right-wing artist from Idaho get gallery representation.

That said, the Dallas-based Jeremiah’s Offerings, though thickly political, is gold. The artist’s wizardry with form mixes message and material in wholly novel, unforgettable ways. His work is unapologetically topical. It’s of the age, but it’s also for the ages. He weaves layers upon layers of narrative into the work, and it’s not — like some artists’ work— a seeming after-the-fact justification, or a way of piling up concepts to prop up something that’s wholly pedestrian.

When Jeremiah riffs on his work, the form blooms.

In one statement, he comments on Lamborghini’s habit of naming its car models after Miura bulls — a special Spanish bull bred for bullfighting — identifying the creature as a “beautiful, perfect body that’s rooted in ritualistic violence as [much as] the human body”

Such a comment snaps his whole oeuvre more fully into view.

We think of how Jeremiah lay flat in an art gallery for 21 days as viewers were invited to put on a Klan hood and tattoo his ribcage. We think of the ritualistic violence Offerings memorializes: black uniformed officers shooting African-Americans in the streets — and the ritual of them shooting back. We think of lynching — a blood ritual whose iconography snakes its way into so much of Jeremiah’s art.

Form and information are singular here — and the pitch, and tenor, and rhythm of the voice is new.

Each of these six, near-identical offertories are topped by a pure lead collection plate (“like bullet lead” the artist says). The gallery handout asks viewers to drop donations there — ones that will, at the end of the exhibition, be separately totaled “to determine who’s grief was worth more.” 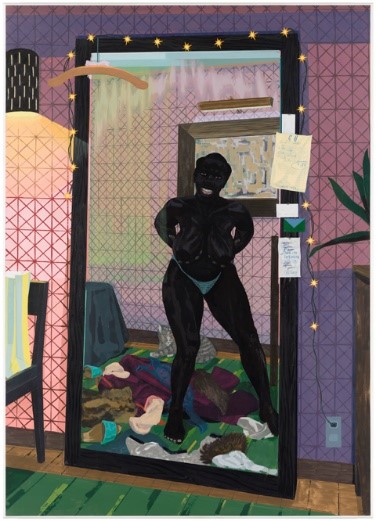 The raft of associations is near-limitless here: church offertory plates stand in for human heads atop forms that are like standing bodies, suggesting that we all think with a head that’s mindful of money. At the same time, these broad plinths look big-hipped and possibly large-breasted — as if mapping the generous form of a Black woman’s body. If we can jump across feminine iconography, they echo India’s gift-goddess Lakshmi in India’s attack-goddess Kali’s blackened form. 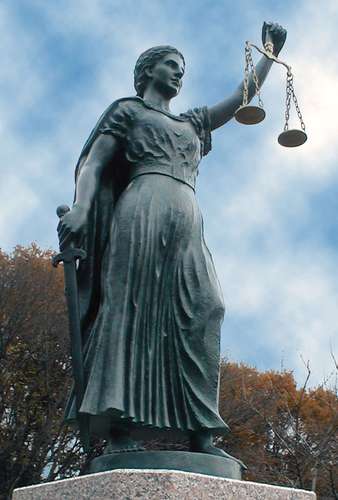 And the lead plates are like those held by Themis, Goddess of Justice.

And, knowing Jeremiah’s work, you can’t help guessing there’s cynicism behind this test of the public — seeing who will decide whether some White life or some Black life matters more, even as he sends a dark message about the scales of justice being tipped by contestants who have the most cash.

In other works, Jeremiah flirts with the incident that killed these six men (I think of his daring earlier performance-art piece that had him pasting “I [heart] Micah” bumper stickers on police cars), and I can’t help thinking of the connotations of six — since the Offerings figures are so darkly evocative in their number: “six feet under,” “the sixth sense” (that tells if we’re being stalked), and the six sides of a die, suggesting the street game of “shooting dice” and of chance itself, so often calculated in gradations of seconds and centimeters when death visits through violence. Jeremiah’s cultural side-winding is rife.

Where do these forms come from? 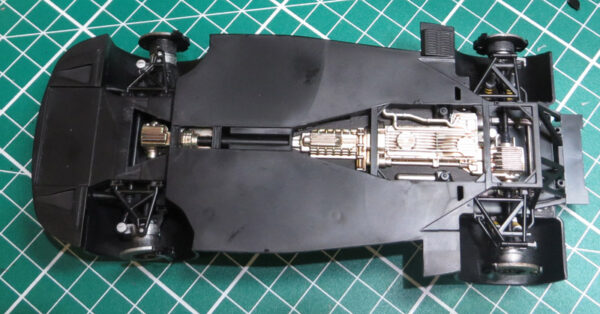 Jeremiah has said the inspiration for the plinth shape is a Lamborghini undercarriage. But zeroing in on this shape, he seems to have skipped free of any pan-European abstraction rooted in the Grecian line of art’s evolution, or even the Enlightenment’s ideas about art bringing light to our rationalizing brains. Jeremiah’s done the artistic Jiu-jitsu of skipping from African fetish and pharaonic art to street symbolism and Po-Mo. The architect Michael Graves haunts these forms, with their block-like construction, their call-out to the mute stasis of pyramids, and their arched mouseholes at center. 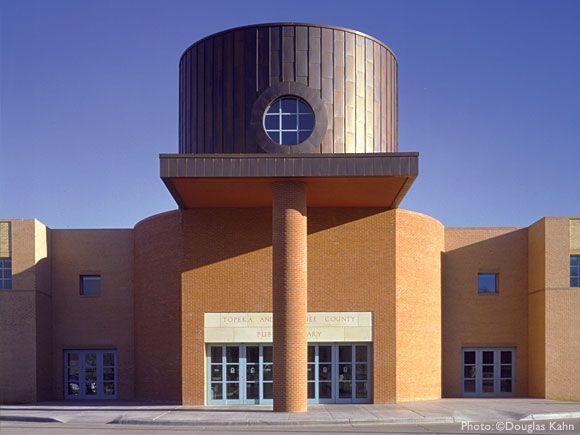 The way they stand sentinel, in a circle, also calls to mind a posse of cops on guard – or on the warpath. We can imagine a ring of prison guards, or the ring of policemen who beat Rodney King senseless in 1991—the first evidentiary of surveillance culture in the U.S. — perhaps the one video event that most accelerated our conversations about police brutality against Blacks. 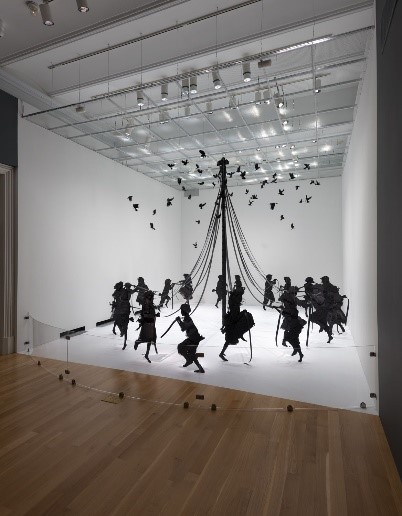 These silhouettey forms have numerous echoes in current art, but in theme and form, they mostly call to mind the silhouette forms of Kara Walker — the master of paper cut-outs, the political, and the paradoxical in Black-White relations. Though Jeremiah claims the primitivist idiom, the complexity of his visual language and his commentary is on par with that of Walker’s widely-applauded work. 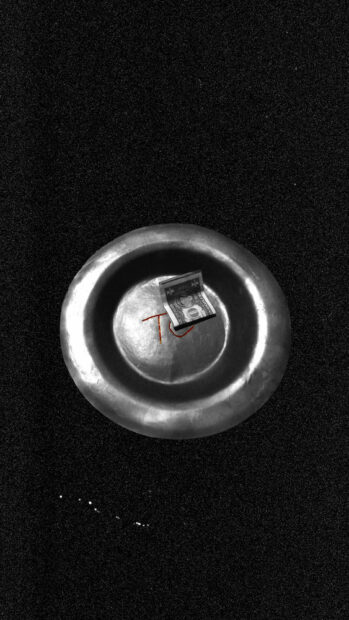 Etched in the gray metal plates on top of each votary are single words that together form the sentence “PAY US TO STAY US.” In interviews, Jeremiah seems to suggest that some essence of self is sustained by these payments — but the motif also echoes a theme of supplication throughout his work, as well as ongoing conversations about reparations for slavery.

Reflecting further on the meaning of sixes, I also take hints from Numerological Science — as it links the number to idealism, compassion, and self-sacrifice.

Amidst the Covid-19 epidemic, Jeremiah has stayed productive. What he’s accomplished in four short years is phenomenal. His willingness to speak a radical message, put his body on the line, and create unapologetically confrontational forms is baldly courageous. He exhibits heroic self-sacrifice for his art.

This bit of work was funded by the high-profile Nasher Sculpture Center, god bless ‘em.

Even bigger dogs will come praying at his altars soon.

David-Jeremiah’s ‘Offerings’ is on view at Janette Kennedy Gallery in Dallas through September 2020.

Art Meccas Vs. Texas: An Interview With David-Jeremiah