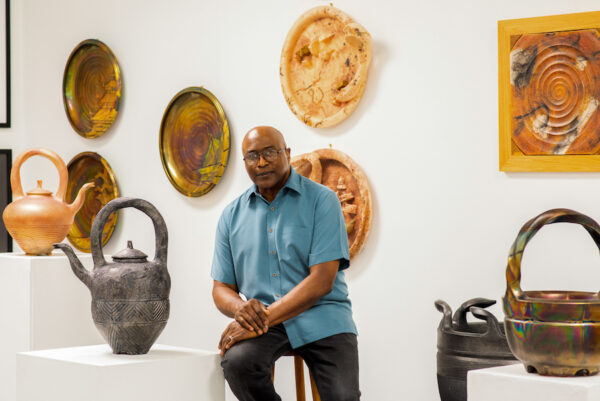 The following conversation is from a phone call between Hannah Dean and artist James C. Watkins in February. It has been edited for length and clarity.

James C. Watkins, recently designated by Houston Center for Contemporary Craft (HCCC) as a Texas Master, received his MFA from Indiana University and BFA from the Kansas City Art Institute. The former educator (a Texas Tech Professor Emeritus following his retirement), known mostly for his ceramics, has been featured in 40 solo exhibitions and 164 group exhibitions around the world. The White House Collection of American Crafts at the Clinton Library (Little Rock, AR), the Shigaraki Institute of Ceramic Studies (Shigaraki, Japan), the Everson Museum (Syracuse, NY), the Tweed Museum (Duluth, MI), and the Eiteljorg Museum (Indianapolis, IN) are among the more than 21 institutions that hold Watkins’ works in their permanent collections. The most recent permanent collections to acquire his work are the Museum of Fine Arts, Houston (as seen in its new Kinder Building), and the Renwick Craft Gallery of the Smithsonian Museum (Washington, DC). Watkins lives and works in Lubbock. 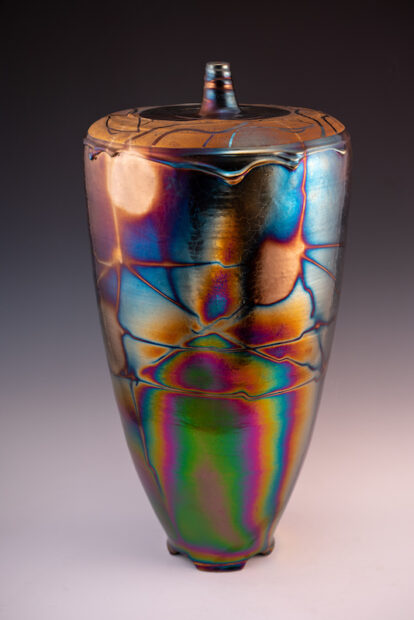 Hannah Dean: Your work is in the permanent White House Collection centered on craft, and you’ve recently been designated by Houston Center for Contemporary Craft (HCCC) as a Texas Master. Could you describe why craft, or tradition, is so central to your work?

James C. Watkins: I started out with a strong interest in drawing, design, watercolor, and painting. Really I discovered ceramics accidentally — during my year of study at Decatur, Alabama, there was a ceramics course across the hallway from the courses I was taking. I would go in and see people working together, mixing glazes and helping each other, all cooperative activity. It was festive. In my other studio courses, we had cubicles, occasionally group critiques, but that was the extent of any group activity.

One day I wandered over and asked my friend to use the wheel. He told me to go away, so I decided to make him mad and said, “Anybody can do that.” So he got up and told me to go ahead, and I made a short, dumpy little pot. And I was hooked. The challenge to find center, to create larger and larger forms… there is a satisfaction from mastering each technique. Even now I get the same elation from becoming proficient at something that requires skill and effort. 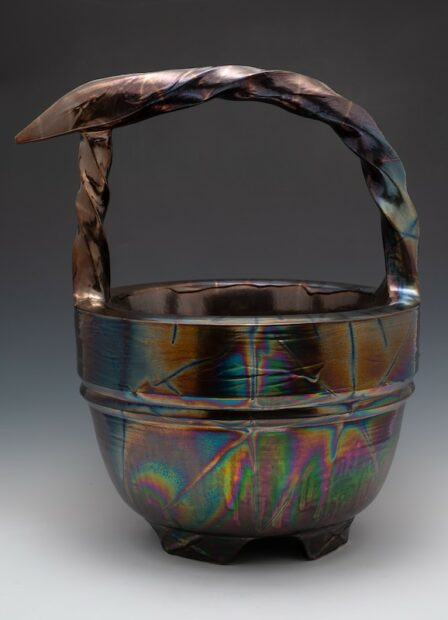 HD: Will your exhibition at HCCC be open to the public?

JW: In person, it opens [February], but we’ll see how things go with the pandemic closures. It will be on display until May 8. I’m excited about that, as well as my pieces included in the new Kinder Building (MFAH) and the Smithsonian. Retirement has been good!

HD: You retired as a professor in the Architecture Department at Texas Tech University in 2018. As an educator in both architecture and studio art, would you say there is distinction or focus? Where do they differ?

JW: At the time [I was teaching] there was a strong relationship between architecture and the handmade fine arts, now less so, because of the emphasis on digital work, 3D printers, and laser cutters. I taught watercolor, free-hand drawing, architectural ceramics, and figure drawing as part of architecture. When I moved to Lubbock and had the opportunity to teach, I was part-time in Art, and part-time in the [College of] Architecture, and eventually was offered the full-time position with the caveat that they accept my studio research. Because of that I was able to write books with James T. Davis. Today, there is a small portion of drawing incorporated into design courses, but in my opinion that is something like skim milk drawing. 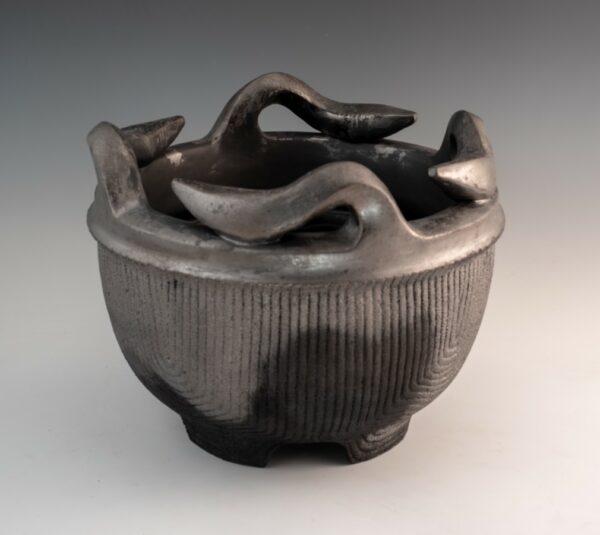 HD: [Laughter] … Would you say your work shifts to the mood of a place? I know you use materials [dirt, clay dug in situ] from specific places in your work.

JW: Very much so. There is a story to each piece, and I can pinpoint influences from art residencies where I spent time in Japan or China, or when I taught in Vietnam. Things I saw, tastes and colors. I keep a dream journal, as well. So, yes. In Texas, having lived here for 40 years, there are definite forms, shapes, colors, and materials.

[When I first moved here] I started camping and hiking near the Texas/Mexico border. I’ve always been a Boy Scout, and was raised by farmers, connected to the land. I would plow fields with my father, him with his big red tractor, me on a small John Deer tractor. I saw the furrows made by the plow as a drawing on the landscape. In Lubbock, there are furrows carved by the miles, and I started carving the clay surfaces of my pots.

And the dust storms, oh man! I moved here Christmas Eve of 1977… you were probably a kid.

JW: [Laughter] There had been a dust storm, and the collected dirt and debris formed at a triangle against the curb. I thought “wow!” So I got out and gathered some. The dust was so fine I thought I could make slip with it. I swept out a garage where I lived that had a hole in the window, and made slip with all that, too.

HD: What experiences or relationships most affect your work?

JW: Huh. Now, now I have a body of work, and knowledge — it plays off itself. I have a gallery here at the house, a clean space I can go and look and contemplate how I could do something differently, so I don’t think I’ll ever run out of inspiration. I have plenty of past experiences, and past failures, as a source of inspiration.

HD: You mentioned your dream journal. What’s the correlation or importance of language — words — to your work? Is the journal filled with writing? Sketching?

JW: It’s a combination. Recently I wrote a catalogue that chronicles 35 years of teaching, and it was written through dreams. That might sound weird, too hippy-dippy… . Once I heard about a tribe of people, the Senoi in Malaysia, who were studied by anthropologists. People claimed they were unique because they would gather daily and discuss dreams they had. From this they had new inventions, ways of forgiving people who had harmed them, even better health. They would go to sleep saying “I’m going to remember my dreams,” and eventually, subconsciously, they did that. It’s called lucid — aware dreaming. In dreams, you say, “Okay, I’m dreaming.” And I can really look.

Seems like I’m much smarter when I’m dreaming. For my book I thought of an idea I’d want to work on and my paragraphs would come to me in my dreams. It was written that way. 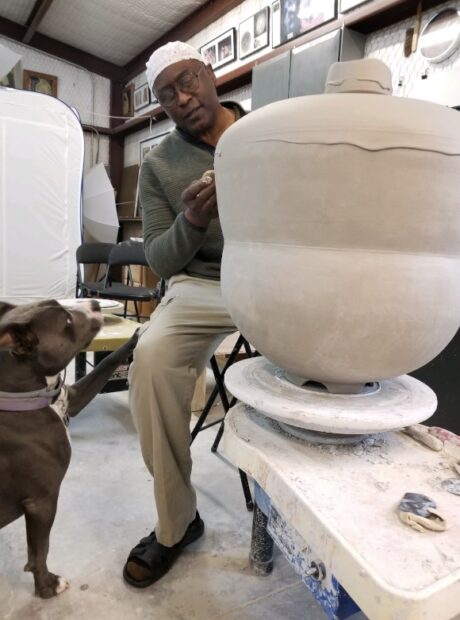 HD: I remember in Junction [at the Texas Tech University summer Masters in Art Education Program] when I was a student in your ceramics course. The ease with which you pulled a massive double-wall pot while calmly talking about something else was astounding. It was like watching someone do something rote they did every day — like tying their shoes or brushing their teeth. How much of your life do you think you’ve spent touching clay?

JW: Oh, wow. Since 1970… . I’m still excited about it, still learning. Right now I’m concentrating on large bottle forms that have gold lustre and radiant colors that are archival. These days I’m in the studio with Clovis, the “clay dog.” He never bumps into anything, and hasn’t broken anything. So far he will come up and sniff it and that’s it.

HD: Back to dreams. We associate them with introspection, or hope. What is your hope for yourself? For future generations?

JW: Hope. Wow. That’s a really heavy question when you have Covid … politics.

I hope for a normalcy of morale, spirituality, health. And an end of division that’s going on. It seems the things that bring us together are the arts. I’m talking all the arts. Like Amanda Gorman at the inauguration. Things that touch people make them more human — it seems to be the thing that people who don’t agree can tune into. Sometimes I feel a lot of great despair. Listening to her poem, I cried. I thought: Maybe, maybe, we will be okay.

Watkins’ work is on view at Houston Center for Contemporary Craft through May 8, 2021