From deep in the mental slurry of all the Instagram posts I have ever scrolled through, I can dredge up the memory of a flying child. He looks like he comes from money; he wears khakis and his long blond hair is flappy in the wind. The picture shows him skyward after launching his skateboard off a concrete bump. As far as photographs of airborne children go, this one is kind of boring—the skateboarder is merely doing a skateboard trick at the skatepark. The only reason I remember it as well as I do is because I admire the bump. Here it is in the rain: 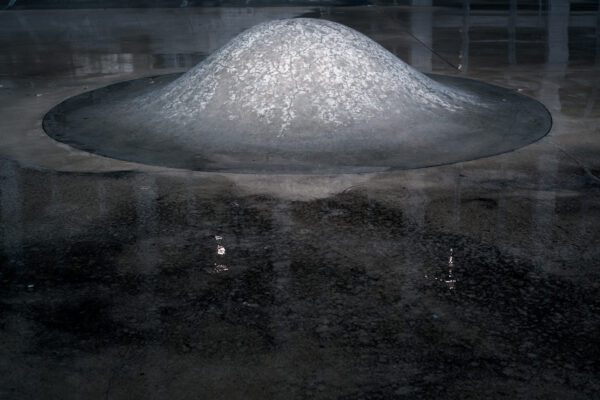 The reader may have envisioned a different type of bump. That’s fine. Even within skateboarding, the definition of “bump” can get confusing. This specific class of bulges, which a skateboarder may or may not call pump bumps, its the most fascinating. These are perfect objects. Far less complicated in design and construction than most other skatepark furniture, yet infinitely more graceful, they rise round and smooth from fields of concrete as if gently nudged upward by a giant underground fingertip.

Functionally, these bumps are as simple as they seem. Ride up the bump on your skateboard. Ride down the other side of the bump. How gratifying. Now go faster and do it again. Or do it on your bicycle. Or just walk to the top and stand there for a while, a bit taller than you are most of the time. It is a bump and it feels nice. That’s all there is to it.

In Houston there is an amateur bump, which is a subtype that appears from time to time. Presumably some skateboarders decided they would like to have a bump on their own terms, so they found an underused bit of city, made a little mound of dirt, and covered it with Quikrete. Amateur bumps like this are susceptible to irregularities. This current example is pointier than most professional bumps, and the seam where it meets up with its substrate is a tad too pronounced. Over time it collects graffiti. Should the property owner sell the land to a developer, the bump would likely disappear. The renegade builders know this, but that knowledge is outweighed by a conviction that it is pleasurable to ride over things on a skateboard. A precious, ephemeral bump, it should be savored for its idiosyncrasies while it exists. 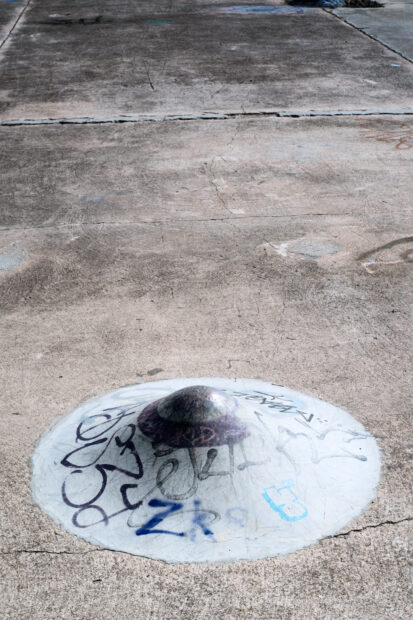 To test this bump, I skateboarded over it multiple times in quick succession and recorded my reactions in a notebook. Here is what I found:

Pretty high marks. But even people who have never stood on a skateboard could benefit from spending some time with the bump. It is quietly statuesque, a modest monument to the possibility of fun. It is also a formal oddity within the urban landscape. Most bump analogues I can think of that were not made by Anish Kapoor are hats or exist in nature: a felled tree’s burl; the weird alien hills in the desert of northeast Arizona; a zit. Domed buildings exist, sure, but domes are altogether different than bumps.

Should you find a skateboarder’s bump, walk its circumference. It will be either bigger or smaller than it seems. Revisit it at different times of day and see how sunlight acts upon its surface. Find its imperfections. Note the grace with which the world transitions from ground to bump, and back again on the other side. Bumps have the appealing physiognomy of big stupid turtles waiting patiently for food. They are welcoming, but they ask very little from those of us who choose to interact with them. The flying child mentioned earlier could have saved a lot of energy by simply riding over the bump instead of using it as a ramp. He still would have had a good time. By flying, he was trying too hard. But that is forgivable. I am in danger of trying too hard right now. 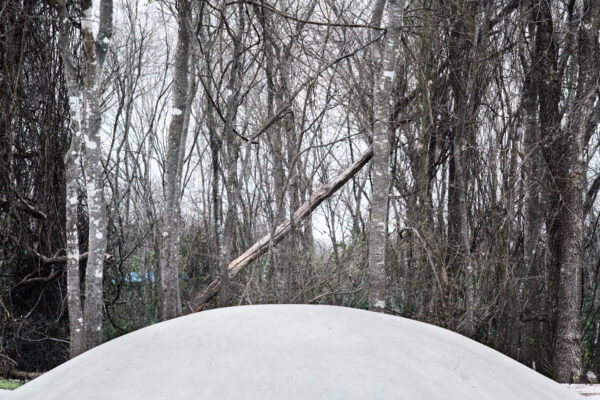 Photos and text by Bucky Miller. He is a Houston-based artist.

This and That: Yves Klein and Bucky Miller

Checking in With: Bucky Miller