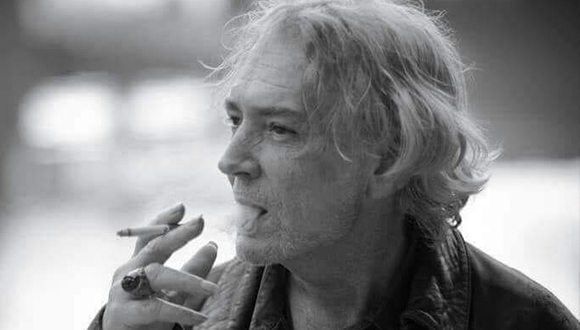 Malcom MacDonald, an enigmatic presence in Houston, has died at 64. For someone who is being memorialized by so many in the Houston art community on social media, there are scant details about his life that can be independently verified. To quote Jim Pirtle, a Houston artist and friend of Macdonald: “I think with Malcom there is no history… he was the moment… born in 1955… where… who knows… I mean he was a storyteller and liar so the myth is part of the truth.”

Some of those stories are from the people who knew him best. Here is Robert Rosenberg, one of MacDonald’s friends, and someone he lived with for a time. I spoke briefly with Rosenberg about MacDonald:

Malcom was kind of a mysterious person throughout his life, a mythical persona. He grew up in South Houston and lived with me for a while. He was just kind of a character who appeared and was around. A brilliant person who people found very entertaining, but he also went through many people, because he would wear people out.

He was homeless for a time in 1983 and would crash at Commerce Street Artists Warehouse (CSAW). Someone told me to go down to CSAW because there was a guy there running a satire dinner theater, and it was when I first met Malcom. It was 2am, and Malcom was standing next to a velvet stanchion and a tuxedo shirt and tie. The place was completely empty, except for a guy who was about to pass out as he played music, and there were ten little tables with checkered tablecloths with wax-dripped chianti bottles holding candles. We said, “Can we get a table?” And he said, “Well, we’re all booked.” It was a scene straight from “After Hours.”

The food being served up was what MacDonald dubbed Post-Apocalyptic Nouvelle American Cuisine, and after Rosenberg convinced him to tweak the menu (switching the marshmallow and Cheetos dessert to marshmallow fluff) the concept was transformed into a scene. “Everyone from ZZ-Top to Mayor Kathy Whitmire would come in,” said Rosenberg.

Among the many tributes that have come in to date are the following:

“Someone is going to have an Eternity of Hands Full. RIP Old Friend.” -Andrew Lawson

“I will tell the story like I remember it, and then let them correct [it]. Apparently a train derailed behind CSW and, Malcolm called 911 to tell them that when the train derailed, it spilled something toxic and he had been poisoned, he said he was foaming at the mouth, but then Rick Lowe, who overheard Malcolm calling, picked up the other line and said, Malcolm you’re not poisoned, that’s tooth paste. Apparently Malcolm was a ‘little” high’ and had completely forgotten that he had just brushed his teeth.” – Beth Secor

And this from Bert Woodall:

“Just learned that Malcom MacDonald has died. Two immediate memories I want to share. First, want to get this on the record right now: What other people could barely do with a straight edge and an X-acto blade, Malcolm could do with a pair of scissors, free hand. He could cut out galleys with a precise and unvarying 1mm margin. It was just extraordinary.

“Second …When Public News was on the 2nd floor of a duplex in the 1600 block of W. Alabama, we had a narrow balcony off the room where we did layout. Late one afternoon Malcolm and I were out there counting the number of commuters who were picking their noses as they drove past. I was focused on a particularly industrious prober immediately below us and I hear Malcolm say, ‘Oh, my God, look!’ I look and see an old woman laboring up the street whom I can only describe as a babushka: A mass of gray curls, stooped over in a heavy sweater on a quite warm day, black knee socks under a longish blue wool-looking dress, heavy shoes with thick two inch heels, dragging a little shopping cart.

“Malcolm says, ‘I can’t believe it. That’s me in 30 years. Just wait and see.’ I remember it as clearly as if it were yesterday. Malcolm was not quite a perfect person. But I loved him immediately and I love him still. And I’ll bet that’s true for many of us. Bless his soul.” 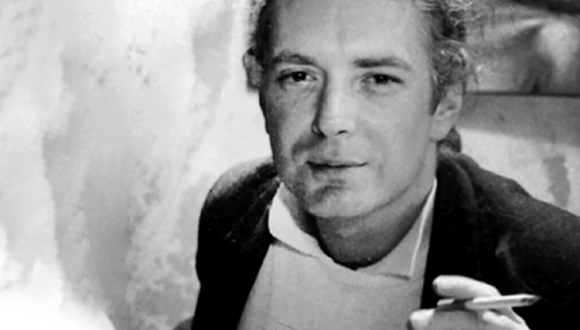 Malcom MacDonald in an undated photograph, via Wes Hicks.

Finally, this poem, posted by Fran Sanders, is attributed to MacDonald:

THE CALCULATED AND INHERENT RISKS ASSOCIATED WITH UNNATURAL SELECTIONS OF LIFESTYLE CHOICES OCCASIONALLY IMPORTUNED BY RANDOM ACCOMPANIMENT
OF A PLAYER PIANO ENGAGED IN RELAYING A WHOLLY ABERRANT ARRAY OF GOOD, BAD, INDIFFERENT SONGS UPSTAGED BY FAR OFF INCOHERENT VOICES ENRAGED BY
FREQUENT MUTTERING OF INCOHERENT CURSES AND THE RELENTLESS BUBBLING OF BONGS AND BANGING OF GONGS
A DeComposition by M.W.MacDonald

The aliens want nothing more to do with us.
They’re leaving… and they ain’t never comin’ back.
So, say goodbye to your ticket out of here, see.
Continued negligence of the standard practices
of cetacean hygiene will sooner or later result
in multiple infestations of marine vermin…
among them, whale lice.
So, say goodbye to your ticket out of here.
Whale lice are white.
Whales should bathe regularly,
wash with soap and water, and use shampoos
particularly formulated to suit their skin types.
At least twice monthly, launder all whale undergarments
with a strong, high pH detergent.
Be sure to separate white whales and colors.
Presoak.
Wash separately and season to taste.
Carefully sort the mail.
Don’t look now but there’s a conchoderma auritum
under the fridge.
God. She must really hate you.
Not alienated, not estranged… she’s convinced.
Take the car out for a spin.
Turn white on red.
Cancel that south seas islands vacation.
Bye.
Separate egg yolks from whites.
In a large white bowl add one cup white all purpose flour,
one teaspoon white Peruvian salt,
a quarter teaspoon of freshly ground white nutmeg,
a handful of white hair of the white dog,
one cup of cold, white milk.
Why hasn’t she called?
She said she would call.
Maybe she’s dead, I don’t know.
I don’t know anything at all.

High tomorrow 113, with a morning low of 84.
Variable winds with gusts up to 12 knots.
Don’t forget to throw out all that strudel,
and go to the bank.
Say hello to the newest and best in micro culpability.
Lie like your eyeballs are going to roll out of your ass.
Now, where were we?
First, we want to thank you all
for just about everything… and we really mean that.
Mrs. Brown? Mrs. Brown? Oh, Mrs. Brown.
I forgot to tell you that your purse is on fire
in the Walmart parking lot.
Bye now everybody I’ve got to go,
gotta throw it all away and smell like poop.
Bye bye, little Sheba.
Bye bye, lyin’ Ted.
Bye bye, birdie.
Bye bye, blue Monday.
Bye bye, We Buy Ugly Houses.
Bye now.
Arrivederci, bah-bah.
Now git

There will be a ceremony in remembrance of MacDonald on Friday, Sept. 27th, 7PM at Avant Garden, 411 Westheimer Rd, Houston, Texas.

Send in the Clowns (the Greatest Show on...

I just thought about Malcolm about a week ago and wondered what became of him and today I found this..hmmm. We lived together for a short period and hung out for a year or so. It was around 1986-1987. It was a tempestuous relationship, as were most of Malcom’s. We formed Mode Media which was an unmitigated disaster but not until after one of the most colorful years of my life. I learned many interesting things such as the recipe for Rack of Spam Flambe avec Fromage Whizz. One time I was rearranging furniture with him and commented that I needed an interior design miracle because I was bored with my stuff. He said he knew just the thing. So we drove to the Commerce Street Warehouse and visited one of his friends there who was trying to get rid of some old stuff. He had this monstrosity that looked like something out of an Alien movie. It was a piece of plywood about 7′ high with all kinds of objects glued to it, then canvas stretched over the objects with what looked like gallons of acrylic paint thrown over it. We hauled it back to my place. I remember Malcom and I carrying that thing the last half mile. We did get some looks. He always wore this long brown raincoat. I told him it made him look like a dirty old man but it not deter him (it was a phase). We put it in my living room which made it look even more enormous and he said “There! Exactly what you asked for, an interior design miracle.” After that, if anybody asked what it was I would say “It’s an interior design miracle. What are you blind?”