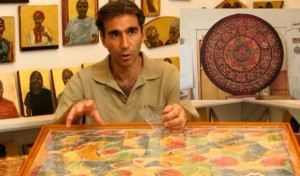 Take  minute and peruse the above links, because the Idea fund specializes in unfundable, odd ideas. Among sober, well intentioned projects about historical racism and exploited migrant workers,  artist/visionary Nestor Topchy and chef Robert Rosenberg will use their grant money to to create edible art from aromatic gelatin; served from a roadside shipping container, the  treats will  affirm the universality of archetypal geometry.  Christina Sukhgian Houle’s project will send  a dozen people to camp in Big Bend inside a large soft sculpture costume made primarily out of stuffed animal pelts.

The Idea Fund, a re-granting program administered through Aurora Picture Show, DiverseWorks ArtSpace and Project Row Houses, and funded by The Andy Warhol Foundation for the Visual Arts, chose from among more than 170 applications the projects that most exemplify artistic practices that fall outside the traditional frameworks of support, one of the main requirements of the grant.