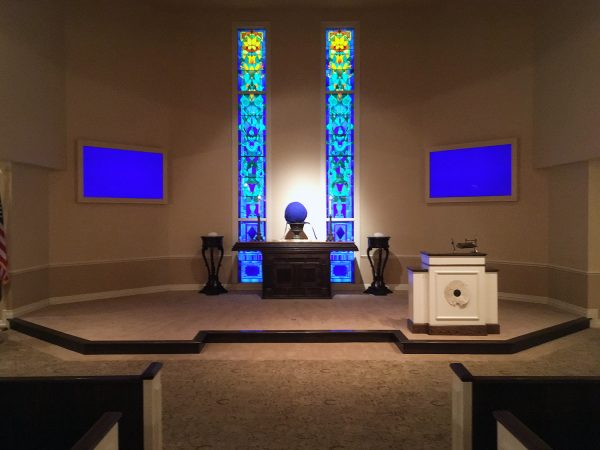 Houston artist Nestor Topchy is taking his Eternal Now exhibition to New York. The show uses the space of a funeral home to investigate the surreal landscapes of modern burial and farewells.

“Observed dryly in the context of an art exhibition, without the bleaching effect of grief to strip away one’s capacity for critical observation, this all seems pretty bizarre. But I think the artist Nestor Topchy’s recent exhibition Eternal Now was designed to draw attention to that very bizarreness, while also gently reminding us that the fancy funeral of the 21st century is no weirder than anything else human beings have done when people die. We want to bridge that impassable divide, and we’ll try anything to do so.

“Eternal Now was a one-night exhibition — or more accurately, an Everything: performance and social sculpture and immersive installation, with painting and sculpture and found art — all of which seeped into every crevice of the Geo. H Lewis Funeral Directors in Houston, and which extended out into the parking lot and even the street, with the traffic cop and doorman acting as unwitting performers in Topchy’s Gesamtkunstwerk.”

Topchy has announced that on October 22 and 24, from 5-8 pm, he will present Eternal Now at the Frank E. Campbell Funeral Chapel in Manhattan. The Chapel, which is just off of Central Park, has been operating since 1898.

Discretion. Decorum. Details. The pillars that founded Frank E. Campbell in 1898 still hold true today. At the turn of the last century, most funerals were conducted in private homes, but as New York swiftly became a vibrant city of apartment dwellers, fewer and fewer families had room for large gatherings.

Recognizing a need, Frank E. Campbell created what was then known as ‘The Funeral Church.’ He also saw an opportunity to relieve grieving families of many of the details and arrangements that funeral planning entails. In his staff, he instilled an understanding of the value of courteous service to all client families, regardless of social or financial standing, religion or ethnicity. This remains our guiding precept.

Throughout our history, we have had the great privilege of serving families from all walks of life as well as dignitaries, royalty and members of the arts and entertainment community.

There are times when nothing short of the best will do. This is one of them.

give those NY’ers something to chew on!