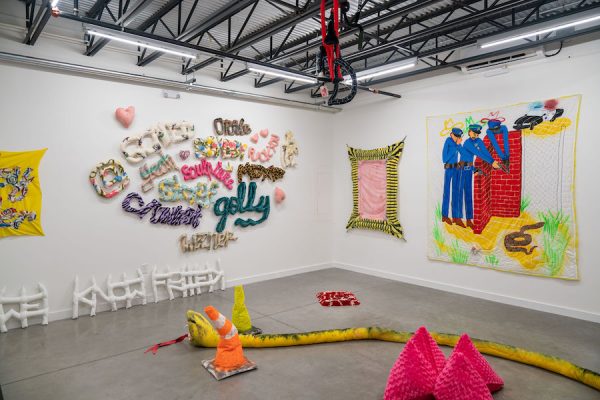 The acronym M.A.S.H. suggests two American cultural artifacts. Stylized as M*A*S*H, short for Mobile Army Surgical Hospital, it’s the 1972-83 primetime TV drama-comedy about US army doctors in the Korean War (an eponymous film, based on an eponymous novel, preceded the popular show). Alternately, MASH is a fortune-telling children’s game, played with paper and pencil, wherein one employs numerical chance to determine their future spouse, progeny, means of transportation, and dwelling — either a Mansion, Apartment, Shack, or House. At Co-Lab Projects in Austin, Austin-based artists Alexis Mabry and Steef Crombach have teamed up to present their own acronymal take. 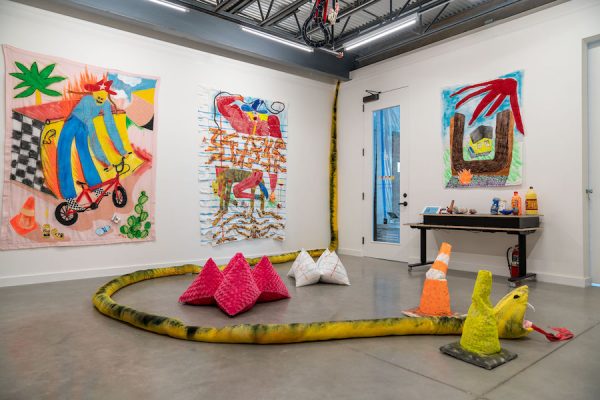 Comprised of individual and collaborative works, “M*A*S*H” is a psychedelic and tragicomic exhibition of soft sculpture, quilting, found fabric, and tapestry. The materials and techniques have roots in “traditional” women’s domestic crafts, but Mabry and Crombach have wrenched them towards unconventional, hallucinatory ends. Juiced up further by irreverent iconography, the show upends gendered expectations about how materials ought to be employed. The objects on display are less like home goods, and more like insolent props for an unwholesome funhouse. 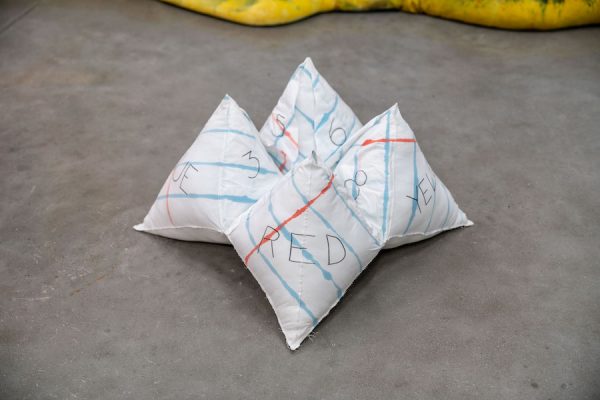 At my elementary school, paper fortune tellers were deemed the purview of girls. Mabry and Crombach sardonically exploit that binary, suggesting that potentially demoralizing futures determined by cold, cruel chance are for everybody. There may be a little jab in there, too, at male artists celebrated for their employment of chance procedures. Weren’t John Cage’s scores, really, just compositional cootie catchers? 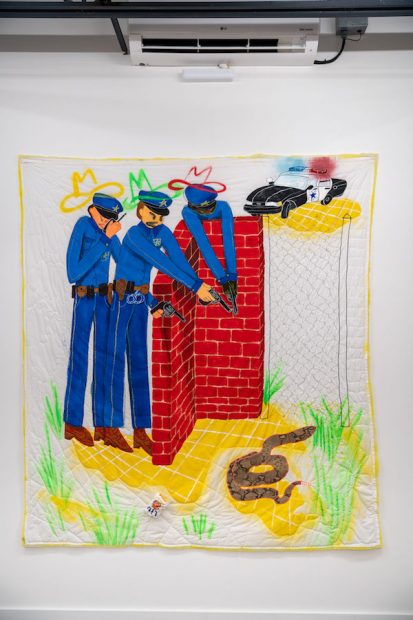 In Mabry’s The Cops, a large quilt-as-tapestry, three cowardly police officers with halo-like cowboy hats shield themselves behind a brick wall, preparing to unload their service weapons on a rattlesnake. Momentarily, it’s a slapstick image of authority figures with their asses on display. But after the laughter, the showdown depicted is chilling, a sobering reminder of the impunity with which increasingly militarized local police forces murder black people.

Like a lot of consequential satire, The Cops needles its audience. M*A*S*H the TV series was critically lauded for rebuking the then-happening Vietnam War with subversive humor. Whether or not the casual mainstream viewer synthesized the dissidence is an entirely different question. In American entertainment, the troops, the cops, and the cowboys get lionized by virtue of representation; anti-heroes are still heroes. Since Mabry appears to be drawing from the history of anarchist aesthetics, I’d wager the subtle critiques of imperialism broadcast by M*A*S*H were not, by her standards, particularly radical. 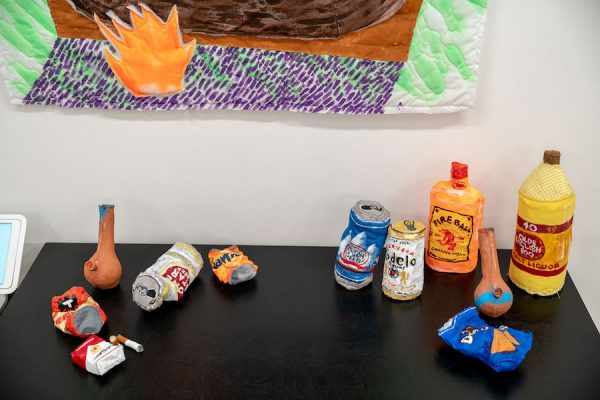 For Mabry and Crombach, “mash” is a verb — as in pureed, pulped, or pounded. Their objects looked worked over, brutally pummeled, yet seductively plush. Crushed beer cans, snubbed-out cigarettes, BMX bikes, automobile tires, and a diminutive buck are warped and cartooned in found fabric and quilt batting. The pieces appear effortlessly juvenile, then reveal themselves to be hermeneutic, though waggish, meditations on gendered American power dynamics. Where Yayoi Kusama, in her pioneering Accumulations soft sculptures, caricatured the phallus itself, Mabry and Crombach instead generate deep-fried-meme surrogates of career paths and consumer products marketed to the male id. 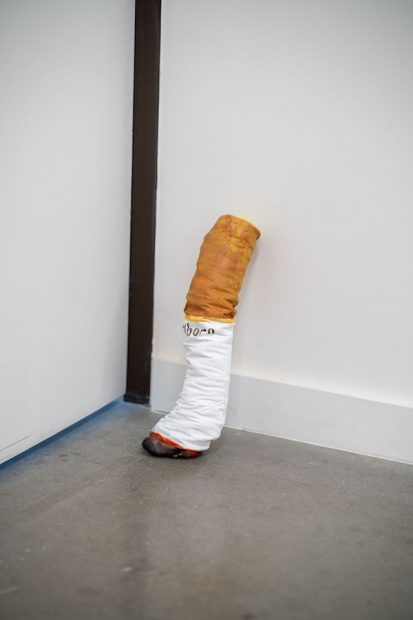 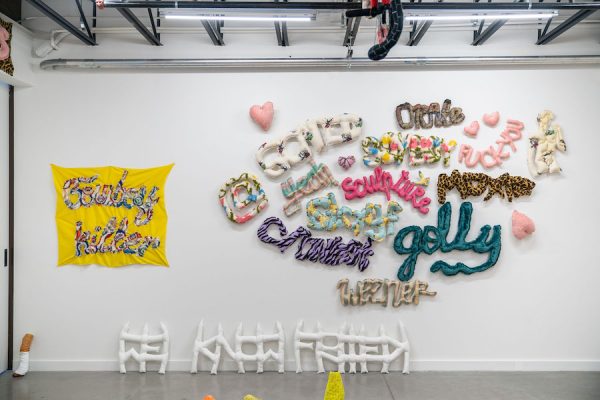 Crombach’s WE KNOW FRIED and Colloquialisms are aggressive, cheeky text-based works. Cowboy Killer though is the standout; its fabric and foam embody the exhibition’s humming dualities. An overt reference to Marlboro brand cigarettes, it further nods to Mabry’s slumped soft sculpture, Cigarette, a few feet away. Here in Austin, those ubiquitous, mammoth and spiky American aloe plants are also nicknamed “cowboy killers.” Getting tossed off a horse into one might very well lead to death-by-impalement, although these days it’s more likely to be a drunk tech bro tossing himself off a scooter. 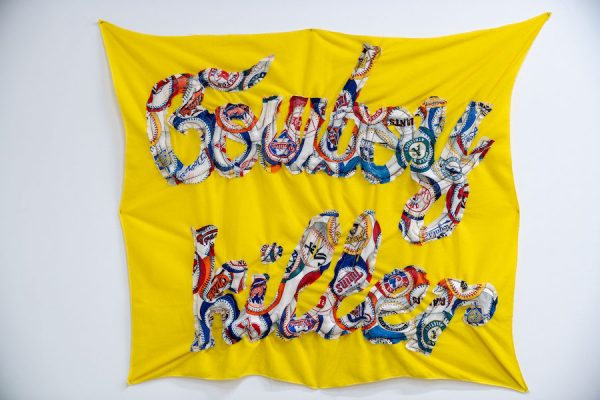 With its baseball team fabric script, the colorful Cowboy Killer would blend into the stereotypical American boy’s bedroom, if only its puffy legend didn’t endorse androcide. The tongue-in-cheek pseudo-flag is an Etsy-fied, Texas take on Valerie Solanas’ 1967 satirical SCUM Manifesto (which famously called for the eradication of the male sex). Viewed in context with Mabry’s The Cops, it recalls the spirit of Body Count’s thrash anthem “Cop Killer.” Its boyish aura, however, is maybe more in line with the sinister, synthy John Maus tune of the same title. 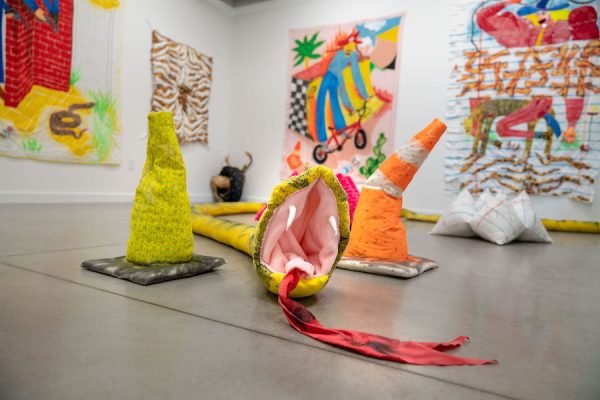 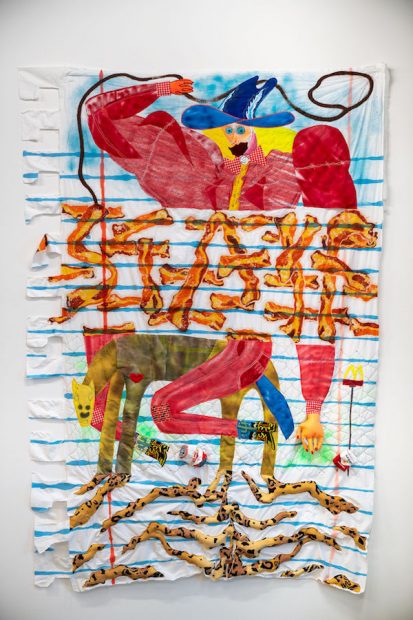 Something that rowdy exhibitions like “M*A*S*H” must contend with is whether there’s too much in the room, or not enough. Should the installation go full imbroglio, à la Jason Rhoades? Or opt for a more dutiful, Aurel Schmidt-style presentation where discreet vulgarities enjoy some breathing room?

By exhibiting only a selection of their wall works, Mabry and Crombach might have presented a “respectable” painting show, though I doubt they’d be very interested in that. Instead, “M*A*S*H” simmers — a little anxiously, actually, like it wants to explode into an all-out immersive environment but isn’t ready yet. Conceivably, that’s in the cards for a future collaboration. If this show is any indication, they’d knock that out of the park. For now, Mabry and Crombach have offered up a risibly astringent collection of objects that push materials into novel directions. En route, masculine consumer products and media tropes get gut-punched, wedgied, and pushed off the playground.