by Neil Fauerso May 1, 2017
FacebookTwitterEmail 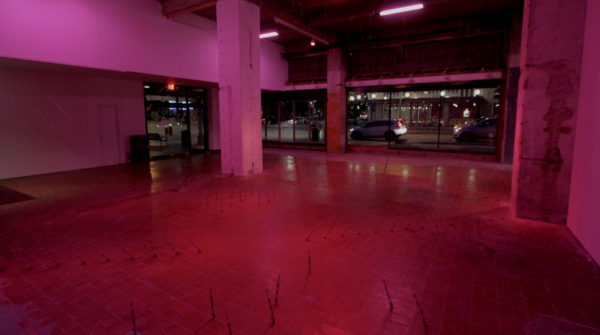 Co-Lab Projects’ Demo Gallery in Austin is one of the best spaces in town. Just doors down from the Paramount Theatre, the space was originally a parking garage in the early 20th century, when a parking garage was viewed as extremely luxurious. There’s the original faded logo for 5-cent parking painted directly on crumbling concrete. The floors are clay tile, the ceilings are high. It feels like a gallery Daryl Hannah would work at in a movie from the ’80s.

The space is put to good use with the technically ambitious String Room by Maria Chavez. Chavez, a Peruvian-born sound artist based in New York, has installed an intricate set of hyper-taught piano wires from floor to ceiling in minimal patterns. Hot pink track lighting on the wires gives the piece a Michael Mann-like visual glissando. 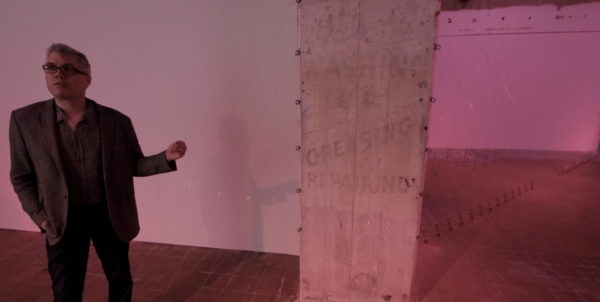 The sharp piano strings have an actual menace to them. The process of installation was labor intensive and somewhat dangerous. The strings had to be knotted and cinched without snapping. And piano wire after all is the weapon of choice for old-timey movie gangsters—you know the scene, where an assassin garrotes a character who catches the wire with his fingers and the brutality of the scene is accentuated by the fingers being sliced off. At Co-Lab, those kind of associations float with the dust mites in the light beams through the strings. And they’re not merely daydreams; Co-Lab enforced a strict three-drink maximum at the opening, out of the very warranted concern that someone would get too faded and trip and slice their carotid artery. Even still a string was snapped. The visual aspect of the show has a torque to it—an energy, like a suspension bridge. 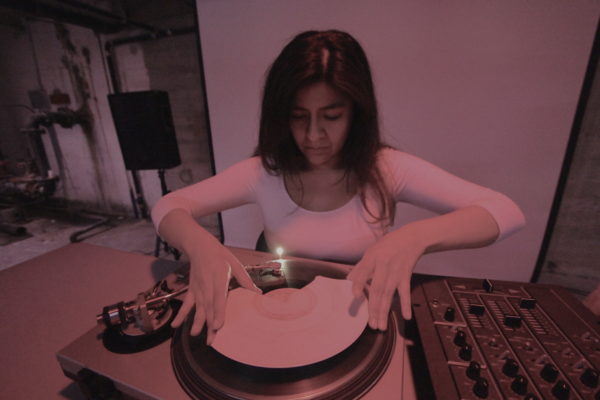 Less successful is the sonic element of the show. Upon entry, you’re given a guitar pick with the idea that you can pluck and strum the strings throughout and make a cacophony. Underwhelmingly, the strings don’t have much sound or resonance. It’s a flat dull plunk. A feature of the installation was to allow local experimental musicians and sound artists to “play” the piece, but the performances I saw felt a bit dorky and futile, like beginner parkour videos. Chavez is a serious sound artist and DJ—her experimental turntable works use a strange (and to record collectors such as myself, somewhat horrifying) methodology of running a needle through fractured obstacle course of broken records, producing sickening sound pieces that sound like if Coil or Lustmord played during the actual end of the world. So I don’t think the acoustic element of the piece is failure; I think it performs as intended. But, given the racy, lustrous visuals of the piece, I was expecting the sonics to have ghostly pickup of an Aeolian wind harp. Perhaps the contrast is intentional. “Life is disappointing,” as the lady says cheerfully in Tokyo Story.

Like most booming capitalist cities, the downtown of Austin is less and less hospitable to non-profit art spaces and Co-Lab only has a few months left on the Demo space. I appreciate the effort and rigor in the wind down.

Through May 6 at Co-Lab Projects DEMO Gallery, Austin