A 30-year veteran of Conceptual art has called Austin home since 2006. You may have met Claude van Lingen, the cordial gentleman with that almost unplaceable, soft accent at a local gallery reception. Thanks to Co-Lab Projects, who staged a mini museum-worthy retrospective of his ongoing series 1000 Years from Now, art-lovers unfamiliar with his investigations have an excellent opportunity to make up for lost time. 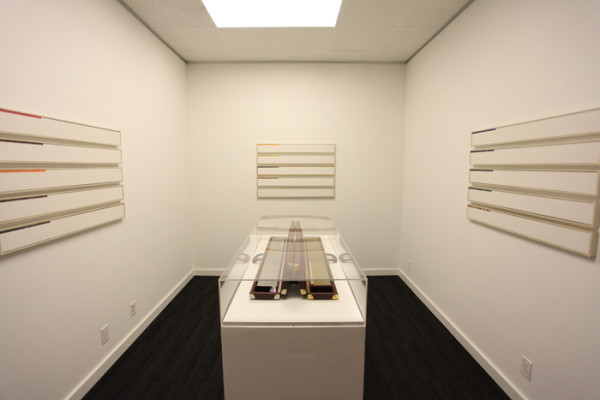 The exhibition is not chronological, instead emphasizing recurring themes across various media. However, benchmarks of van Lingen’s foray into prospective time—that which is imminent or curiously mutable—are displayed together in N Space’s back gallery, helping to put the artist’s process in order.

Van Lingen had a eureka moment when he relocated from South Africa to New York City in 1978. His earliest works, flexible polyurethane sculptures shown at major Johannesburg galleries and the 1975 Sao Paulo Biennale, were expensive to produce and ultimately impermanent, and they remained behind when he entered Pratt Institute to pursue an MFA. One fateful day at Manhattan’s Pearl Paint—gateway for countless artists—van Lingen forged a new path. “I came across the display of oil paints from different manufacturers across the globe,” he said. “The thought came to me that it would be interesting to take six of the same colors…from a number of different manufacturers and paint them on adjacent panels, and see to what extent the colors of the different companies were the same, or how they differed. This led me to think that, if I bought the same color from a particular company a few years later, would it still be the same? This also led me to think how colors would change over, say ten, one hundred, or a thousand years.” 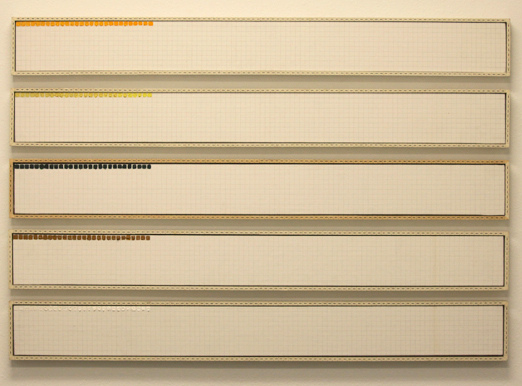 A simple idea—Winsor & Newton oil colors throughout the years—but with career-defining consequences. He divided large canvases into 1,000 rectangles, dating the frames 1,000 years into the future, and proceeded to apply one blob of color straight from the tube each year, represented here by the fifteen-part 1986-2985 Colors Basic to the Artist’s Palette. Another illustration of dynamic linear time, albeit with more luxurious materials, is 1000 Years From Now, 1979-2978, cast gold and sterling silver cubes filed and polished by the artist and housed in handmade leatherbound cases. These are the logical counterpart to the oil paint grids, for what is more changeless than precious metals? 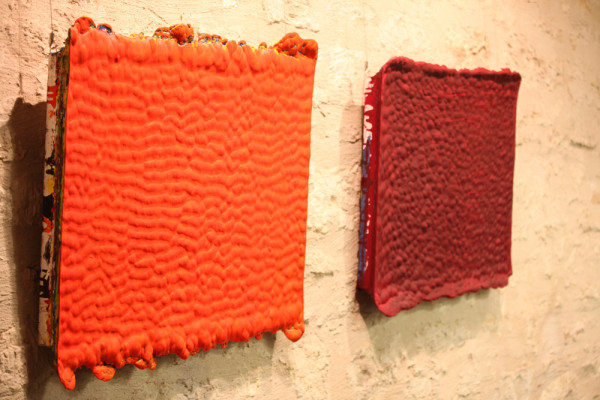 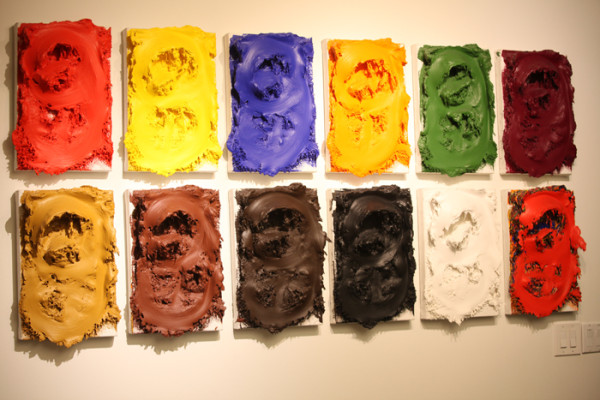 While continuing both series, van Lingen shifted to nonlinear and experiential time, swapping grids for superimposed words and acrylic paint layered mille-feuille style, and compressing time to a solitary point in the process. In Quinacridone and Random Colors, we sense the weight of these impossibly colorful, 1,000-layered paintings without having to heft them from their harnesses (don’t even attempt it: they weigh nearly 120 pounds combined, minus the canvases). They are condensed relatives of his 2000-3000 Millennium Series, a dozen canvases of layered numbers rendered in acrylic, not unlike slathered cake frosting, each a melange of Roman numerals but with “9” as the final defining shape (as the artist reminded me, the millennium ends on a “9”). 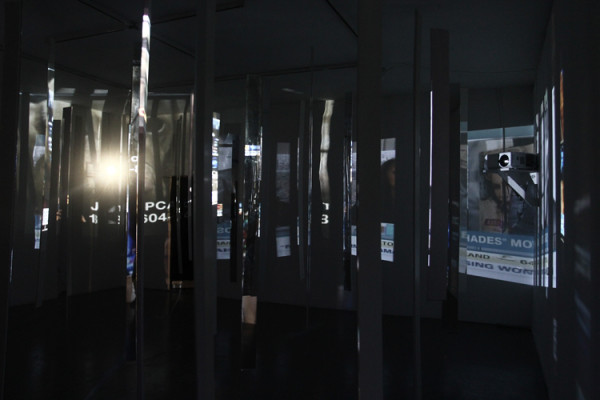 In November 2009, Co-Lab’s East Austin Project Space presented van Lingen’s audio-visual installation 1000 Years From Now. In it, a grid of mirrored planks suspended from the ceiling spun as four video projectors blasted streaming TV entertainment and news programs in a multisensory cacophony. Van Lingen said it reflected “the chaotic zeitgeist of the times in which we live, and my deep concern for the future of our planet both environmentally and politically.” Plus, the mirrors captured viewers’ reflections for fleeting instances, thrusting us straight into the media maelstrom. 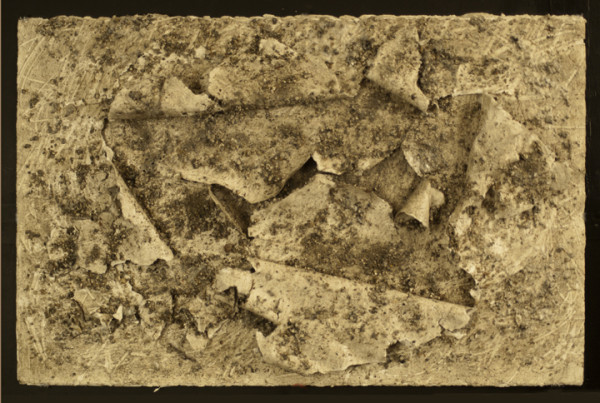 Locally, van Lingen may be best known for his works on paper, dense clouds of shiny 6B graphite scratched and torn by ultra-hard 9H script. “Memory is layered,” he explained, “so I started layering dates, one on top of the other…and that slowly developed into writing names and phrases. What happened of course is, using soft (6B) pencil in the beginning and a hard (9H) pencil on top, the paper would rip and tear.” One resounding example, van Lingen’s 9/11 Memorial Installation, is not included in the N Space show. Exhibited with Co-Lab, the show encapsulated the brutality of that morning, and echoed the wreckage itself, in a grouping of tall, torn shapes. Likewise, van Lingen’s Sandy compositions, referencing the 2012 hurricane and utilizing dirt from flooded streets in lower Manhattan, are a universal depiction of nature’s wrath. Granite Mountain Hotshots Memorial pays homage to fatalities of the Arizona wildfires of this past summer, the sixth deadliest American firefighter disaster. 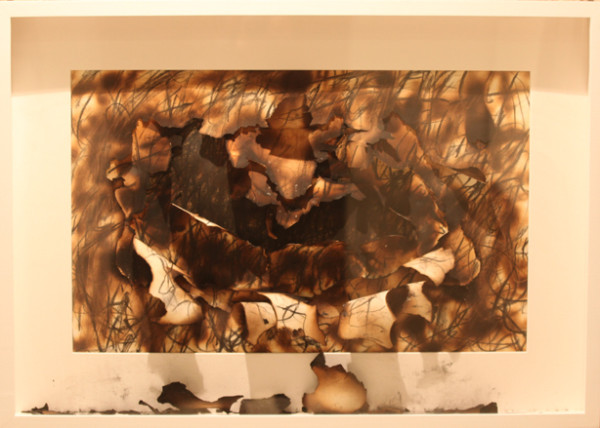 Tragedy and loss are terrifying unifiers. It may occur in another part of the country or on the other side of the globe, but when depicted as raw wounds of ripped paper or silken landscapes of falling ash, we better discern their universality. The details may be abstracted into oblivion, but the pain and humanity behind them is something we can feel and just might be unable to easily forget. Even the passing of time itself is frightening, as we grow older in an uncertain now. Van Lingen embraces this, lining out orderly processions of subtle tonal shifts and imprinting the memory of an instant under countless pencil strokes. As his exploration continues, we would do well to slow down and take in 1000 Years From Now, reflecting on past experiences and an unknown—though perhaps far more shared—future. It won’t be a waste of time.

Thanks so much to Glasstire and Brian Fee for this wonderful article on my show at Co-Lab’s N Space.

All the best to one and all for a Healthy, Prosperous and Happy New Year, you deserve it.