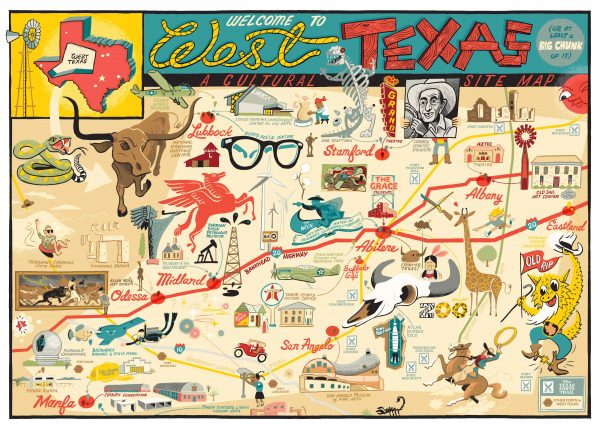 The Old Jail Art Center, a non-profit art organization located in the small Texas town of Albany, has recently released a new West Texas travel guide. Covering most of the region, from Albany to Marfa and San Angelo to Lubbock, the fold-up map features the normal cultural stops you’d expect — like the Grace Museum in Abilene, the Chinati Foundation in Marfa, the Museum of the Southwest in Midland, and the Louise Hopkins Underwood Center for the Arts in Lubbock. It also includes more obscure attractions along the way, many of which have stops all across the region, including: various Texas forts, decommissioned intercontinental ballistic missile silos, and various Works Progress Administration post office murals.

Patrick Kelly, the Old Jail’s executive director and curator, told Glasstire that this project came out of an idea he gleaned from a 2017 American Alliance of Museum conference in St. Louis where attendees were given a folded map to the city. Since the West Texas region is quite spread out, a map of it makes sense — many individuals traveling out to Marfa, for example, are unaware of the other arts destinations they pass through to get there. 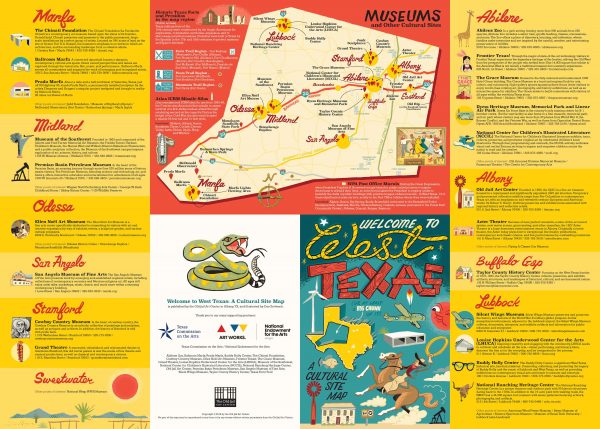 For the design of the publication Mr. Kelly contacted Missouri-based illustrator Dan Zettwoch, who then researched and created renderings for the various institutions and landmarks featured on the map. After hours of labor by Mr. Zettwoch and by the Old Jail’s staff, the guide was ready to go. Ultimately, 7,500 guides were produced, with 250 distributed to each institution on the map.

Mr. Kelly told Glasstire that the guide is already making waves, at least among some crowds:

“Recently our Marketing staff gave one to a boy around 5 years old and she heard back that he pored over the map for an entire day. I hope it will be a fun resource for all ages to encourage travel and seeking art and culture in our large region of Texas.”

The new West Texas travel guide was produced and primarily funded by the Old Jail, with additional funding coming from the Texas Commission on the Arts and from participating organizations. You can find the publication at each participating West Texas institution.

Museum of the Big Bend in Alpine Announces...

Sounds like a great gift for lovers of West Texas and to just have. Where can one buy it? I went to the Old Jail Center website and couldn’t find. Thanks.

Susana Hayward, I am the Administrative Assistant at The Old Jail Art Center. Feel free to email me at [email protected] and I can help you!

Here is a link to our website for anyone interested in purchasing our cultural Site Map.
http://theojac.org/shop/west-texas-cultural-sites-map

I do not see El Paso on the map. Just out of curiosity what part of Texas do you consider El Paso?

Sorry El Paso, but due to the size of “west” Texas and other considerations (time/map size limitations/$$$) it was necessary for the OJAC to set boundaries. We hated to leave off El Paso and other great cultural communities. That’s why the map title is “Welcome to West Texas (or at least a BIG CHUNK of it).” Maybe we can expand the scope on a second edition…if we can get funding.