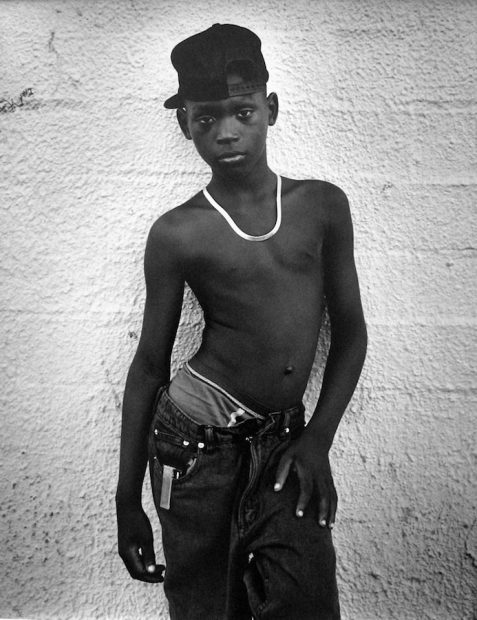 [Ed note: This is the third profile in a series by Gene Fowler on Texas documentary photographers. The first, on Ben Tecumseh DeSoto, is here. The second, on George Hixson, is here.]

Houston photographer Earlie Hudnall Jr. is best known for the richly textured humanity in his portraits of life in the city’s African American neighborhoods. Born in Hattiesburg, Mississippi in 1946, Hudnall experienced the power of words and images to shape one’s perspective on life and the world around him as a boy. “My father was an amateur photographer who documented family events and milestones,” he explains, “and my grandmother—who lived next door—was a storyteller. Miss Bonnie Jean. She would sit out on the porch with her can of Garrett Snuff and illustrate the stories that she told with our community photo album.”

After arriving in Houston on a Greyhound Bus in 1969 to study art at Texas Southern University, Hudnall learned the practical wisdom of that artistic foundation when he met TSU artist-professor John Biggers, who soon became a mentor and friend. “In the very first seminar of Dr. Biggers that I attended,” Hudnall says, “he told the students that one of the most important things he could teach us is the simple yet profound fact that ‘art is life.’” And there is great value, the photographer stresses, in creating artistic documentation of the everyday people and activities in one’s own community.

Hudnall first witnessed the “magic” of image making in high school when a physics instructor developed film and printed negatives as an example of chemical change. He bought his first camera, a Kodak Instamatic, at the PX in Vietnam while serving in the Marine Corps in 1966. After his military service, a friend told him that Texas Southern had a good art department, and he chose TSU over universities closer to home.

It was a fortuitous choice. Hudnall recalls that teachers like the painter and muralist Biggers, painter Kermit Oliver, and sculptor Carroll Simms created a welcoming yet challenging atmosphere in the TSU art department. “We could come in early in the morning, and we could work until 10:30 or 11:00 at night,” he recalls. “People would play music and paint. There would be several people working in ceramics, several in weaving, and there was always a professor on hand providing demonstrations. When I learned there was a darkroom on campus, I asked Dr. Biggers if I could use it. He said, ‘Sure man, go right ahead.’ It was like that.”

The first images Hudnall made at TSU were of fellow students’ artwork, developed in classmate Nathaniel Sweet’s room with water from Sweet’s aquarium that housed his pet turtles. Soon, Dr. Thomas F. Freeman recruited Hudnall and another student photographer, Ray Carrington III, to make images for the Model Cities Program, a component of President Lyndon Johnson’s Great Society and War on Poverty initiatives. “That’s when I really discovered Houston,” Hudnall says, “working for the Model Cities Program and photographing everyday life in the Third Ward, Fourth Ward, the Fifth Ward, the Sunnyside neighborhood, South Park. Even though it was much more urban than Hattiesburg, you didn’t have to go far at that time to get a rural feeling.” Carrington later developed a photography program for Houston’s Jack Yates High School, in which student images of the Third Ward were exhibited at the Museum of Fine Arts Houston. NPR said the program inspired students to “see Houston with different eyes.”

Aside from a short time working for Ebony magazine, Hudnall has continued working as a photographer for TSU, a position he still holds today. And though he has extensively traveled and photographed internationally to document the university’s debate team (Dr. Freeman remains active at age 99, serving as TSU debate coach emeritus), Hudnall’s most important body of work stems from the Model Cities Program days photographing Houston’s African-American and Mexican-American neighborhoods. 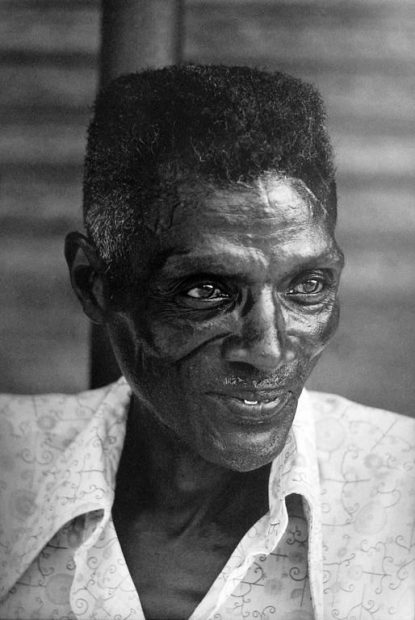 As one would expect, every image tells a story and has a story. Dr. Biggers named Hudnall’s photograph Mr. Shine, photographed in Third Ward in 1988. “When he first saw it,” Hudnall recalls, “he said, ‘Hey man, he’s like the sun. He’s Mr. Shine.’” Shortly after it was made, the photograph hung in Elton John’s dressing room—like a sunny hello from Houston—when he performed at Rice. 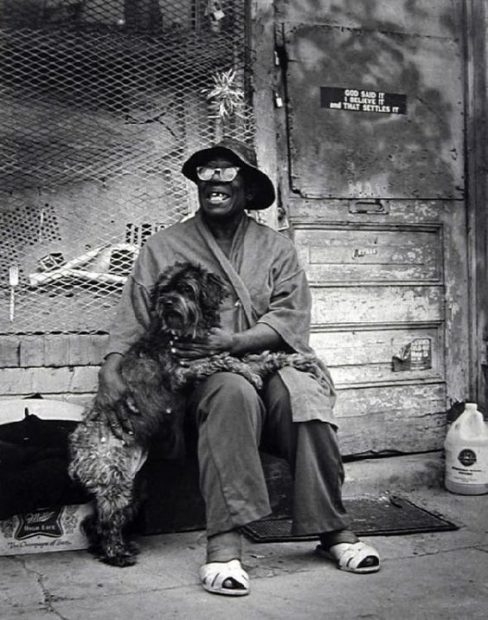 Another Third Ward image, The Prophet, depicts a woman conversing with her dog in 1980. “God said it. I believe it. And that settles it,” reads the sign on her door. “Making a photograph is an instinctual moment,” Hudnall explains. “It’s exciting— it’s a rush. When you recognize a subject that will become an image, something sets off a signal that this is the moment to snap the shutter. To me it’s a sacred moment, a special kind of excitement. You’re freezing a moment in time, and you don’t even have to speak with the subject, but you establish this magical timing with them. And that’s powerful.” 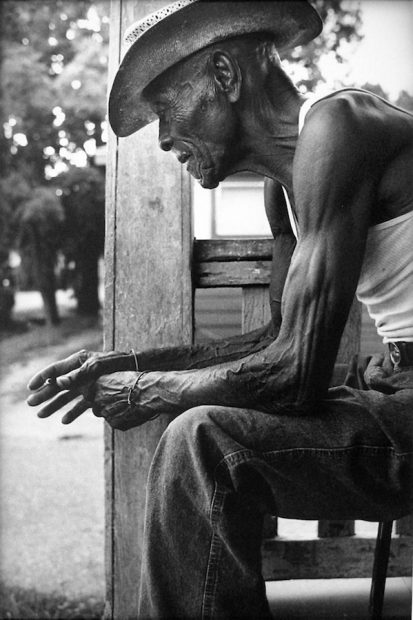 Hudnall clearly established that moment with The Guitar Player in 1982. “He lived in some apartments near the Texas Southern campus, and I would see him out playing his guitar, always with a profound smile on his face,” Hudnall says. “He said he played with Lightning Hopkins back in the day.” Describing Cowboy, photographed in Third Ward in 1992, Hudnall says, “I like to drive through a neighborhood and see a subject, then park and walk back. This man was picking up cans when I first spotted him, and I was drawn to the pronounced veins on his hands and arms and his lean, independent look. He said that he used to work down on the King Ranch, herding cattle.” 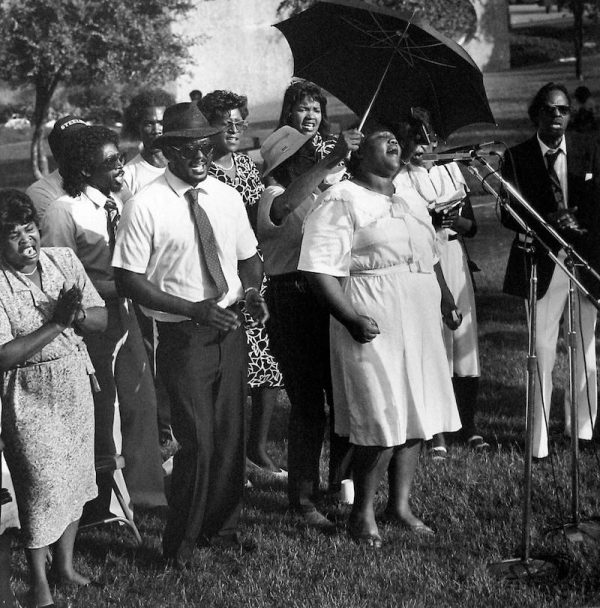 Feeling the Spirit was made in Third Ward in 1987, during a rally for the wrongly convicted death row inmate Clarence Brandley, who was eventually freed after a robust legal fight. His story chronicled in the 2002 film Whitewash: The Clarence Brandley Story, Brandley became an ordained Baptist minister after his release. 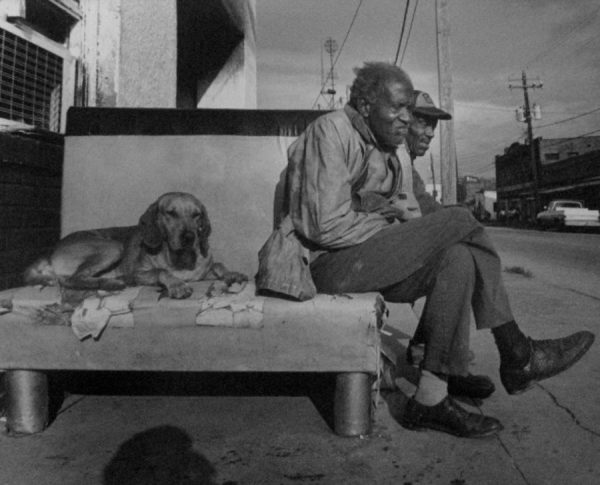 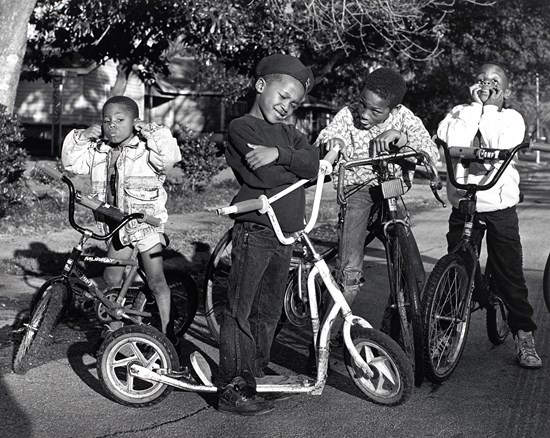 Jelly and Friends, photographed in Fifth Ward in 1983, shows two seated men who seem to be leaning into a cold stiff wind on what journalist Bill Minutaglio called Houston’s “baddest street.” Hudnall collected people’s memories of the street before it was “cut off by Highway 59. You could see B.B. King and other artists at places like the Up To Date Dance Hall and Club Matinee.” The boys photographed in the Third Ward image titled Rascals called out to Hudnall to “take our picture” on New Year’s Day in 1991. 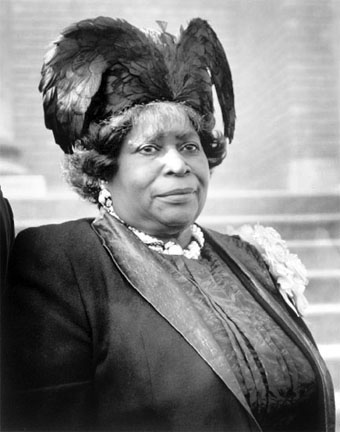 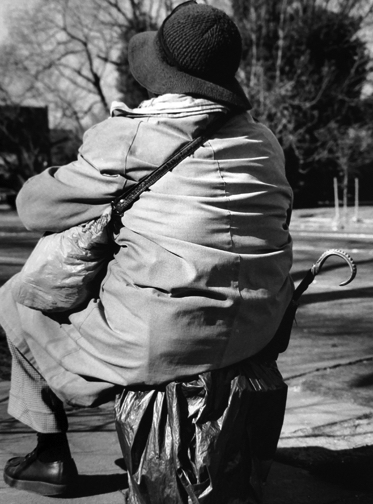 Lady in Black Hat with Feathers never looked into the camera when Hudnall photographed her in Third Ward, circa 1990. “The occasion was the funeral of Judson Robinson Jr. at St. John’s Baptist Church on Dowling. He was elected in 1971 as Houston’s first African-American city councilman. This lady caught my eye standing on the church steps, staring off into the sky.” A 1991 Third Ward image, The Traveler, depicts a woman’s back. “She looked like she’d been traveling,” Hudnall explains. “I photographed her from the back because that view channels curiosity about what is going on. Her wrinkled clothing, body posture, even her feet tells you so much about her character. She seems like a person on a mission.” 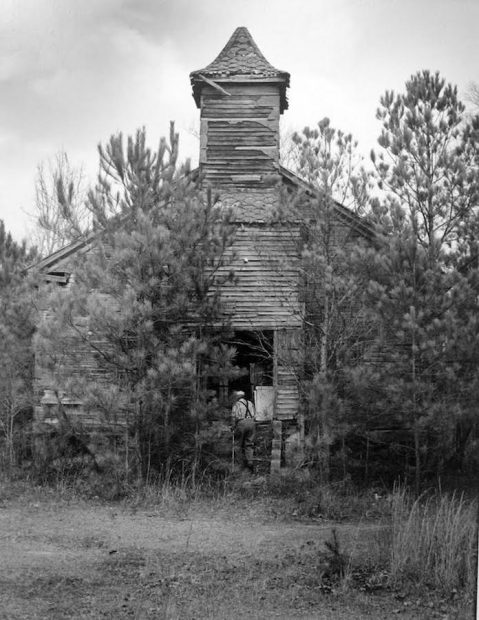 Despite having resided in Texas now for nearly half a century, Hudnall speaks of life back in Hattiesburg with vivid recollection, telling stories about folks like Miss Tiny, Mr. Crudup, about neighborhood hogs, chickens, and mulberry trees. Encyclopedia sets. Christmas bicycles. All revisited as though he’d seen them only yesterday. The elegant ruin of a house of worship in Blackwater Baptist Church, Mississippi, 1991 recalls his father’s own boyhood. “I remember going there to the church in Meridian as a boy with my father and grandmother. I remember seeing a revival wagon and the name Hudnall on tombstones. And then about 30 years later I went back to make this image.”

House with Fans Too, 1990 recalls the Third Ward yard environment of Robert Harper, aka “The Fan Man” (1935-1995). “He would collect discarded appliances, fans, and things like mannequins,” Hudnall explains, “and arrange it all like a folk art sculpture garden. Bus tours went by the home until it was destroyed by fire in 1992.” Rescued elements of Harper’s work are now part of the Orange Show Foundation. 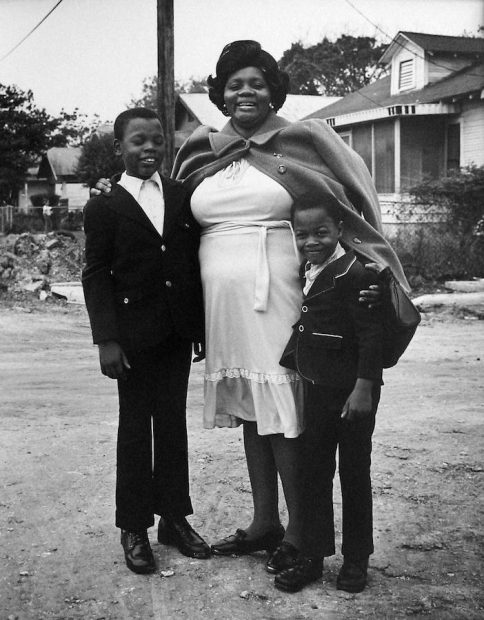 Hudnall’s elevation of his subjects from the specifics of everyday life to timelessness and universality has never diminished or sacrificed their innate dignity or attachment to a distinct sense of place. As a result, his work resides in the permanent collections of the Amon Carter Museum of American Art, Chicago Art Institute, Harry Ransom Center, National Museum of American Art at the Smithsonian, Museum of Fine Arts Houston, and many other prestigious collections. James Laxton, cinematographer of the Academy Award-winning film Moonlight cited Hudnall’s images as a major influence on the film’s visual landscape. 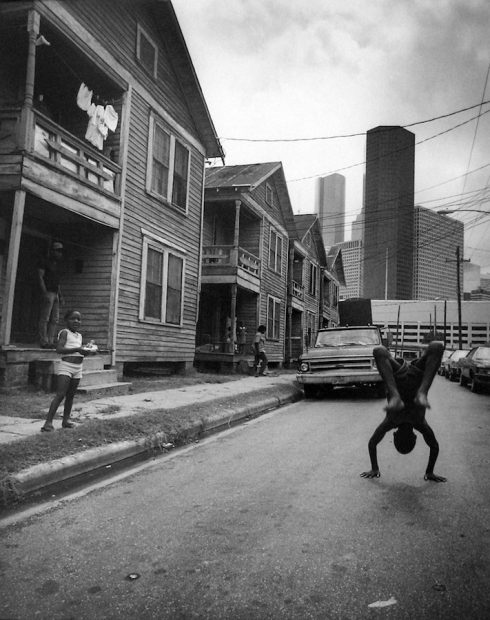 One particular image changed the photographer’s life more than any other. Happy Mama, which depicts a woman with a cigar in her mouth can be seen at the 27 second mark in this short video.“I took that photograph in the Dominican Republic when the woman smoking the cigar came out of a store and tapped me on the shoulder. Then back at TSU, I was working in the darkroom one day and looking out the window at a particular young lady in short pants. My friend Ray who was there at the time said, ‘Earlie, I don’t think you can handle that.’ But we had a couple of dates and did eventually end up getting married after my photograph of the woman with the cigar had been exhibited at TSU. And my wife told me that she fell in love with Happy Mama before she fell in love with me.”

Earlie Hudnall is represented by Photographs Do Not Bend Gallery in Dallas, and these images and more may be viewed here.
2 comments

I love the stories behind the images he made. I had the pleasure of having Earlie as my neighbor in 3rd ward. His mentoring has been an integral part of my own photographic journey.

I worked with Earlie Hudnall, Jr., during my 28-year tenure at Texas Southern University. Along with being colleagues, we were friends. Hudnall, as we referred to him in the office, is a true artist who is dedicated to his work. If you place dozens of photographers on the same or similar assignment, and ask them to submit their best photo, I guarantee you Hudnall is going to bring back, “the money shot.” He is passionate about preserving and documenting history.