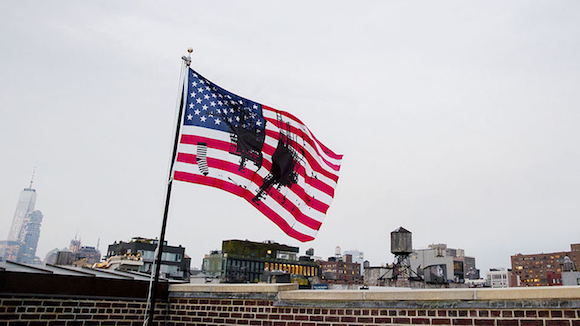 In March, Glasstire reported on the current Creative Time project called Pledges of Allegiance, a serialized commission of sixteen flags, which was launched on Flag Day, June 14, 2017. Every month, a new flag is raised at its New York location and at a number of participating organizations. We had a Texas slant on the story because the Texas State Galleries in San Marcos had raised the latest flag. 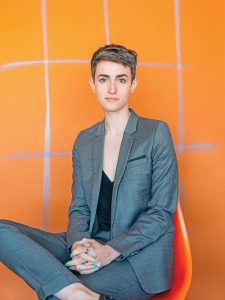 Soon after, Glasstire announced that the Dallas Contemporary’s Deputy Director and Chief Curator Justine Ludwig would be leaving to become Creative Time’s new Executive Director. At that time, Ludwig spoke about her fondness for Creative Time’s programs:

“I have admired Creative Time, with its commitment to social justice and art within the public sphere, for many years. I believe that art is one of the greatest tools we have access to in creating better communities, and am committed to a Creative Time that stays ahead of the curve and establishes the golden standard for the social impact of creative visions.”

That is basically Creative Time’s mission and the previous flags have mostly been well-received. But the latest flag project, Josephine Meckseper’s “Untitled (Flag 2)” installed at the University of Kansas, has caused a political ruckus, reports Hyperallergic. Literally political, since it started after Governor Jeff Colyer and other Republican candidates running for election in November had complained that it was unpatriotic. Secretary of State Kris Kobach added that: “The fact that they call it art does not make it any less of a desecration of our flag. I call upon the university to take down that flag right away.”

After the university’s chancellor agreed to remove the flag,the Andy Warhol Foundation for the Visual Arts decided to release a letter sent to the university:

“We stand with the National Coalition Against Censorship, Foundation for Individual Rights in Education (FIRE), and the American Civil Liberties Union (ACLU) of Kansas in our belief that it is crucial that the work be seen as the artist intended and not be censored as a result of political pressure … Artists play a unique role in our culture, igniting through their work difficult, but necessary, conversations that promote empathy and propel social change. These voices must not be silenced by those who find them threatening or distasteful.”

“Art has a responsibility to drive hard conversations. Pledges of Allegiance was begun to generate dialogue and bring attention to the pressing issues of the day. The right to freedom of speech is one of our nation’s most dearly held values. It is also under attack. We are proud to stand by artists who express themselves. Today’s events illustrate the same divisions in our country that the series has confronted head-on.”

It also quoted the artist’s response. Here are some excerpts. (For the full letter, read the Hyperallergic article.)

“I believe art should speak for itself and that it is rarely beneficial for artists to over-explain their works. But since my artwork for Creative Time’s “Pledges of Allegiance” project elicited such strong reactions, I feel that my voice as the artist should be heard. The way in which the piece was made speaks to my intent, which until now has not been discussed…..

Untitled (Flag 2) is a metaphorical artwork. I hope that within the public contexts of the organizations with which Creative Time has partnered to display the work, it can contribute to a necessary discussion about art’s role in society, who we are as a nation, what divides us, and what brings us together.

For now, the flag has been relocated indoors in the university gallery.