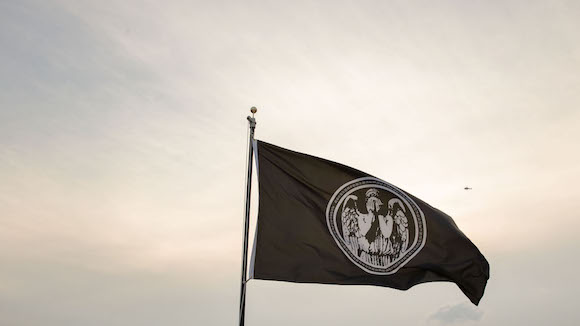 New York’s Creative Time has a project called “Pledges of Allegiance,” a serialized commission of sixteen flags, which was launched on Flag Day (June 14). Every month, a new flag is raised at its New York location and at a number of participating organizations. The Texas State Galleries in San Marcos raised the latest flag on Wednesday, designed by Trevor Paglen, who was awarded a MacArthur “genius” grant last year. The flag, Weeping Angel, refers to the name of a CIA surveillance technique (and the subject of a popular Dr. Who episode).

“We realized we needed a space to resist that was defined not in opposition to a symbol, but in support of one, and so we created a permanent space. The flag seemed an ideal form to build that space around both practically and symbolically,” says Creative Time Artistic Director Nato Thompson. An ARTnews article declares that the artist-designed flags are “raised in opposition to the election of President Donald Trump.”