The Long Slow Death of Kim Jong-un Vs. The Death of Comedy As We Know It: A Proposal 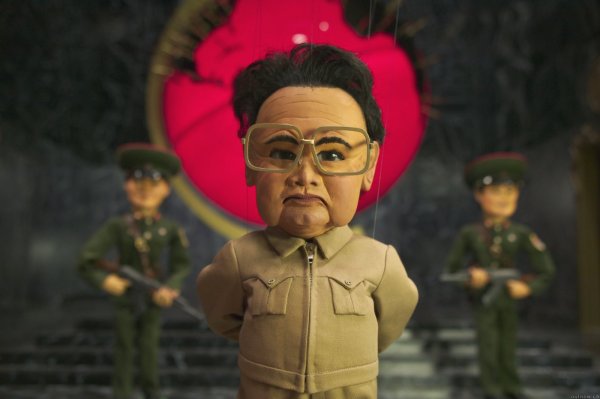 This morning I was happy to read that the Alamo Drafthouse Cinema movie theater chain in Texas was going to show “Team America: World Police” in defiance of North Korea effectively shutting down Sony’s release of “The Interview” (or rather, Sony allowing the threat to have impact). But this afternoon I heard that Paramount nixed that plan. So the phenomenon known as “By-Proxy Censorship On American Soil Due to Threats By Crazy Fascist Dictator” seems to have become a thing.

No no no. This will not do.

Here’s what should happen.

Every single thing in production in 2015—every American TV show, movie, podcast, web and radio show, cable and internet series and special, all of them—take a few minutes out during regular shooting to do a Kim Jong-un joke, and then tack it on to the end with the credits. Every episode of Game of Thrones, Mad Men, Louie, This American Life, Brooklyn Nine-Nine, Drunk History, American Horror Story, the next “Star Trek” movie, “Star Wars” movie, anything by David Fincher, EVERYTHING. The joke can be five seconds long or five minutes. It could be just a dumb knock-knock joke improvised by an actor. It could be a simple sight gag, or a complex soapy plot point worked into the arc: psych!.

If the cast has some natural comedians in its midst, let it rip. Make the joke about the death of the dictator. This is a Wack-a-Mole of Comedy Utopian proportions. I would watch the most risible reality show in the world—or at least its credits—if I knew they were going to make a joke about Kim Jong-un somewhere in there.

North Korea or any other country or leader should not have a say in what comedy looks like, or what the developed world does with it. The Americans, and of course the Brits and Canadians, have perfected satire—I would welcome these neighbors’ participation. And while I’m not convinced “The Interview” is going to be that funny (just going by Rogen and Franco’s last vehicle “This Is The End,” which should have been far funnier given that cast), and “Team America” already crushed the North Korean dictator humiliation in a way that’s probably unbeatable, I am prepared to sit through thousands of good-to-terrible Kim Jong-un jokes for a year just to make a point.

Comedy Central or Funny or Die could set up a clearing house webpage for jokes, written by comedy writers or any other kind of writers, that any production could pull ideas from when they’re in a humor sinkhole. Reddit could have one long but categorized heading for Kim Jong-un set-ups; the Gawker empire could too. (Commenters can be very funny.)

No country or set of hackers, state-sponsored or mercenary, could keep up with the endless string of jokes. They can’t shut down every single mode of production in America. If no one is “safe” then everyone is safe. And this would be a very unifying thing, don’t you think? YouTube could assemble a “Best Kim Jong-un Gags of the Week” and put it out every Sunday night. And a “Worst of” too, which would be popular in its own right. Of course then private citizens would mastermind their own jokes and get them out there. Vine would get a great second wind.

Also: Sony should release “The Interview” now, for free streaming off its own rickety website, but Netflix and Amazon and iTunes and Hulu should make it available too, to bolster it. On Christmas Day every capable computer in the free world should stream it, (whether you actually watch it or not), and Google or Facebook or Apple or whoever has the means should create a giant live-action map of the world that lights up with every household enjoying the comedic death of Kim Jong-un as depicted in one dumb movie. Send that asshole a text with a link, to make sure he sees it.

And broadcast the map site and movie in Times Square.

This is how we should respond.

From the above in today’s NYT (the writer speaks from grave experience): “It may be easy for a state or a movement to go after one writer and his publishers and translators. But it’s virtually impossible to go after thousands of them…
“The best way to counter the damage created by Sony’s surrender to the intimidators would be for all of Hollywood to unite and for every studio to make a movie with a plot similar to that of ‘The Interview.’ They could humorously kill off all manner of repugnant leaders — not merely Kim Jong-un. Such an act would be a defiant affirmation of cultural freedom and the right to produce even offensive humor. At the very least, Sony should put ‘The Interview’ online free.”