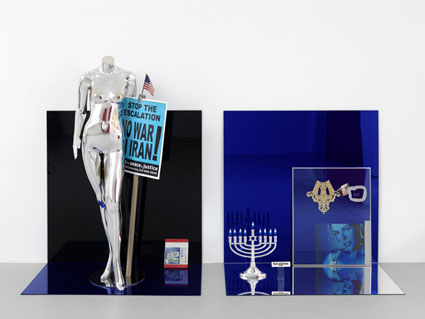 Marxist cultural theory could, arguably, be considered the defining feature of the intellectual movement of the contemporary art world. In the past 20 years, it has had an overwhelming influence on art criticism and art making. Sylvère Lotringer, founder of the journal Semiotext(e) is the guy widely credited with bringing Foucault, Baudrillard, Deleuze and Guattari to the New York art world in the eighties. When I learned that he would be giving a talk at the University of Houston on the work of Josephine Meckseper, I couldn’t resist attending.

I thought Meckseper’s exhibition at the Blaffer Gallery was one of the worst shows I’ve seen there. A hipster pastiche of Hans Haacke and Haim Steinbach, Meckseper situates various images and objects that have to do with politics, advertising and the capitalist economy’s strategic conflation of the two, on shelves and in display cases that reference museum vitrines and department store windows. In addition to her exhibition at the Blaffer, Meckseper also created a razor-sharp critique of capitalism by designing a window display for the Houston Galleria’s Neiman Marcus. 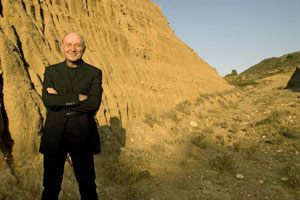 The idea of a leading intellectual like Lotringer giving a talk on a show I hated was exciting because, like a lot of petty bourgeoisie, I’m always afraid I dislike things because I don’t understand them. It’s in these moments of doubt that I masochistically turn to a theory, exemplified by Semiotext(e)publications, designed to obfuscate questionable concepts by clothing them in the white coat of scientific jargon. The influence of Marxist cultural studies on the visual arts has manifested itself as art and art criticism that takes as its reason for being the analysis of human emancipation. The purpose of art becomes an inquiry into the political, psychological and semiotic systems of domination that allow some humans to suffer at the hands of others. The culprits are legion but a general consensus has emerged that the capitalist consumer society of liberal western democracy is a villain diffuse enough to encompass racism, sexism and poverty while simultaneously preventing ideas for concrete solutions to tangible problems from emerging. While I mostly disagree with the assertion that capitalism should bear the cross of all contemporary human misery, I tend to think that in its present form, it probably causes pain to more people than it brings comfort.So in the same way that I still have a taste for redemptive Christian metaphors, I still have a taste for pesky neo-Marxists like Benjamin, Foucault and Baudrillard. Probably because of left-over masochism from a childhood spent waiting for the apocalypse, I’m drawn to the fact that despite intricate arguments against notions of truth and the existence of the autonomous subject, post-structuralists relentlessly shovel dirt out of the ground looking for the corpse of an authentic human consciousness uncorrupted by the web of politics and economy.

My suspicion that Meckseper’s work is an art world version of the simplistic, pseudo-revolutionary bullshit that catapulted Naomi Wolf to stardom was confirmed by Lotringer’s explanation that her sculpture of a walker draped with an American flag and adorned with a Bible and a bottle of motor oil was “what the last eight years were about.” He went on to reveal that her black and white wall painting of an American flag reflected the idea that the Bush administration saw the world in ideological black and white. 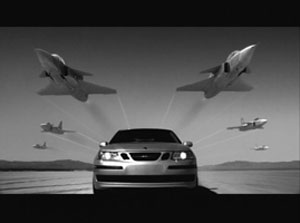 I can’t really argue with either of these assertions but I’ve already digested the Michael Moore oeuvre and I expected something more sophisticated from Lotringer. I wanted to believe that, seeing the proliferation of bearded boys and low-rise girls in the audience, he thought he could coast through the talk with some well-placed Bush-bashing. But the fact that I’ve seen the Meckseper show half a dozen times and haven’t come away with much more than he did leads me to believe that there’s not much more there. More interesting, however, than Meckseper’s cynical, exploitive exhibition was the way in which Lotringer’s talk pointed up the abusive relationship between socially oriented critical theory and visual art.

Lotringer would begin with a slide of Meckseper’s work, make a very general observation about what the image was meant to represent (i.e. signs and symbols floating freely in perverse or nonexistent relationships in the ether of the vitrine/social void), and then speed away from the work into a greatest hits of post-structuralist philosophy. In the blink of an eye Lotringer moved from Meckseper’s crappy black and white flag and boys in underwear to Baudrillard’s gypsy semiotics and Paul Virilio’s fast and furious theories of speed. This justification of over-celebrated, mediocre installation art with theories of base and superstructure is emblematic of the kind of relationship Marxist-based theory—what Harold Bloom once called “Foucault with a lot of sarsparilla” — has had with art in recent years. 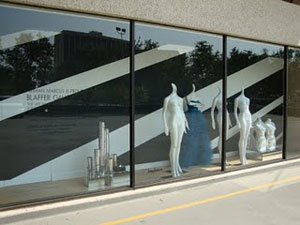 Young trust-fund artists from premium graduate schools have increasingly thrown themselves prostrate at the feet of Frankfurt School-style critical theory, offering up their tender nether regions in support of whatever social or cultural agenda the academic left finds currently fashionable. Rather than attempting to create visual art that is complicated and contrarian enough to allow new meaning to grow out of it, their work, like Meckseper’s, is created as an illustration of already baked — sometimes only halfway — ideas from the reading lists of tenured professors like Lotringer who haven’t had to worry about

It’s true that we live in a world that is in desperate need of a lot of changes. Labor is exploited, our food supply is controlled by a few morally bankrupt multinational corporations, and it’s fair to suggest that the political system in the United States has changed from something that was close to a representative democracy to something that now looks like an oligarchy. The problem is that neither Meckseper nor Lotringer will even claim her work as political. In an interview on KUHF’s Front Row, Meckseper asserted that her work was to be viewed ironically (whatever that means), while Lotringer claimed in his lecture that her work was not about politics but about the question of whether politics can be addressed by art. From a red, white and blue carpeted hallway to a silver showroom dummy adorned with a protest sign and a tiny American flag juxtaposed with a menorah, it’s pretty clear that Meckseper is not only addressing politics with art, but is doing so about as thoughtfully as Glenn Beck with a piece of chalk.

Lotringer and Meckseper —  despite her claim in a Bomb Magazine interview that she “kind of hope[s] for Joe Sixpack types with a sense of humor to walk into [her] shows,” —  seem to know that an art museum is not the place to find radical politics or plumbers. They attempt have their cake and eat it in front of their would-be critics by denying that her work is intended to serve as an impetus to social action. Completely apart from the hilariously offensive, sexist designation of everyone who hasn’t bought an education from Cal Arts as “Joe Sixpack”, Meckseper’s exhortation to take her work “ironically” seems like a passive admission that no one will take it seriously anyway. 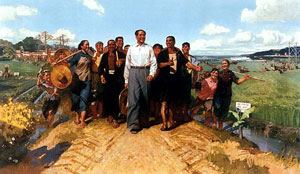 Contemporary art is an elitist phenomenon. Funding for museums and sales at commercial galleries are usually stained with the blood of poor people. But as distasteful as this situation is, I prefer it to one in which art is reduced to images of Chairman Mao surrounded by beaming children, or conceptual models of proletarian architecture. Making art and building a democratic state aren’t incommensurable, but I’ve never been able to see how one can serve as a tool for achieving the other. This is why I think Meckseper’s disingenuous pose as a trenchant cultural detective out to expose the hypnotic power of the capitalist war machine over our easily confused brains, and the post-structuralist defense launched by Lotringer to prop her up are problematic. They exploit the institutional perks of the academic left’s preoccupation with the collapse of capitalism without taking any personal or political risk.

I can’t take seriously an exhibition that proposes to critically investigate the nature of capitalism’s intrusion into the deepest aspects of our lives with a video about the auto industry’s complicit relationship with the military-industrial complex from within an institution whose major corporate sponsors are the oil and natural gas company Baker Hughes, Traveler’s Insurance, and Kinder Morgan, a Texas pipeline and energy storage company. Radical ideology can’t grow from inside a corporate funded art institution because it usually ends with a guillotine or a car bomb. Post-structuralist criticism as outlined by Lotringer and parroted by Meckseper, on the other hand, usually just ends with tenure and a pair of Gucci sunglasses. 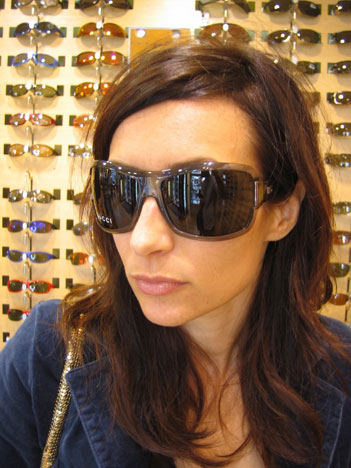 Michael Bise is an artist living in Houston.
3 comments

This critique is an excellent read, very thought provoking. It makes me wonder if irony is created out of surplus. Irony, I think, like any other kind of surplus of commodity, is largely about the hoarding and controlled expenditure of “too muchness.” So, in effect, irony can be both artful and political if the person wielding such terminology understands the depths and layers of it, and makes an attempt to meaningfully expose others to its richness. If not, merely saying one is trying to be ironic, without an in-depth explanation of what that means, is superlatively ironic. It’s just another verbal/visual heap to be added to the undeciphered excess.

As the commenter above noted, the final line of this essay is priceless: “Post-structuralist criticism as outlined by Lotringer and parroted by Meckseper, on the other hand, usually just ends with tenure and a pair of Gucci sunglasses.” It is the best evidence of an understanding of intentional/unintentional irony perceived by someone who has plunged the depths of the subject matter.

I’m glad to see everything you learned in Design 1 continues to serve you well. Congratulations on all your successes.