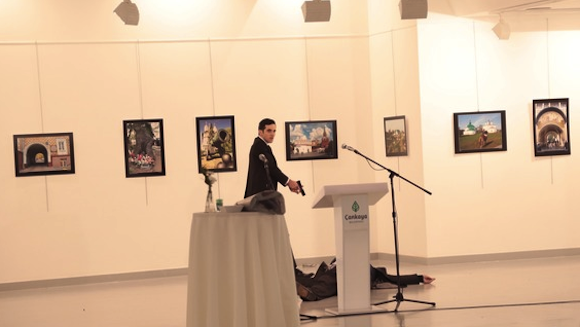 Artists have been blurring the lines between art and life for quite some time now, often causing viewers to make connections between the socio-political world around us and everyday reality (and vice versa). Yesterday, December 19th, was not one of those occasions.

Yes, it took place at an art gallery preview (of the photographic exhibition, Russia Through Turks’ Eyes, at the Ankara Center for Contemporary Art), complete with gallery lighting, a podium for special speakers, and members of the press with photographers. But the assassination of Andrey Karlov, the Russian ambassador to Turkey, was not some sort of performance art, intended or otherwise. It was simply murder in a museum.

The Huffington Post reports that Turkey identified the killer as 22-year-old Mevlut Mert Altintas, who had worked for the Ankara riot police for 2-1/2 years. Altintas, who shouted, “Don’t forget Alleppo!” and “Don’t forget Syria!” as well as slogans associated with Islamist militancy after shooting ambassador Andrey Karlov, was killed minutes later by members of Turkey’s special forces. At least three others were reported to have been wounded.

Yesterday, on its Facebook page, Glasstire posted a link to Michael Bise’s very recent article “Angel Otero Wins the Hunger Games,” to which a reader responded, quoting Bise. The conversation went like this (as of this morning):

John Zambrano: “I’d like to see fewer shows about what I see as an absolutely barren and sometimes totally dishonest utopian art narrative and more about the irrational, fucked-up, war-mongering world that, as far as I can tell, we’re living in right now. Merry Xmas. See you next week.”
Here you go, Michael Bise… Ankara Center for Contemporary Art 2016

John Zambrano: Glasstire it was in an art gallery.

Glasstire: Do we really have to have an argument about whether an assassination that happened in an art gallery was itself art? Because the answer is no.