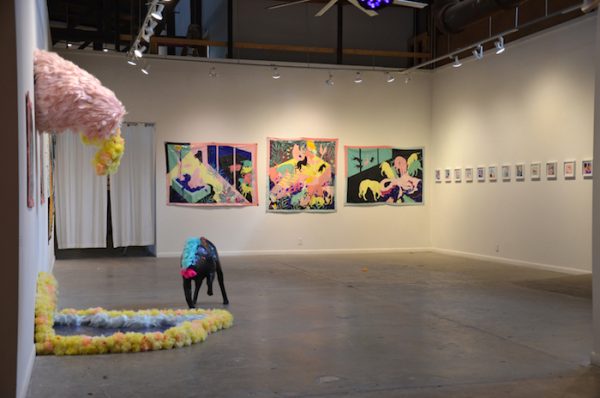 There are three worlds within Pump Project’s final gallery show at its Shady Lane location in Austin. Underneath an innocuous enough show title, The Door by the Garden, artists Nat Bradford and Tsz Kam use the visual richness of their paintings to present more explicit ideas. They team up to form a collective third set of work, linking humans and animals through their primal desires. 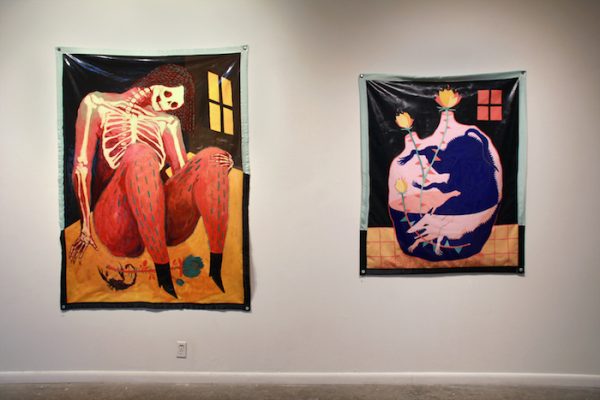 Bradford’s work hangs like banners, painted front and back on transparent vinyl. The combination of techniques creates a surface which moves from a slick flatness to thick brushstrokes, sticky like painted tar. The images are concerned with this and other dualities — front/back of the image, interior/exterior, and the relative containment/freedom of the figures depicted. Each scene is framed as a still life where a single illuminated window gives just enough information to know it’s set indoors. The chambered vases, like small homes, contain flowers and animals which live inside them. The x-ray interior view of the feral animal trapped in the vase is paired with a woman, the bones inside of the vessel of her body. She is continually made more insular with her curled-up posture inside of the house. There are multiple layers of containment. In the similarly composed painting, Very Full, a fire rages inside of the woman’s chest and burns through her skeleton. Her body an insufficient container for the enormity of human emotion.

Next we become voyeurs in the decorating hookup between a love hotel and an early ’90s roller disco. Cake, sex, baths, and lounging on plush furniture in brightly colored rooms are recurrent through the 20 small paintings. Kam’s interiors are full of only the good stuff. We’re seeing an intersection of sexual desires and food consumption, so it’s fitting that the paintings themselves are as visually delicious as the cakes and candy they depict. 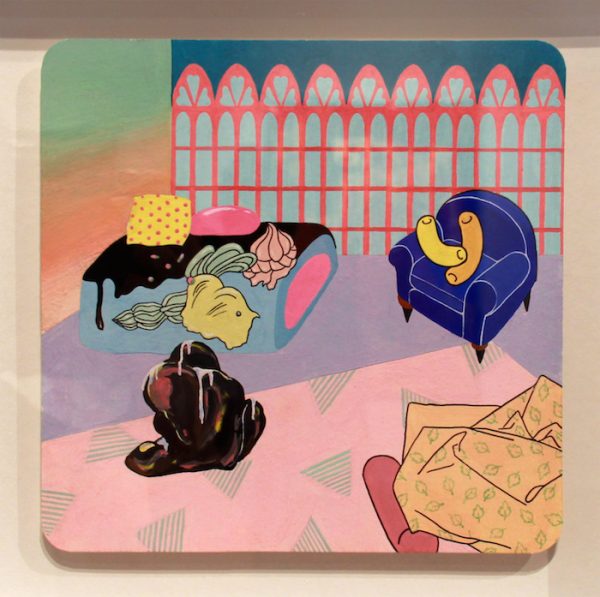 He Likes to Watch

Anthropomorphized macaroni noodles provide a focal point for the miniature narratives and present an amusing simplification of the human form down to being just this tallish thing that has two holes. The titles give a voice to the characters of each scene. In He Likes to Watch, one noodle sits on another’s lap and it isn’t totally clear who’s doing the watching. Searching the image, my best guess is the jizz-covered abstract blob. The ambiguity creates a fun mental exercise in deciding which things are active players in the scene and which things are their toys. 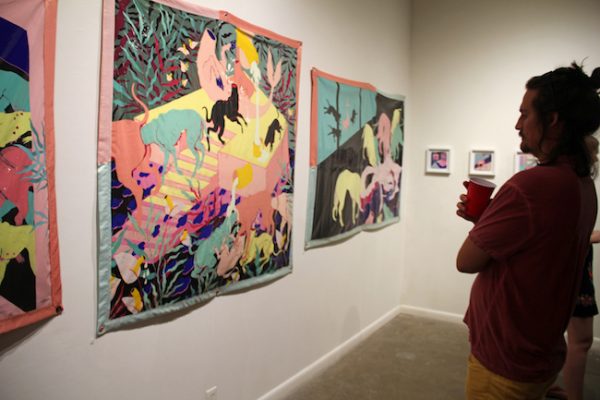 In the first of three Gardenscape paintings, a lone hippocamp bathes in a bubble bath while a pack of dogs swarms outside. The headless dogs claw and scratch in sometimes playful, sometimes twisted interactions. Compared to the leashed pets some Austinites bring to art openings, these dogs are not docile. It’s as if they’ve revolted against their servitude to man and ditched their heads to make impossible the bondage of leashes and collars. Losing their heads was the price for ultimate freedom, and now rid of owners, they consume relentlessly to fill their gaping holes. 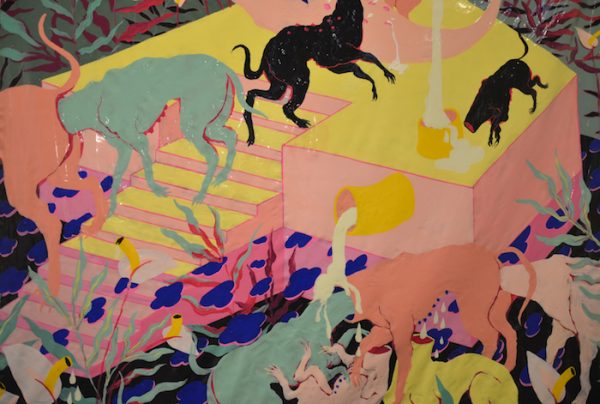 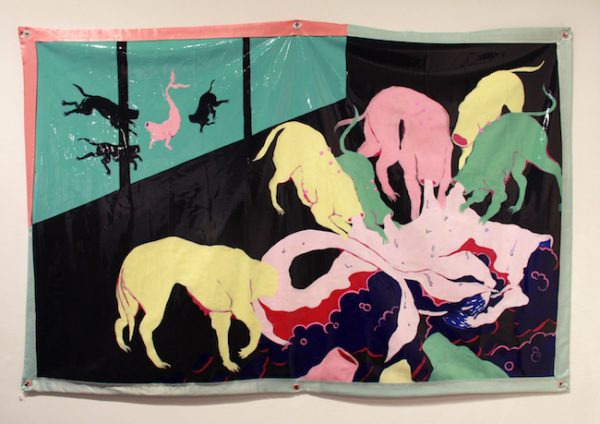 In the final painting, Gardenscape III, the dogs’ hunger moves beyond curious probing to become carnivorous. They pull apart a prized hippocamp and feast on its fleshy mass until the beast is beyond recognition. 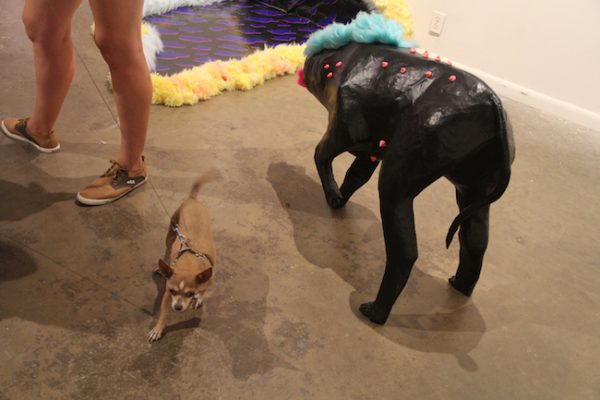 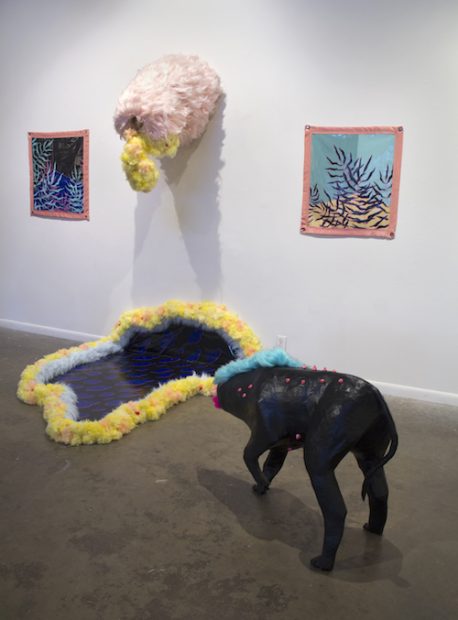 The artists continue to build this dogged world in sculptural adaptations. The paintings contain the meat and potatoes of their ideas and the sculptures feel supplemental. A headless life-size dog (a larger breed, though I couldn’t say which type) walks cautiously (his tail says so) toward a puddle to drink. He is hairless save for some back scruff spotted with pink candy nipples. 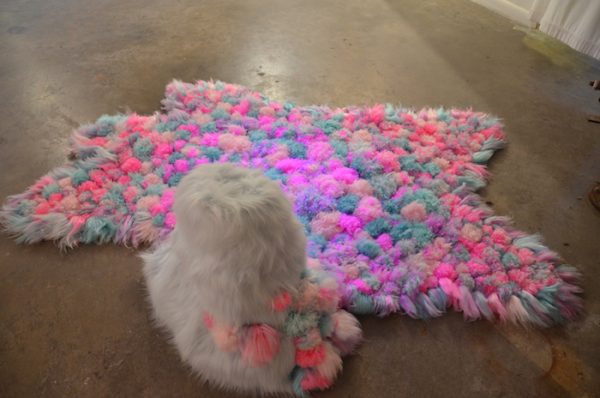 Two neon, glowing fur pelts, which seem to be made from hundreds of skinned children’s toys, are displayed in a shadowy corner of the gallery. The artists’ statement suggests the dogs voluntarily removed their pelts, as humans might remove their clothes. In the un-airconditioned gallery space in the middle of June in Texas, I can’t blame them.