Pump Project: The Latest Casualty of Austin’s East Side Boom 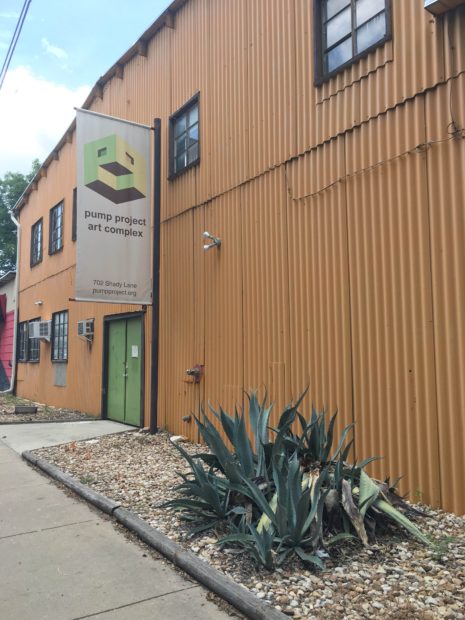 Pump Project Art Complex, a non-profit art space located in East Austin, has announced that they are planning to relocate on account of their lease not being renewed. The organization was founded in 2005 as Shady Tree Studios and has since grown to include a gallery space and two floors of studios housing more than 40 artists and craftspeople.

Problems began for Pump Project in December of 2015 when the organization received a visit from the City of Austin on account of code violations. Up until this point, Pump had not ever had a certificate of occupancy. Following the inspection, Pump began participating in talks with the city on how to bring their space up to code. They received help pro bono from the architecture firm Link Architecture who assisted with plans for renovating the space. Some of the fixes were simple: installing outward opening doors, exit signs, etc. Others, however, were not: the city was asking Pump to build two additional bathrooms into the building, which alone would cost the organization $50,000.

Pump Project didn’t want to begin these renovations in a building they could be kicked out of — since December 2015, their lease has been month-to-month. In hopes of keeping their current home, the organization reached out to their landlord with a letter of intent to continue their contract so the renovations could begin. Their landlord, however, decided not to renew Pump’s lease and has since told them that he plans to put the building on the market with an asking price of $2.4 million.

In the wake of this news, Joshua Green, Pump Project’s Executive Director, said that rather than waiting to see what became of the building, he wanted to move quickly to find the organization another home. While some of this cost can be covered by the money Pump was planning to spend on bringing their building up to code, the organization is also asking for donations to their relocation fund.

The move also means that Pump will lose out on a granting opportunity: while the organization received a $41,000 grant from the city’s Art Space Assistance Program designed to combat Austin’s ever-rising rent, in order to claim their grant, which would help bring their building up to code, the organization needs to have a 3+ year lease, which it currently does not.

Pump Project’s search for a new building is just the newest in a series of Austin arts and culture spaces that have been pushed out or drastically changed by rising rents. Co-Lab Projects has been searching for a permanent space for the past two years — their current pop-up gallery space on Congress Avenue is set to be demolished and replaced by luxury apartments. In 2016, the long-running Salvage Vanguard Theater lost its lease in East Austin after their landlord didn’t offer them an opportunity to renew.

The same thing happened to theatre troupe The Rude Mechs, who earlier this year were price out of their East Austin home of 18 years. So too was the fate of Art Post — after a management change, rent dramatically increased, causing an exodus of artists. When asked about the situation for a 2015 article, a representative of Art Post’s new owner said: “The intention was never not to rent to individual artists. But unfortunately economic realities mean that rents in East Austin are beyond what most artists can afford now.”

When talking to Glasstire about the state of East Austin, Pump Project’s Joshua Green expanded on this sentiment:

We’re losing every single place like this in Austin right now. Rent is increasing in smaller studio complexes across the city and it will only be so long before no artists will be able to afford the available spaces. Landlords don’t see much of a difference between the art community and designers or architects, so they’re fine with giving over their complexes to other groups who can afford to pay more. Pump Project is here to serve our community of artists by providing them affordable studio spaces and a place to show their work. If rents keep rising as they have been, we won’t be able to operate in this way.

Pump Project’s moving announcement was released yesterday, November 17, on their website and Facebook page in advance of the final weekend of the 2017 East Austin Studio Tour. Read the full statement below.

For over a decade, Pump Project Art Complex has been proud to call the bright yellow warehouse on Shady Lane home. This big, old building has been our place for community and creativity for 12 years.

Our plan was to raise money for the needed CODE improvements – but the landlord has now decided against renewing our lease.

While we are still seeking a way in which we might be able to stay in our iconic big bright yellow building, it’s a longshot, so we have decided to refocus our efforts on relocating.

Over the next few months, we will be looking for a new home – we are asking all those who support the artist community here in Austin to donate whatever you can to help Pump Project in this effort.

If you’d like to help us raise money in our fundraising efforts in your o wn network, please sign up with Better Unite through this link: https://www.betterunite.com/PumpProject-relocationfund

Dear artists, thanks for making the property valuable. Now get the fuck out!

With respect to organizations that occupied the same space for long-ish periods, I’d be curious to know what the rent they paid through the years adds up to. The numbers might not yield any simple, obvious solution, but still shed light.