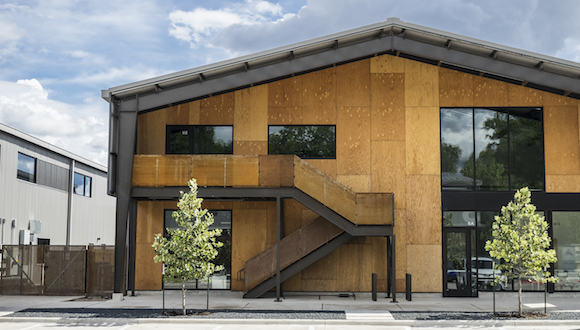 Small part of the sprawling Springdale General. Photo via springdalegeneral.com

In the past few years, Glasstire has written many posts about the growing lack of sustainable housing for art spaces and artist studios, such as “Austin Still Trying to Fix Affordability for Creative People Problem,” “City of Austin To Help Arts Orgs With Skyrocketing Rents,” and many more about the rapidity of gallery closings.

Although some have received grants from governmental entities, most of this new movement has been created through grassroots endeavors. Several of them, like the Splinter Group, a huge woodworking space in a converted warehouse on East Cesar Chavez Street, demonstrate the value of grassroots collaboration and innovation. Others, such as the gargantuan new 15-building complex (one of the 15 shown in the photo above) called Springdale General on Springdale Road, house non-arts charities and businesses along with arts groups.

When Mass Gallery had to close, it found a new, smaller space, but they have big, new plans. The cluster of industrial buildings known as Canopy hosted arts groups such as Blue Genie Art Industries and the Blue Theatre, along with Goodwill Industries now includes 45 small studios, three galleries, several creative offices and a coffee shop. It is also home to Big Medium, the arts group that generates the East Austin Studio Tour, West Austin Studio Tour and the Tito’s Art Prize. Also, Canopy has taken in more artists who had no home or who were scattered from lost complexes like the Pump Project.

“Being an artist is a pretty solitary thing,” says a tenant of one of these new, collaborative spaces. “So this space helps create community.”

As a founding member of ICOSA I am happy that our collective ended up at the Canopy complex. After we were displaced from the Pump Project space, due to the sale of the building, there were not a lot of options on the table for us. The opportunity to join the Canopy family was made possible by Shea Little and the Big Medium crew, who are doing a great job helping to grow the Austin Art Scene, while trying to preserving the community that has been displaced by the rapid development of the Eastside. Though new venues and spaces are important, they are just empty shells without the Artist to inhabit them, the community to rally around and support them, and of course the critics to write about them. Thank you Glasstire for continuing to cover this.