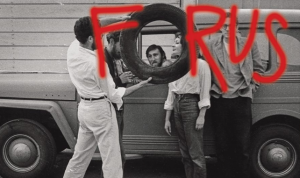 Forus Gallery, an apartment exhibition space run by artists Donnie Carver and Jade Abner opened in December 2011 on 51st St. in Austin. Their inaugural show, The Prettiest and the Pinkest featured “Lady Art” by Lucy Parker, Allie Underwood, and Chantal Wnuk and was followed by Nick Griffin’s Falling Apart and Into Place, Territory by artist Sarah Milbrath, and Endless Bummer featuring prints from artist Brooke Bamford. After the opening of White, Blue featuring Pam Jarvis in November 2012, the gallerists moved.

After a short hiatus, they’re at it again: their current place at 1502 W 34th St. Apartment #A, Austin, has been built out and they plan to restart their exhibition program with Tanned Guy Takes Blood Shot, opening April 26 (the weekend of the West Austin Studio Tour) with a reception from 7-10 p.m. The show features the work of Christopher Culver, Nate Ellefson, and Taylor Swan, who have painted the formerly white space black and installed an ecletic mix of towel sculptures and collaborative investigations into language. See you there!