There seems to be a proliferation of women in popular culture being gross. I point out the popularity of shows like Broad City, Inside Amy Schumer, and Girls, and the trend is important not only because women doing and saying disgusting things around bodies and sex can be really funny, but also because it’s a subversive and seriously effective feminist strategy. Through comedy, the grotesque demands some attention from all comers, but it also territorializes the issue of women and their body functions as something only women can be privy to. Men are relegated to outsider status as they laugh along on the sidelines. 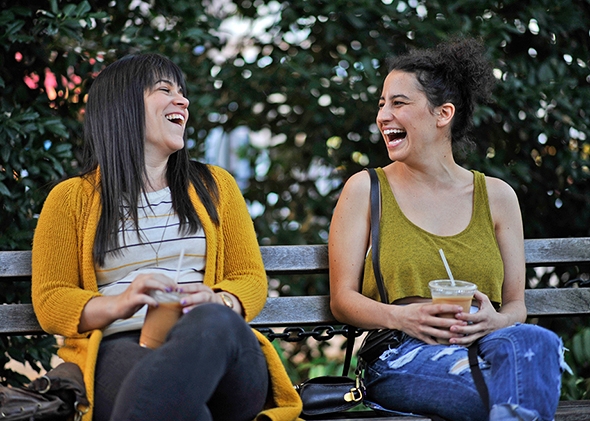 Abbi and Ilana from Broad City

This fascination creative women have with the grotesque extends to the visual arts, as I see it crop up again and again in exhibitions. But for visual artists, it often extends beyond wanting to be funny or assert feminist proclivities. More so, it speaks to a sincere exploration of what actually constitutes feminine beauty.

Many women artists today are working through ideas of beauty with the subtext that part of what makes a woman compelling, complicated, sexy, and real is not the flawless skin of a Neutrogena commercial but instead a complex entanglement of the sublime and the unseemly. Women artists are keenly aware that we are not plastic robots lacking orifices—we have periods and body hair; we get cellulite and we fart.

The artists in Houston’s Fresh Arts’ current exhibition Dimpled, Twisted, and Buried—Jade Abner, Iva Kinnaird, Evelyn Pustka, and Emily Whittemore—share this fascination with the female body. Using drawing, sculpture, painting, and photography, each artist explores the body as a subject by exploring the way it functions: the way it folds, twists, abuses itself, excretes. But what they also uniformly do is infuse their work with a certain degree of tenderness, enough to make what is gross feel poignant and inextricably linked to the parts that are beautiful. 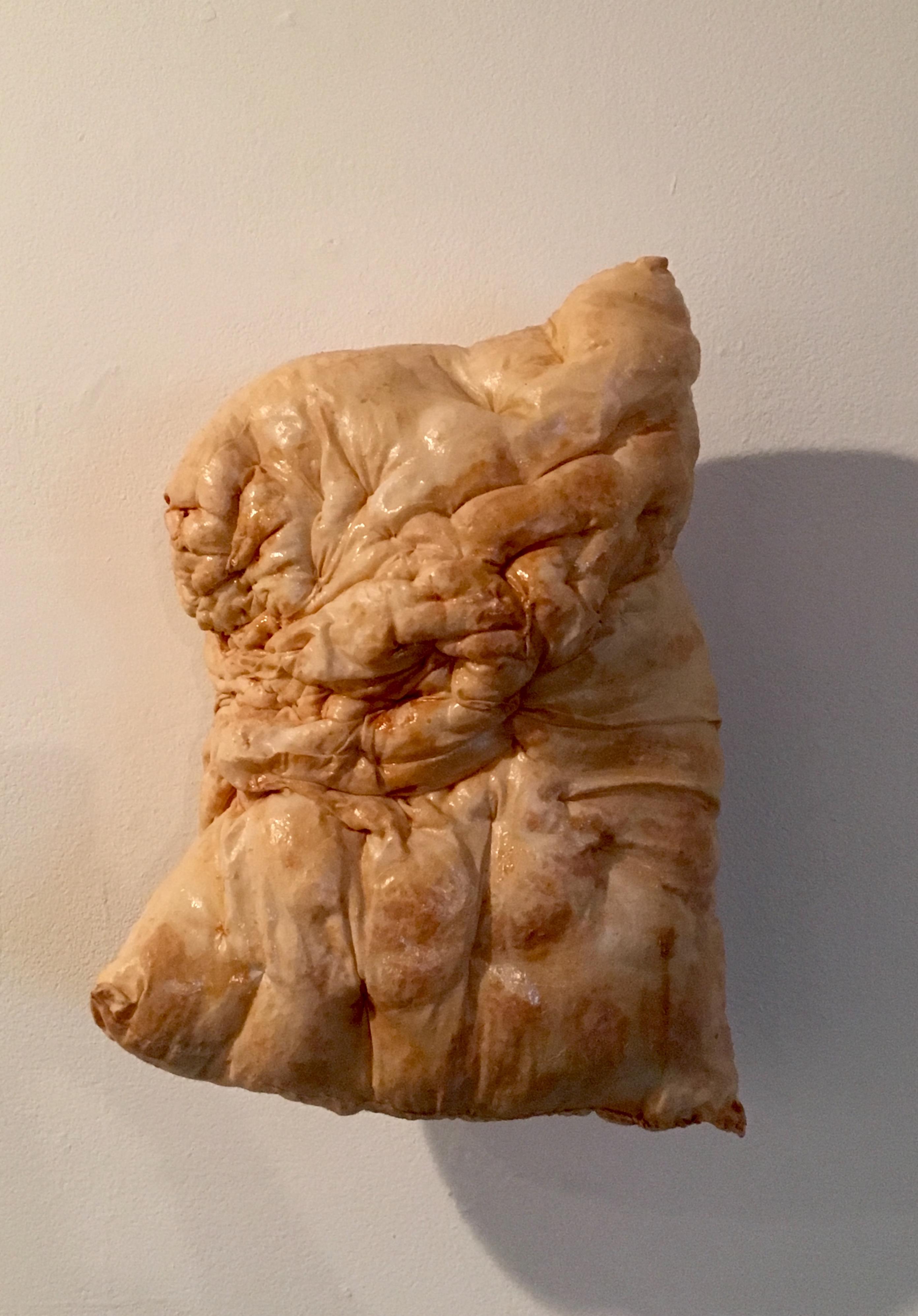 Most effectively in this delivery is Jade Abner, making sculptures either free-standing or attached to the wall that vaguely resemble organs extricated from the human body, yet mutated so that they feel as though they’re realizing a life of their own. Untitled (2016) builds upon itself like a pancake-stacking tentacle. Gleaming, pink, phallic and labial, it dares you to touch it while threatening to slime anyone who does. Cradle Potato (2012) emerges from the wall like a lumpy sack of fat. Hardened and shiny, it hangs pathetically; it feels both frumpy and resolute. You can immerse yourself in the beige subtleties that define and blemish the piece, and let your eyes wash over a work that feels both as alien as plastic as intimate as skin. 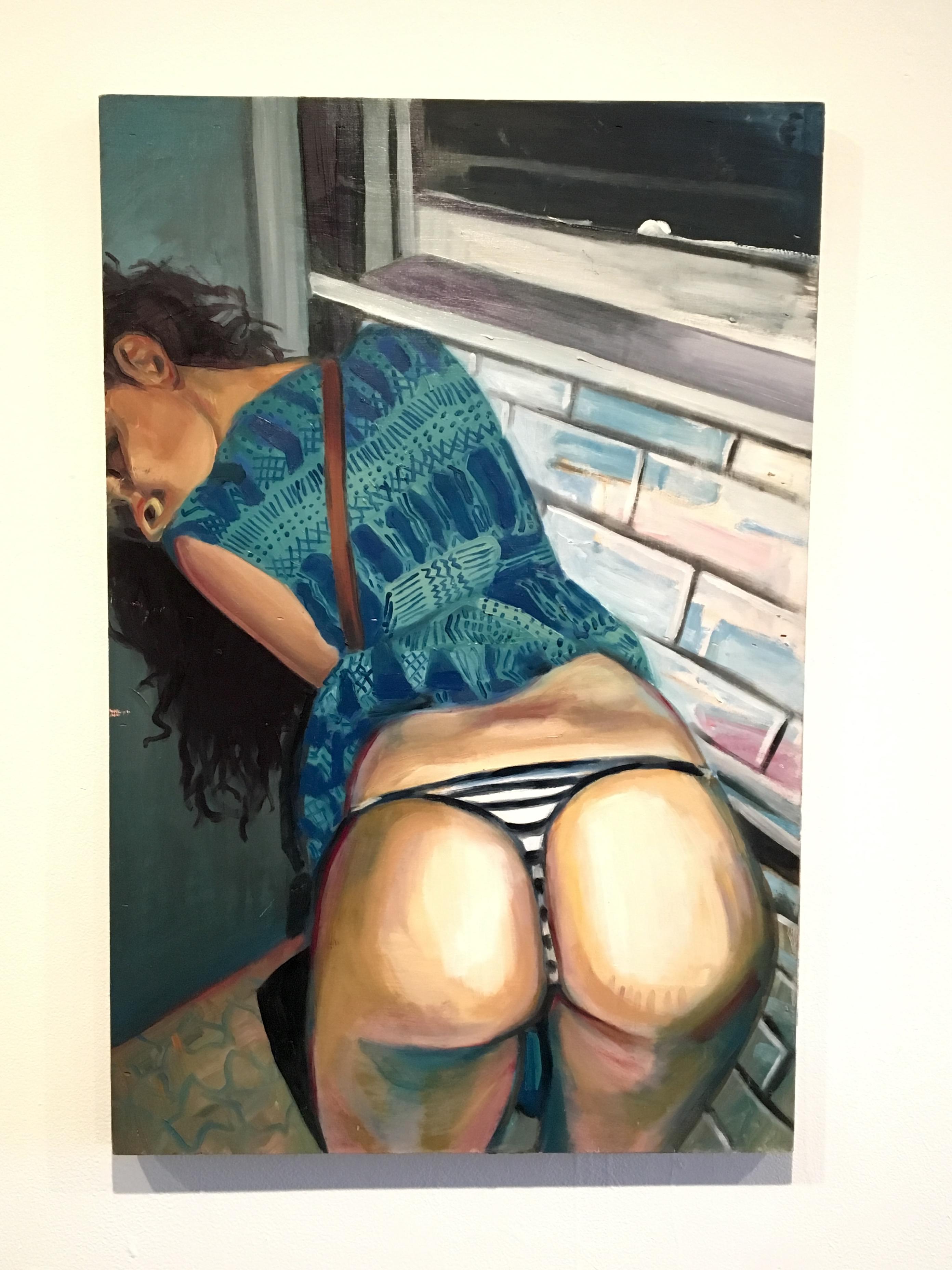 Being in one’s early twenties can feel a lot like the kindergarten of adulthood: it’s a myriad of drunken mishaps, jarring realizations and acceptances of failures, frustrations, and disappointments. It’s when one figures out how to be in a relationship with someone else and the world. Both Iva Kinnaird and Emily Whittemore tackle what it means to socialize, behave (or lose inhibition), love, and navigate through disappointment. Whittemore’s most effective painting, Classic (2014), depicts a young woman with her dress hiked up and her ass out, facing the viewer while bent as if hanging over a toilet. She looks back at us. This feels like a regrettable night captured on Instagram. In contrast to the subject, Whittemore’s thick brush strokes feel buttery and weirdly loving, and transform this image from cringe-worthy to unselfconscious, or celebratory, and more strangely honest. 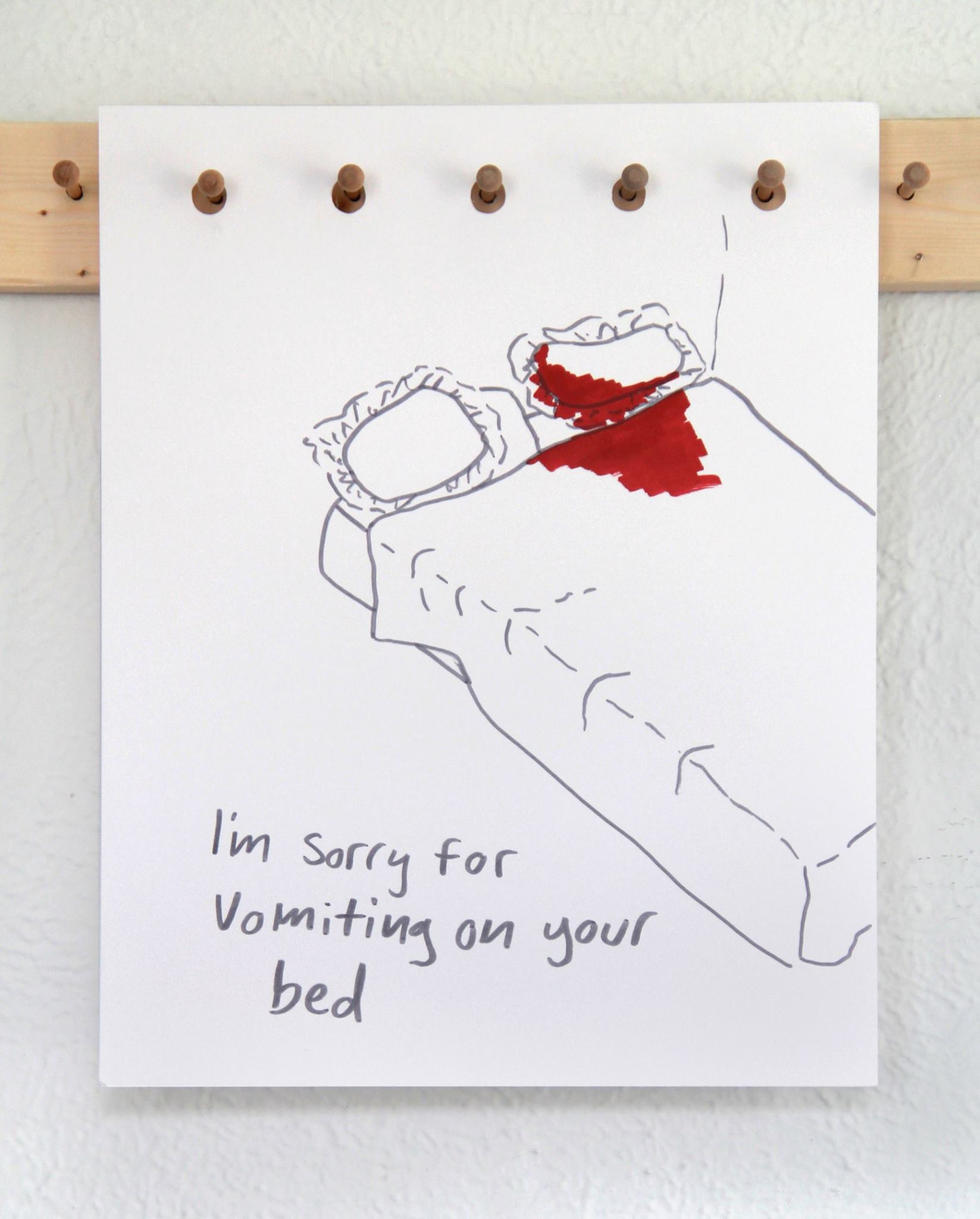 Similarly, Kinnaird’s Bad Drawings (2014-16) are demented and tender. From admiring a friend’s awkward smile to an apology card for urinating in a friend’s roommate’s bed to a funny epitaph, it’s clear Kinnaird is at her best when she uses absurdity to comment on being a woman and being young. (Even the unnecessary wooden pegs these works on paper are mounted upon convey some delirium.) We feel this less with Cement Doodles (2016), a drawing in cement hung by a pulley system, that reads more as absurd just for absurdity’s sake, while Bottle Opener (Things Four and Five) (2016), on the other hand, feels unsettlingly heartbreaking. A complex pulley system—all for opening a single beer bottle—leaves a lusciously violent ax dangling, a gratifying hole in the wall, and the thrust of the ax’s movement so strong that it nearly broke the wooden mount holding the Bud Light bottle. The bottle, while opened, was also shattered all over the ground. 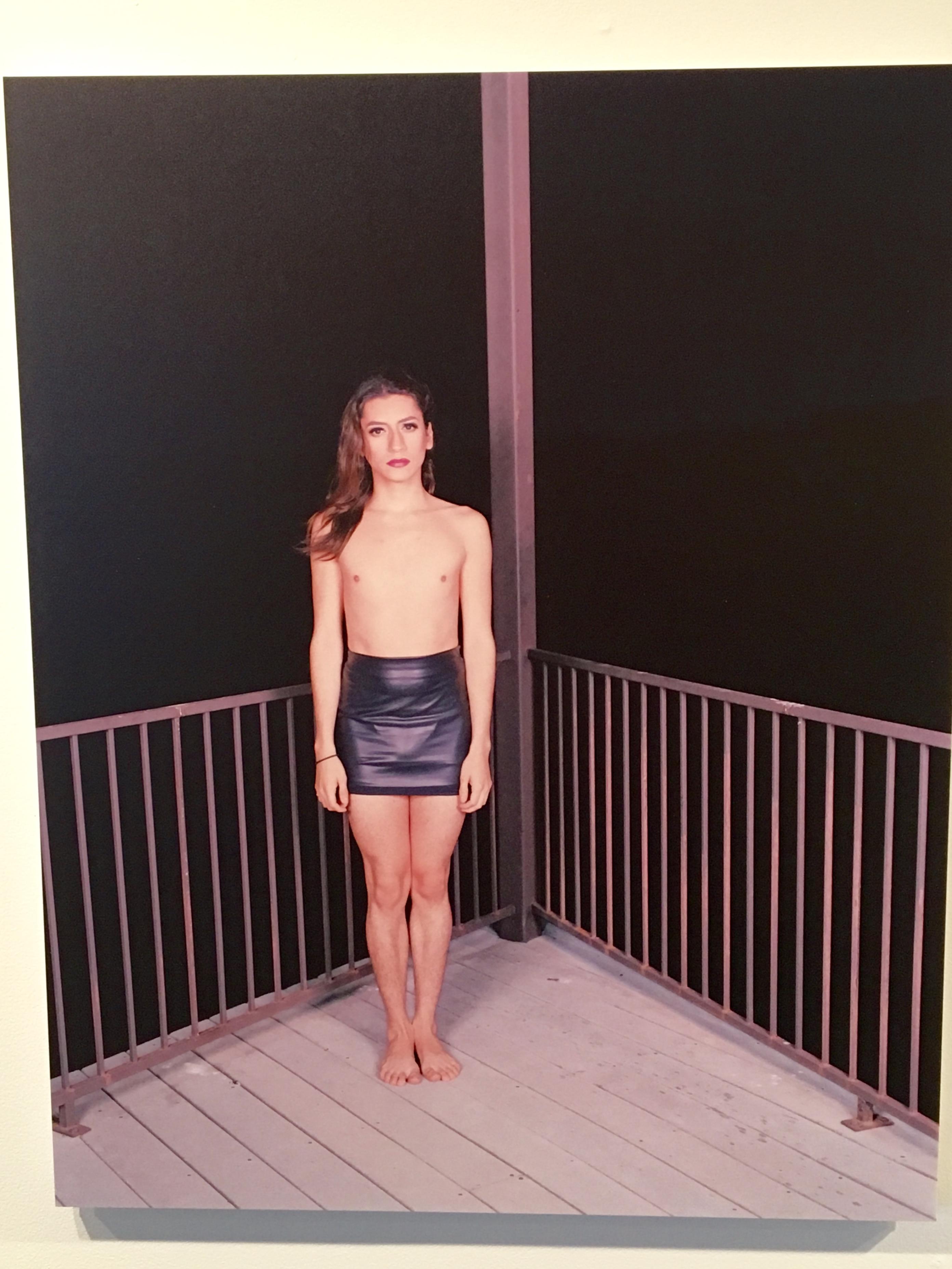 Evelyn Pustka here shows a number of her portraits of friends and a relative, as well as one self-portrait. The image most seared into my memory is her Androgyny by the Lake (2015). A photograph of a trans woman, the subject stands facing the camera, backed into the corner of a balcony. She stands shirtless, her flat chest barren and penis bulging through her tight leather skirt. Being beautiful, we might expect her to stare back confrontationally and assume she’ll emanate some fierce sort of pride—one thrust upon her by her own community. But instead she looks drained and sad. This woman is not feigning a character for the trans community; she’s presenting herself as a vulnerable human being.

Dimpled, Twisted, and Buried is on view at Fresh Arts (Houston) through March 4, 2016.

Houston Artists in an Archive