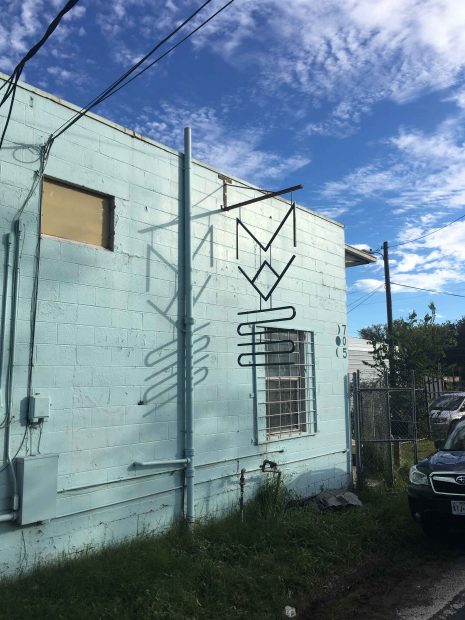 On October 26, 2018, Austin’s MASS Gallery, an artist-run exhibition space and collective founded in 2006, will reopen with a group exhibition featuring ten Austin artists. In July of this year, the gallery and collective closed up its old space, which was located at 507 Calles Street in a mixed-use building, with Regional Fictions, a show of works by Houston-based artists Jamal Cyrus and Julia Barbosa Landois. Since then, though MASS hasn’t had a physical presence, it still hosted its annual Hotbox Residency show with the help of St. Edward’s University. This sixth iteration of the residency featured artist Rachael Henson, who used the university’s gallery as a studio for a month, from mid-July to mid-August.

MASS’ new gallery is housed in a space that used to be the home of Moon Collective, a ceramics studio. Located at 705 Gunter St, just a stone’s throw from both MASS’ old location and the Canopy complex, which is home to the ICOSA Collective and Big Medium, the new gallery is comprised of a rectangular room with an attached studio space that MASS plans to rent out to an Austin artist.

Although visitors will note that MASS’ new building is considerably smaller than its previous one, with an 800-square-foot gallery as opposed to its previous 1500 square feet, the collective has signed on to a five-year lease, hoping that the new building will provide them a sort of temporary haven from the ever-increasing rent prices of East Austin. Additionally, the space features a large yard, which the gallery plans to utilize for future programming.

For the past few months MASS’ members have been fixing up the new building, framing and finishing out the space to turn it into a white cube. The gallery’s opening exhibition is the third installment of its Staycation series of group shows featuring Austin-based artists. This edition is a group exhibition featuring ten Austin artists, including Sunday Ballew, Emily Cross, Bug Davidson, Levi Dugat and Simone Thornton, Andrew Hulett, Marisa LaGuardia, Alicia Link, Betelhem Makonnen, and Stephanie Concepcion Ramirez.

Staycation: thresholds opens on October 26 from 7-10PM. It will be on view through December 8. Learn more about the show in this week’s Glasstire Top Five video.