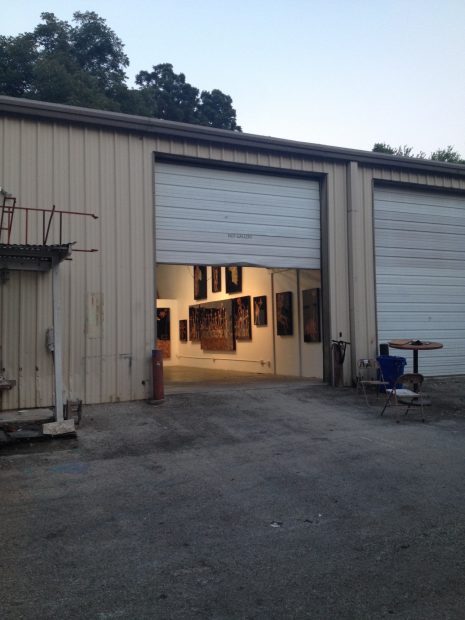 Not Gallery, an artist-run space in Austin, announced recently that its current exhibition, Monopines, will be its last. Founded in 2014 by Alex Diamond, the space occupied one bay in the multi-use building on Bolm Rd. that also was the original home of Austin non-profit Big Medium. While the gallery started out as shared studios, it quickly turned into an exhibition space for artists that Diamond wasn’t seeing shows from, both locally and nationally. Over its four-year run, Not Gallery has hosted shows primarily featuring Austin-connected artists, including Xavier Schipani in 2014; Ryan Thayer Davis, Manik Raj Nakra, and Sky Murray (formerly known as Melissa Murray) in 2015; Cameron Coffman in 2016; and Perrin Turner in 2017, among others. Over this time, the gallery did offer some studio spaces for artists, and also served as a hub for Austin’s art community, participating regularly in the annual East Austin Studio Tour.

One of the main reasons Not Gallery is shutting its doors now is because of rent increases. The gallery’s lease ends in June and if Diamond wanted to keep the space, he would have to deal with a 50% hike in rent. Up until this point, the yearly rent increases had been more gradual. This makes Not Gallery another victim to Austin’s Eastside boom: just in the last year, Pump Project’s building has been put on the market for $2.4 million, Flatbed Press learned that it will lose its lease in 2019, and ICOSA Collective, by way of being in the same building as Pump, plans to relocate to the Canopy complex. Other Austin organizations that have faced displacement include the Salvage Vanguard Theater, which lost its lease in 2016, and the theatre troupe The Rude Mechs, which was priced out of its East Austin home of 18 years.

Additionally, Big Medium has given up its lease on four bays in the same building as Not Gallery. The non-profit has operated these spaces for the past 14 years (two of them for 16 years), leasing them out as artists’ studios and gallery spaces. Their lease ended on April 30th, which coincided with the closing of ATM Gallery/Studio, an artist-run space that occupied Big Medium’s old gallery in the building. Three of these four spaces have been handed over to other members of the Austin art community, meaning that their mission of being a place for Austin artists will likely continue for now.

yeah, rent increases suck, thanks GT for writing on this, thats just the way it is, some things will never change, i think is how the song goes, if you are old as dirt like me anyway 🙂