Hopi Visions: Journey of the Human Spirit at the DMA

Michael Kabotie and Delbridge Honanie, Journey of the Human Spirit – The Emergence (Panel 1), 2001, acrylic on canvas, Courtesy of the Museum of Northern Arizona, © Gene Balzer

The 2001 mural Journey of the Human Spirit by Hopi artists Michael Kabotie (Lomawywesa) and Delbridge Honanie (Coochsiwukioma) begins with the mythic emergence of a people into a new world. Their faces in profile are hued in blocks of red, yellow, blue, and green, colors echoed in overhead symbols for rain and thunder, and nearby plants and animals, like flitting butterflies and a soaring bird. Following them, almost hidden by some foliage, is a figure whose face is a negative of the others, its color saturated to gray. The human tendency to corruption and dysfunction represented by this shadow haunts the panels of the 48-foot-long mural, which chronicles Hopi history from their ancient roots and bloody confrontation with Spanish colonists, to the strip mining of Black Mesa and a rebirth in the digital age.

Michael Kabotie and Delbridge Honanie, Journey of the Human Spirit, 2001, acrylic on canvas, Courtesy of the Museum of Northern Arizona, © Gene Balzer

For the first time, this six-panel mural is being exhibited outside of its permanent home in the Kiva Gallery at the Museum of Northern Arizona in Flagstaff. Hopi Visions: Journey of the Human Spirit, on view at the Dallas Museum of Art through December 2, complements it with objects from the DMA collections, such as 12th- and 13th-century black-and-white ceramic vessels decorated with turkeys and corn kernels, 20th-century kachinas, and 14th- and 15th-century polychrome bowls painted with flowers and hummingbirds. While the vibrant hues and abstracted forms of Journey of the Human Spirit were based on Kabotie and Honanie’s research into Ancestral Pueblo wall paintings, the monumental work was intended as a universal story of the human experience (as evidenced by its title, which is not “Journey of the Hopi Spirit”). Its chronicle of the land’s pollution by industry, and the modern of plagues of drug abuse, alcoholism, and obesity, are issues that extend far beyond the Arizona reservations. As is its quest for hope and cultural resurgence. For instance, in a panel on life after the ousting of the Spanish colonists in the Pueblo Revolt of 1680, a Hopi kachina is joined by a Buddha, its presence offering another reference for release through suffering, and finding a place of center.

In these mash-ups the mural speaks to Hopi and non-Hopi audiences. In the 1970s, Kabotie and Honanie were founding members of Artist Hopid, a collective which pushed beyond the pervasive themes of animals and reservation life in indigenous contemporary art to examine deeper social and political issues, while still engaging with Hopi traditions and values. Kabotie once collaborated with Jean-Jacques Dauben on a Hopi/Celtic Connections painting series that drew on serpent imagery from both cultures, and was inspired by the overlay silversmithing of his father Fred Kabotie, who created modern jewelry with Hopi pottery designs. Honanie brought a contemporary flair to his painted kachina sculptures, and depicted everyday life in his carvings.

Michael Kabotie and Delbridge Honanie, Journey of the 14. Human Spirit – Rational Side: The Dysfunction (Panel 5), 2001, Acrylic on canvas, Courtesy of the Museum of
Northern Arizona © Gene Balzer

Kabotie died in 2009, and Honanie passed away in April of 2017. An illuminating video tour by Ed Kabotie, Michael’s son, is available on one wall, taking viewers through the visuals of each panel. The flat perspective of the mural, and the rigid lines of its images, can make it appear deceptively simple. Its complexity is revealed through longer examination. An archaeological map acts as a symbol of ancient migration, and the deliberate use of various colors of corn, such as the blue ear within a baby in a woman’s womb, connects to the Hopi’s long history of maize cultivation. Threading through each of the nearly five-foot-tall panels is a constant search for balance between light and shadow. By a Catholic Church built on a Hopi sacred site, a missionary is stabbed; each figure in this scene representing the Pueblo Revolt of 1680 has a ashen gray face. Later this sapping of color returns when mining turns the turquoise aquifer water into gray sludge in the coal-slurry pipeline, with adjacent petroglyphs marking this as a disrupted sacred site. Three figures tumble over the opening of this toxic flow: one pierced by a syringe fires a bullet through its head, another pours alcohol into its diseased body, and a third who has lost its legs to diabetes still wields a fast-food hamburger.

In a final panel, a Mesoamerican feathered serpent arrives to guide a brother and sister into the underworld where they can rediscover truths; religious symbols from Christianity, Islam, Judaism, Hinduism, and Shintoism all hover over a computer representing interconnection in the 21st century. The material in Journey of the Spirit is often dark, yet the artists give its story a buoyant tone, and even some sly humor. A gallery guide reveals the wry play with modern technology in this last prophetic vision:

“The computer is sitting on top of the Pyramid of the Serpent from Teotichuan. And then, there is our favorite pun that we placed inside the computer — the apple. The apple was the tool of the downfall of the twins in the Old Testament — Adam and Eve — and in our story the Apple computer will restore them to the truth.” 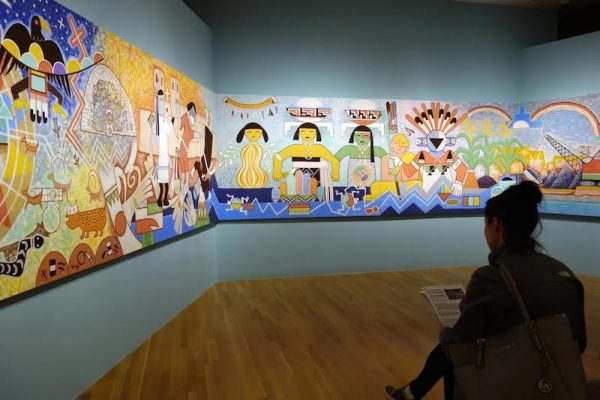 At the Museum of Northern Arizona, the mural is installed on three walls of a replica kiva so visitors experience its narrative in a highly contextual space (a kiva is illustrated on the first panel, echoing the idea of emergence from the underground). In Dallas, the panels are angled on three walls to give a sense of closed space, but it isn’t the same kind of immersion. Yet there are meaningful echoes from the museum objects, like a large 1920-30 Palhik Mana (Water-Sipping Maiden) kachina whose radiant headdress includes symbols of clouds and lightning similar to those on the mural. At a time when many institutions still divide their indigenous art from the American art and contemporary galleries, and treat its objects as something static in time, it’s important to show how this traditional art reverberates into the present.

Although it is a Hopi gaze that guides the mural, the commonalities of its story invite visitors to consider the corruptions of our past, and pathways to the future. In light of the recent protests against the Dakota Access Pipeline, and the proposed reduction by the Trump administration of Bears Ears National Monument in Utah where ancient petroglyphs could be put at risk through mining and development, having Kabotie and Honanie’s Journey of the Spirit travel to new audiences is significant in encouraging this dialogue. As the artists stated after the mural’s completion: “In the end, we are left where the mural ends, with our own imaging of new paths through present darkness toward a light in this place.”

On view at the Dallas Museum of Art through December 2.

Damn, I wish I didn’t hate driving to Dallas, because I would definitely love to go see this show.