Founded in 2011, The HOMECOMING! Committee is a collective made up of a dozen artists centered in Fort Worth. Members range from mid-career to just finishing their B.F.A.s. Its working methods and hierarchy of leadership are somewhat mysterious, to say the least.

The projects and installations that have come out of the Committee’s few short years of existence have already made a major splash on the Metroplex art scene, and have been shown at both the Dallas Museum of Art and the 2013 Texas Biennial. Now, one of the most interesting and progressive groups from Fort Worth is showing at one of the city’s most forwarding-looking gallery spaces: and x. The hot tub was just a huge bonus! 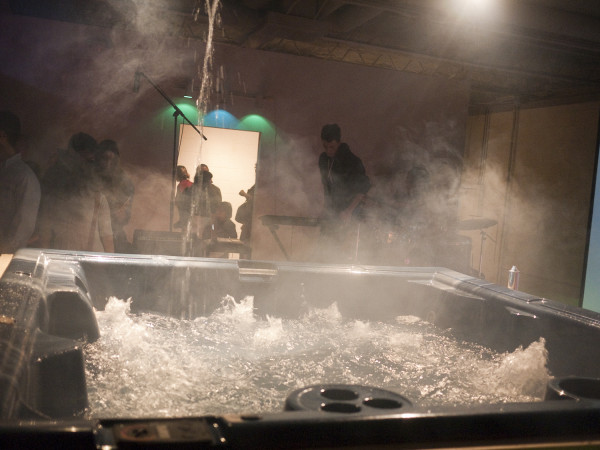 The hot tub installed in the gallery for the opening night of MacGuffin was just the beginning. Along with live music, the group set up a flume that carried ramen noodles down a trough. Gallery-goers lined up to pluck noodles out of the flume with chopsticks and dunk them into pre-prepared bowls of broth, green onions and ginger. This event is based on a tradition in Japan that two of the members experienced during a trip there in the summer of 2012. 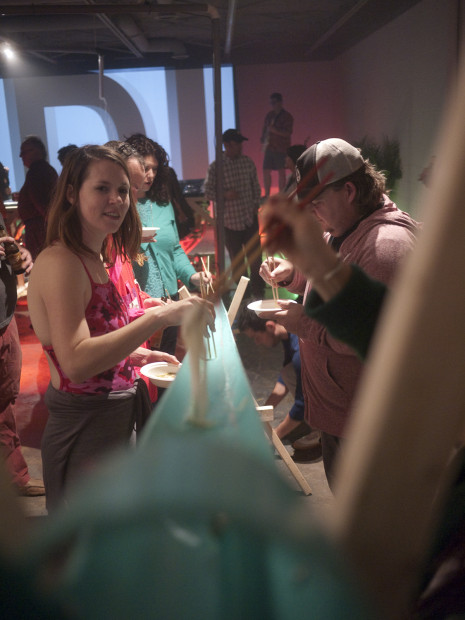 HOMECOMING! defines the term “MacGuffin” on their website as “an object, event, or character in a fictional story that serves to set and keep the plot in motion despite usually lacking intrinsic importance.” The entire premise of MacGuffin is that the exhibition will change over the course of the next two and a half months. The hot tub may later be cut in half or even completely taken apart, a strategy reminiscent of Launch Party, one of HOMECOMING’s first big projects in 2011. The group asked everyone to bring an object to the opening, which the group used to construct a spacecraft, the XLP-11, behind a curtain during the course of the evening. The curtain dropped at midnight, revealing an impressive looking assemblage bearing some resemblance to a spaceship. 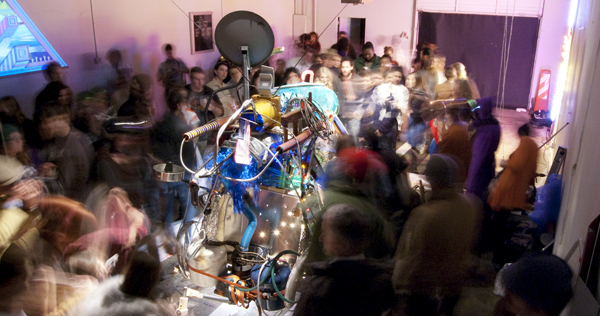 In the end, the ship was compressed into a cube like an old car. No object or installation is above being altered after the fact with this group. The boxes they made out of old Ikea furniture for CentralTrak’s part of the Texas Biennial were sent to Sweden to be burned as fuel. I understand the significance of this action as being a comment on how much better Sweden handles trash than The United States. Yet, this intellectual holocaust is hard to watch. I only pray that, whatever happens to the objects from this exhibition, they will not share a similar fate.

This “fluid installation” concept provokes serious questions about the ideas of the true permanence or worth of art objects. This is a favorite theme investigated by HOMECOMING! The MacGuffin show extends some of these questions to a dangerous length. Yet, the show is a testament to the huge amount of progress in the last three years. Each stroke of inquiry for HOMECOMING! improves on the last. 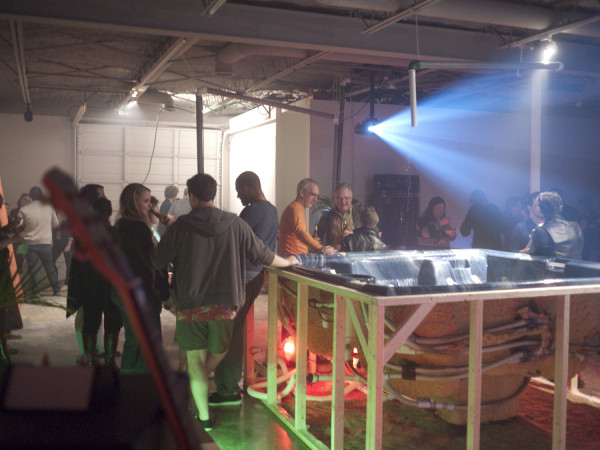 The MacGuffin will be on display in some form at and x in Fort Worth through January 18th.