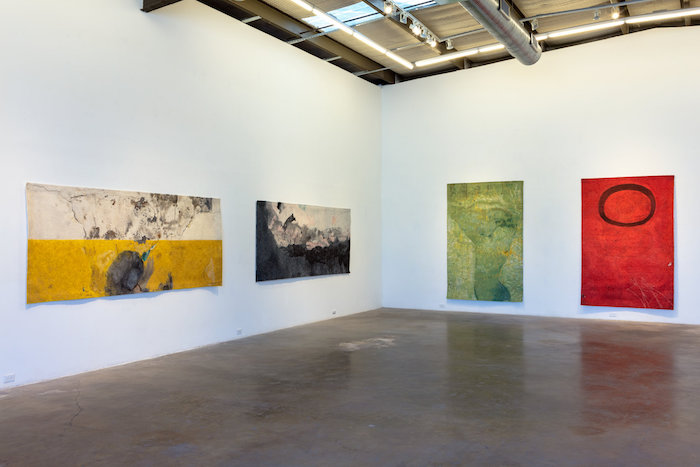 Art critics maybe shouldn’t go around making claims like “Textiles really aren’t my thing,” but in contemporary art, textiles really aren’t my thing. This is terribly reductive, I realize, and of course there are exceptions. One recent example: I was crazy about Melissa Cody’s 2017 show of reimagined Navajo weavings at Houston Center for Contemporary Craft. And also, right now I’m very into Gary Goldberg’s show of big felted-wool tapestries at Erin Cluely Gallery in Dallas.

Goldberg, who’s based in Wichita Falls, is really a photographer — both in the art world and journalism — and in recent years he’s been spending time in Oaxaca taking photos of architectural details in the region. Three years ago he got started on a photographic series he calls Finding the Universe in Oaxaca (also the title of the current tapestry show), and it’s a perfect name for it, because the natural abstractions that appear in Goldberg’s photos — by him zooming in on details of curved walls, fading and crumbing plaster, and the play of light along such scenes— already read like epic celestial or otherworldly landscapes. 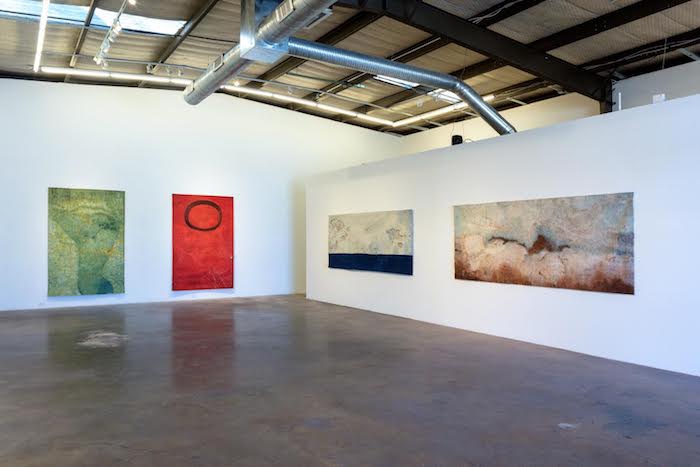 Along the way, he was introduced to the Taller de Afelpado team at their workshop in Centro de las Artes de San Agustin, in Oaxaca. It’s a small group of highly skilled artisans who specialize in making gorgeous felted-wool textiles using traditional methods and all-natural dyes. Goldberg, understandably, wanted to work with them. (He’s not the first artist to do so.) He isolated certain moments in his photographs for the artisans to recreate —to writ large, as it were — in wool, and the collaboration results in these tapestries, each of which really do seem to encompass a whole vibrating universe. 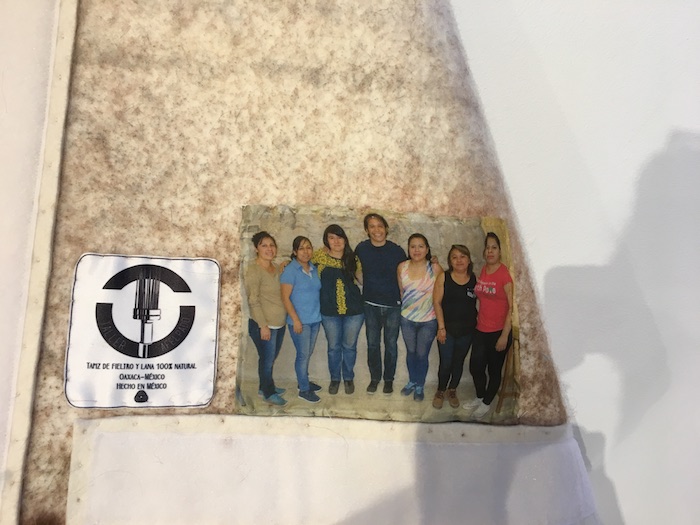 For the record, Goldberg’s acknowledgement of his collaboration with Taller de Afelpado is made explicit not only in the literature and statements about the work, but the workshop’s name and a group photograph of the artisans is mounted to the back of each piece — the piece’s signature, if you will. I’d like to think that this show is a beautiful and current example of a careful and respectful (and long-term) collaboration between artist and artisan. And in this political moment, when people are justly worried about the careless co-opting of other cultures’ traditions, I feel like Goldberg has fully celebrated his collaborators’ crucial role in the birth of these objects. 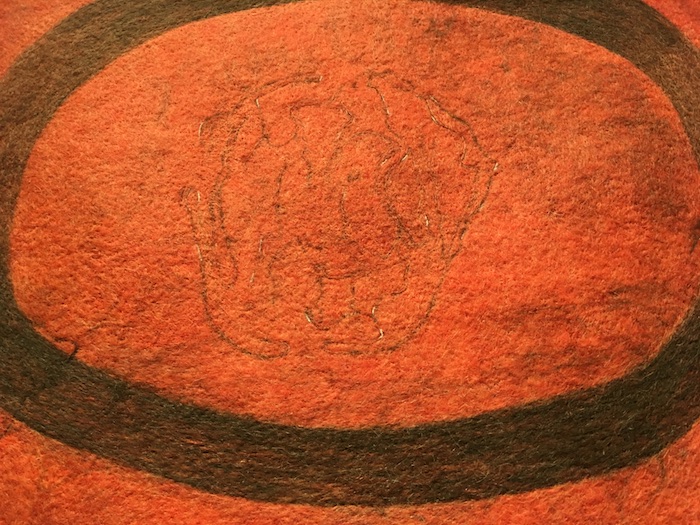 A bit of this series was featured most recently in the Texas Biennial in Austin, curated by Leslie Moody Castro, and there, in the crush of the opening crowd I nearly overlooked them. I think I needed to walk into a whole room full of them, as in at Cluley’s space, to get their quiet impact, but people more attuned to to the seduction of great textile work (as evidently Castro is) need no such immersive experience to appreciate them. 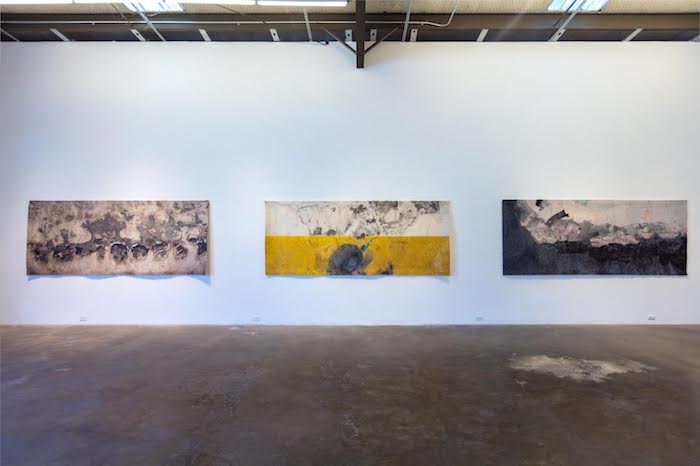 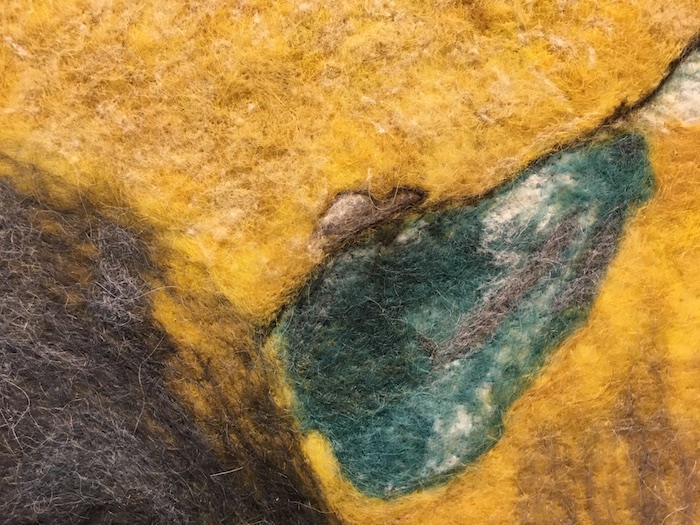 But as a big group installation of sorts, the tapestries really come together to sing, although now if I had only one on a wall of my own house I’d see it clearly for how satisfying and lush it is. The texture, the smell and heft of the wool, the impossibly soft and humming colors and the way these colors and textures dive into each other and undulate and flow… sigh. They infiltrate your perception and senses because they’re nearly as sculptural (and aromatic) as they are two-dimensional recreations of something Goldberg’s camera lens has captured. They envelop. The very idea that these expansive things, with such presence, are dense and bountiful distillations of photographs, created with centuries of expertise behind them, is very cool, and I think quite novel. You needn’t know about the photographic source to enjoy them, though. There’s no sense of a gimmick, or “ah ha!” party-trick happening here. In each tapestry there’s expert art and there’s expert craft — all rolled into one big rumbly, woolly surface.

Christeena,
Thank you for a beautifully seductive critique of Gary Goldberg’s work. Your words felt like I was experiencing it live.

Those Goldberg works are compelling objects, but I find it highly problematic that he’s employing nameless / faceless “partners” (aka barely compensated Mexican women) to make “his” artwork. I know artists throughout time have employed assistants or outsourced manufacturing, but there’s something here that seems especially exploitative. I’ve got to admit, I’d buy one if the makers were credited alongside Goldberg or if he had learned the felting process himself – it is after all, not that difficult – it just requires time.