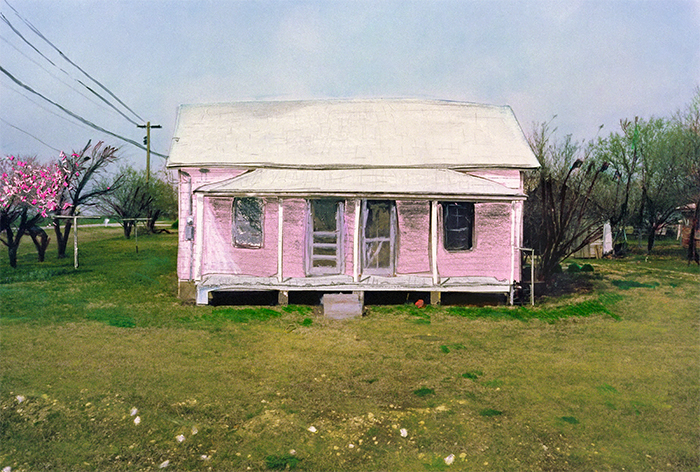 Objects tend to reveal more than they conceal. They flare with disclosure in ways that can feel unnerving, especially if we’ve already succumbed to the seduction of a world that invites us to co-create things as viewers. This is elementary epistemological material, but it makes it obvious that art ratchets this process up several notches because it’s a combustible combination of wonder and witness. The oddly luxurious process of merely looking is one of the most tantalizing of human activities, and the current show at Erin Cluley Gallery gives us plenty of fodder for both speculation and delight.

Voyeur of the Mundane is a group show of names that are the equivalent of Dallas royalty when it comes to art lineage. It delivers up a mystical sensibility cloaked in the guise of the ordinary. Nic Nicosia’s image, Pink house (1980), has operated almost as a logo for the exhibition, with a surprising allure that serves as a template for understanding the show. A better way of putting it may be to simply say “enjoying” the show. Since we live in a bling-saturated culture, it’s now a novelty to see modest things that spill their content so chastely — that demand that we coax them into their fullness. Nicosia’s house and other images, such as his Rickety fence (1980), opens for us the confines of a world we are called upon to imagine. And we know so much about the pink house’s innards without being able to glimpse its worn upholstery — or perhaps its lampshades bumped and tilted askew. It may also contain an armchair still sporting its original protective shield of plastic. It’s an enigmatic world sans Sub Zeros and swank gear. It’s the everyday mysterium that circulates throughout Nicosia’s body of work, and throughout the entire show, that is so elegantly tacit that it manages to convert us into eager voyeurs. But also here, we too become like artists in this chance to explore the act of looking as a creative feat. 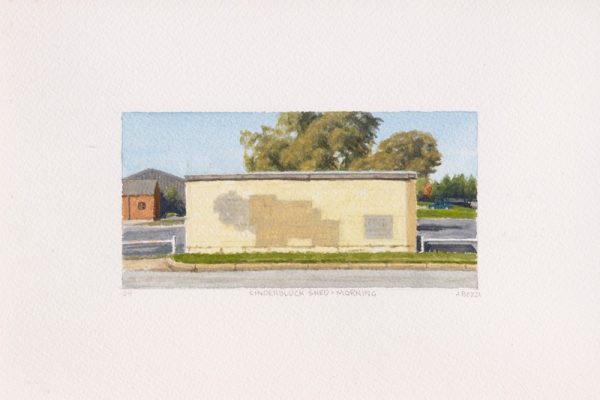 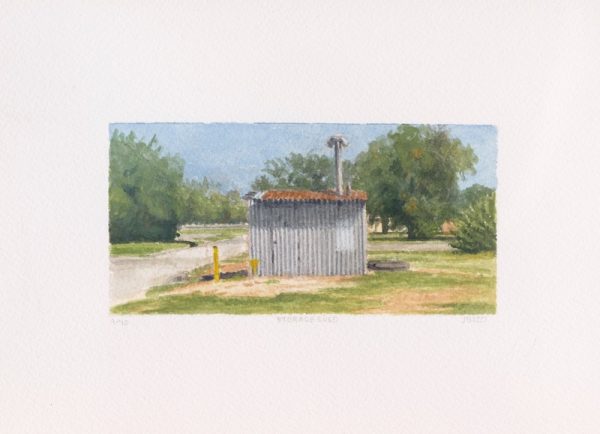 Julie Bozzi, Vernon Fisher, Allison V. Smith and Steve Dennie (the curator of the show and a fellow artist) – as well as the aforementioned Nicosia – all contribute to this good-natured navigation through Americana. It’s not snide, and it’s not delivered to us from an haute perch that saddens us because of some hideous state of eco-despair. Instead, it’s oddly revelatory because it delivers a kind of pure tenderness. Bozzi makes this point with spectacular deftness. She points out that she paints within the confines of her car because it keeps “unwanted onlookers” out of her artist’s cockpit. “You know in the old days artists were carried to their locations by you know… .” She motions to her shoulders. And I say, “Oh, I get it. Like the Tarzan movies where the hunters are carried into the jungle.” Bozzi nods and smiles. “Exactly.” Thus, an approach to artistic solitude is born. And it works, because Bozzi delivers gouache jewels, precisely rendered — images of zones of fences, turf, rooftops and manmade structures. And her images somehow raise existential questions that make us shift in our chairs and ponder the secular character of suburbia — or its transcendence. Her remarkably diminutive work delivers an equally remarkably broad ambit that tricks you into remembering that the truth of things is never simple. Cinderblock Shed, – Morning, and Storage Shed are only two cases in point. However, Bozzi gives us ample more places to explore that remind us that cropped landscapes can operate as fascinating visual code. 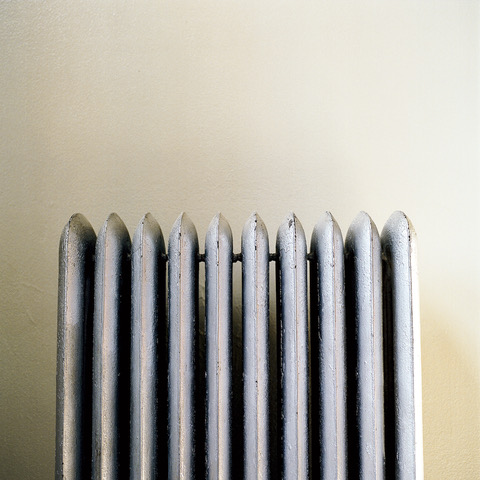 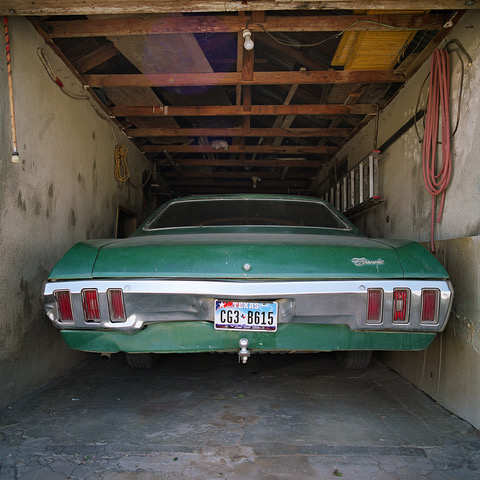 Allison V. Smith has also created a cache of images that explore simple symmetry and geometry in ways that remind us that the warp and woof of Being is disclosed in simple quotidian objects. In her capable hands, things as straightforward as radiators (Radiator. Arts Magnet. 2006. Dallas, Texas), car trunks (Parked. 2013. Marfa, Texas), and bookshelves (Bookshelf. H. S. Thompson Elementary School, 2012) become dense with optical luxury. Smith’s work converts us into voyeurs and we’re forced to recognize that objects are never fixed, even by our gaze; they remain utterly molten. Not to mention more than a tad seductive. 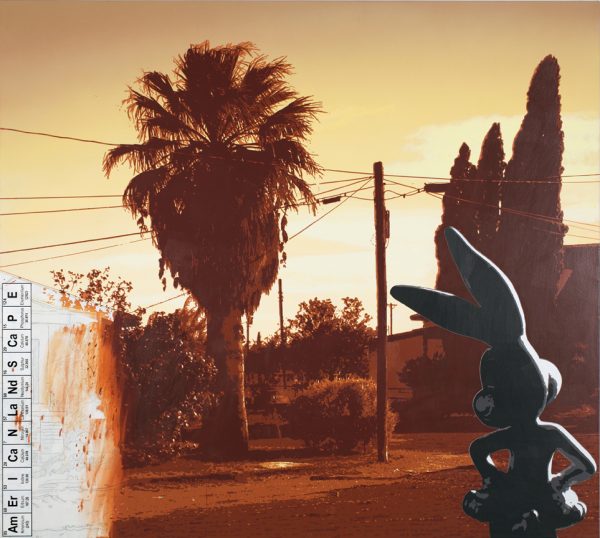 Of course Vernon Fisher’s presence in a show elevates its stature and it becomes an “occasion.” Fisher, of course, has enjoyed recognition via a Guggenheim as well as shows at MoMA in New York, the Whitney Biennial, and a lavish celebration of his work at Fort Worth’s Modern Art Museum under the aegis of former chief curator Michael Auping. As many readers no doubt already know, Fisher is known for incorporating bits of pop culture and verbiage into his work. The former is accomplished in American Landscape (2018) and the latter is evident in an earlier work featured in the show, Andy’s Apartment (1976). The landscape scene shows us a chubby palm tree, elongated bunny ears and equally elongated evergreen trees — and a telephone pole strung with wires that traverse the canvas. On the left side, they exit the image above bits of a periodic table that are yet another hallmark of Fisher’s work. What does it mean? The onus of figuring that out falls squarely on our shoulders. It might suggest that all of culture, pop and otherwise, is reducible to chemical components. Or it may just as easily operate as a form of play deployed for contrast that makes us mentally scurry to make synapses fire, thereby making odd connections. Fisher is a painter who operates well as a kind of Hermes figure; he travels between worlds and, ultimately, could be regarded as a bit of a trickster. He tricks us into seeing things differently. 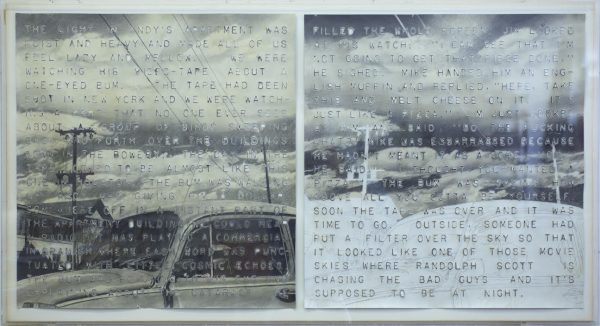 Meanwhile, Fisher’s Andy’s Apartment delivers a truncated story that vaguely corresponds to a photorealistic painting that completely merges with text. This suggests that there is never an interior narrative that fails to alter and interpret each and every exterior we encounter. Humans are makers of meaning. Artists certainly are, and I suspect that Fisher would agree that viewers are as well. Everything we see, everything we wish to touch, helps us understand the craft of making and of looking — but only if we heed what we learn from Fisher and the other artists in Voyeurs of the Mundane.

I was told that the name for the exhibition was an ongoing joke of sorts among artists in the show. Fisher, Bozzi and Dennie meet often for breakfast and the phrase was often mentioned. It is an apt description of an artistic sensibility. Proust had his madeleines, Vermeer had his fulsome women laden with fabric and pitchers. And now we all have everything that was, is, and anything that can be digitized, Googled or imagined. Thus, the world is more sumptuous than ever, especially if we don’t fail to pay closer attention to the small things, the mundane things. 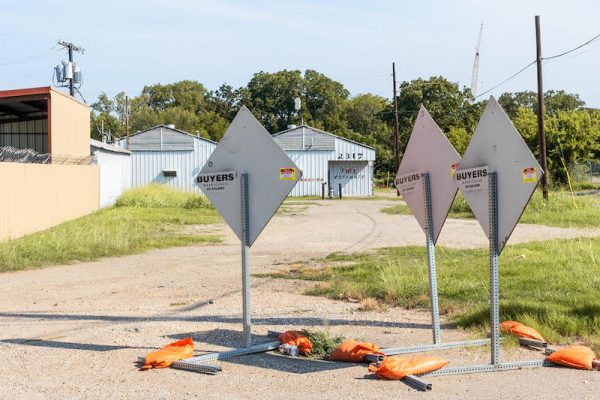 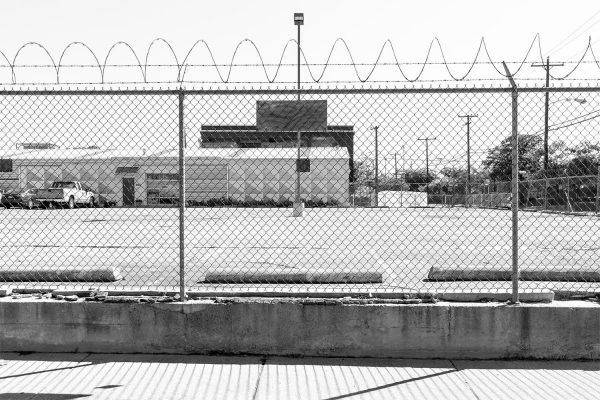 Dennie did us all a favor by curating this show, and his work demonstrates that he understands full well its mission. He shows us again and then again that the everyday can express a brand of majesty that lies in wait if we but have eyes to see. 8.18.00799 and 4.29.18.00726 are just two examples. He reminds us that our lives are filled with a fantastic wealth of visual scree.