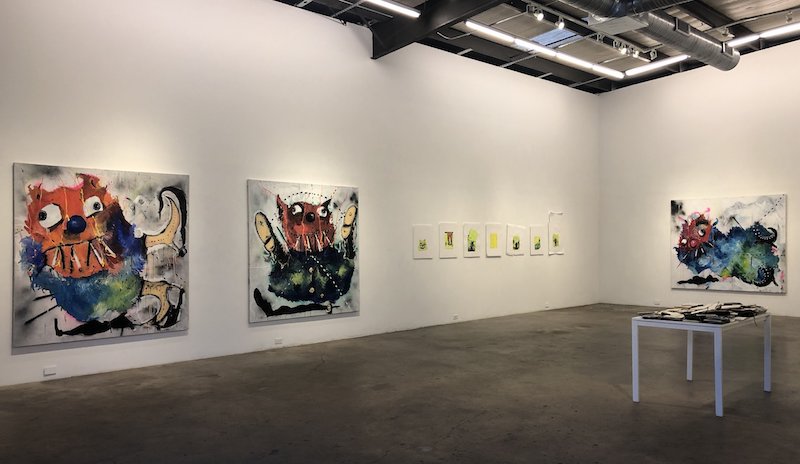 Not long after I publicly knocked Instagram as an art delivery system (I stand by that), I was nonetheless scrolling though it and spotted an image that made me sit up. A Dallas artist I’ve known for years, Nic Mathis, had just opened his first solo show at Dallas’ Erin Cluley Gallery, and a post of some images from it caught me off my guard. As I put it in a Top Five video that week, just after I’d seen the show in person: Mathis, a self-trained artist, has turned a corner with his latest body of work. 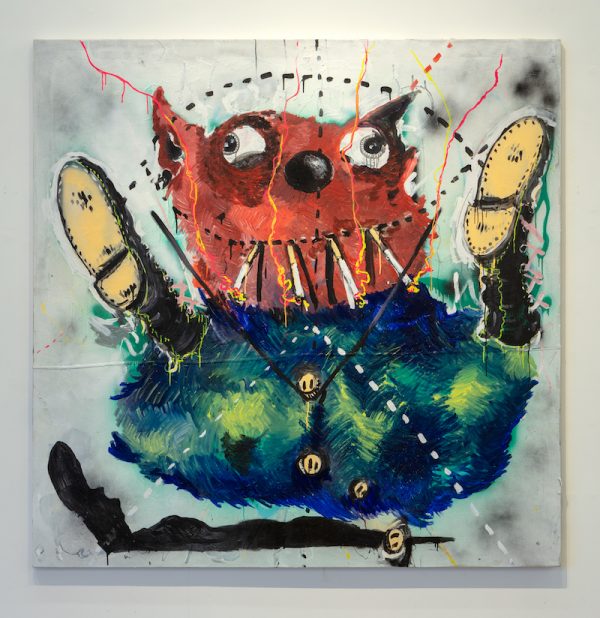 I like this work, despite my initial disappointment that one of the large, repurposed canvases undulates disconcertingly due to a lax stretch. Mathis has painted maniacal, furry creatures smoking cigarettes, kicking up their heels and threatening to burst off the picture plane. The brushwork is loose and convulsive in a way that serves the imagery, and vice versa. On Instagram I had read them as huge, goofy cats, but in person I also see the googly, roiling eyes and limbs of muppets (with the jumping-off point being Elmo in some of the accompanying drawings), or maybe rather the distorted and manic Peter Jackson version of muppets in Meet the Feebles. From canvas to canvas I also spot notes of R. Crumb, and Baselitz, and Guston, and another non-MFA’d American artist, Eddie Martinez. (Cluley was there  when I visited and she confirmed the influence of the latter two on Mathis’ new work.) I also see in these works some Katherine Bernhardt and Joyce Pensato, both of whom had solo shows at the Modern in Fort Worth in the last couple of years. Like the work of these other artists, the propulsive energy of Mathis’ characters here is contagious. They carry a confidence (or is it charming bluster?) I’ve not quite seen in his earlier work — except perhaps his earliest unhinged, sad horse-head sculptures from around 2005 — which has been getting better all along, anyway. 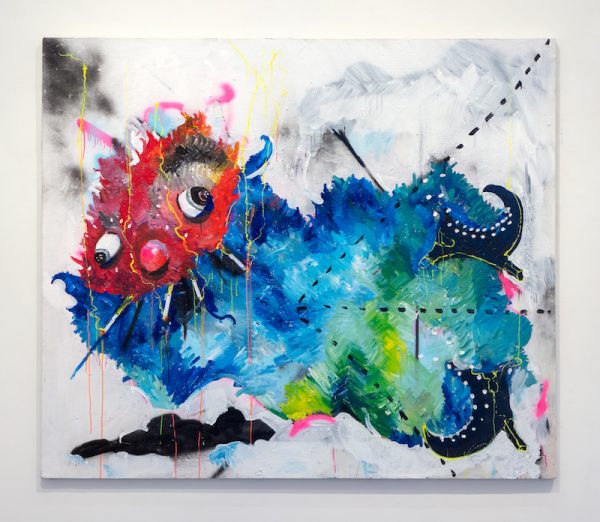 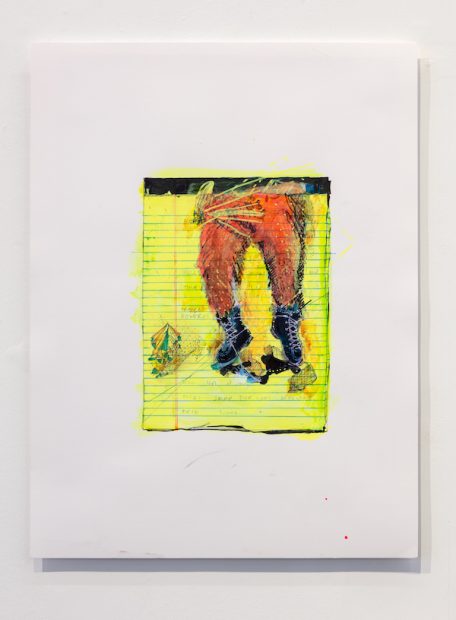 Mathis, it turns out, is simply a great synthesizer of all the things he takes in. I have no problem with that. What’s the saying for bands? You’re only as good as your influences. He’s drawn to the good stuff, and taking what he needs from it, and then making it his. Good art spawns its own, in the hands of the right progeny. 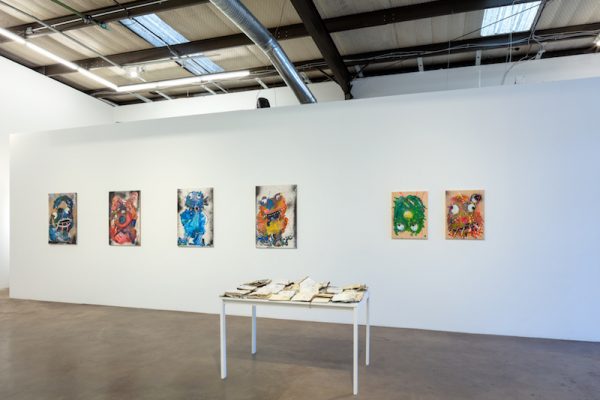 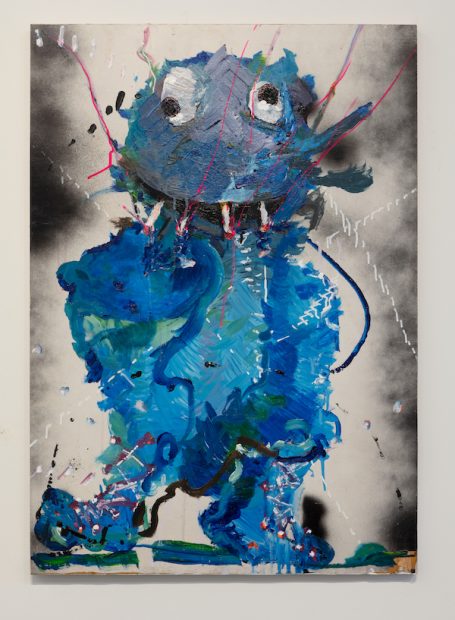 It’s turning out to be Mathis’ golden ticket. He’s always looking, always sketching, always making art and evolving — stacks of his sketchbooks are on display on a table in the middle of the space, as though we need to be convinced that the guy puts in the work. We don’t need to see the sketchbooks, though; if we’re out looking at art the way Mathis so clearly is, we can see in his finished canvases that for him the hard work has been happening all along, brewing and bubbling in his head and in his studio. I suppose one could make the mistake of believing that these paintings happened overnight, but anyone who’s made a leap forward in their own work knows that it takes years of private, patient pushing to finally get a breakthrough. 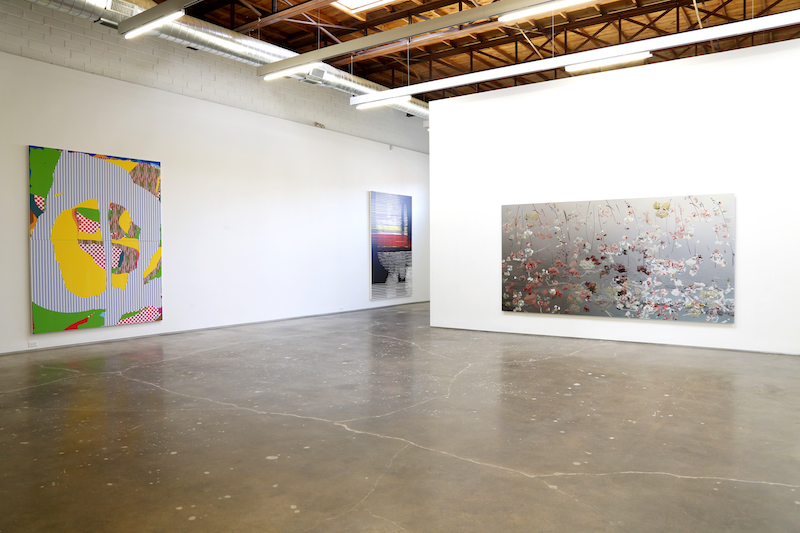 I’m personally guilty of making the bad joke that if an artist prints his or her imagery on canvas or panel, rather than painting it by hand, that we may as well call it a “print.” It’s not, of course, in the hands of a painter who has no intention of replicating or editioning the work. Painters who print their work conceive of the entire thing, start to finish, via a personalized process — often complex and consuming — that all but the most spontaneous painters employ to make paintings anyway. The definition of painting has been expanding for decades, and breakthroughs in print and pigment technology help this expansion along. 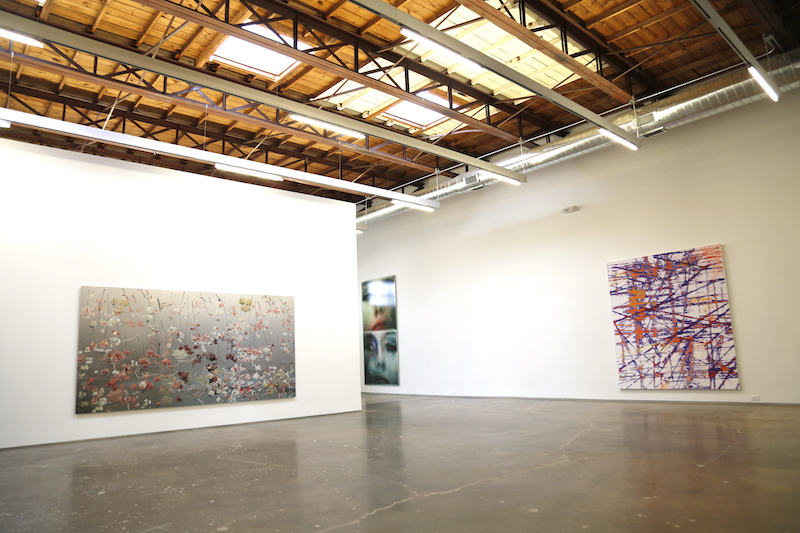 The current group show at Site131 in Dallas hones in on paintings that are printed onto their substrates. The show includes six artists from the region, some of whom are represented by other local galleries (Site131 is a non-profit and operates as a Kunsthalle), and three from outside the state. The show feels fresh and punchy: it’s clean and colorful, and the works range from sly and sophisticated to simply interested in communicating a kind of calm and methodical beauty. Some lean a bit political, with nods to the technology that allows them to exist. Depending on the combination of content and surface, printed paintings can easily creep into the realm of insipid interior design, but these works avoid that trap with the dexterity and thoughtfulness I’d expect from this group. 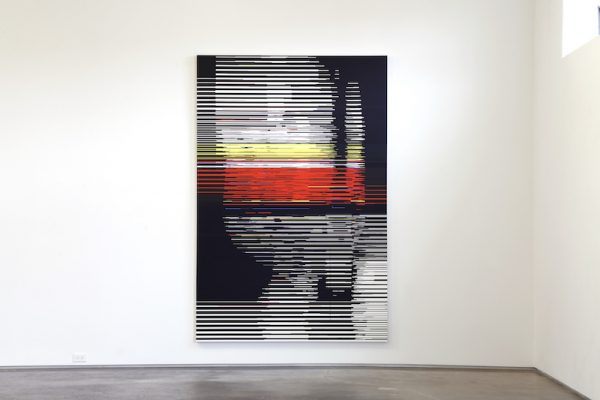 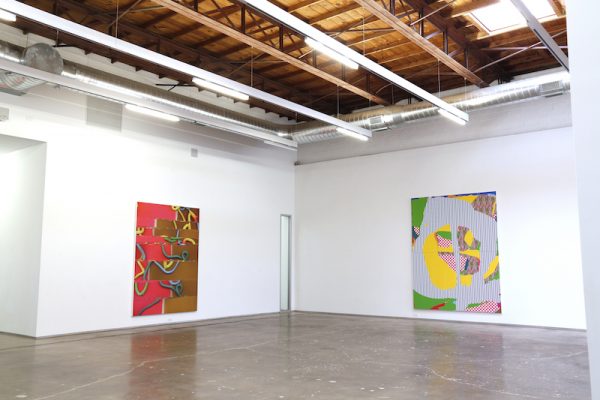 I’ve always liked Dallas-based John Pomara’s paintings, with their rich and tight colors, slick machine surfaces, and fast-looking abstracted racing stripes; when you look at them you feel like either they’re in motion, or you are. He’s fooled around with more figurative imagery in recent years, but a painting of his in the Site131 show really turns my crank, so to speak. The figure is in there — a looming torso in profile that has an almost dirty, voyeuristic presence made up of Pomara’s signature broken and glitched stripe line work, against a dense and liquid black background. This spy is doing something, saying something. It’s result is very cool, and sinister. (For more from these artists, there’s a new group show up at Barry Whistler, where more of these new Pomara paintings are on show, along with Lorraine Tady — buzzy, airy and electric here, and Liz Trosper — analytically rounded and satisfying, with a slice of scanner humor.) 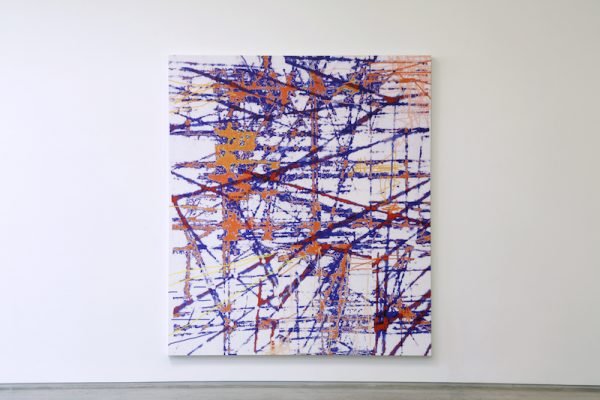 Zeke Williams, also DFW-based, decided about four years ago (and a bit later in life than the usual aspiring artist) to dedicate himself to being a full-time painter, and has recently taken the additional plunge of starting on his MFA in Fort Worth. 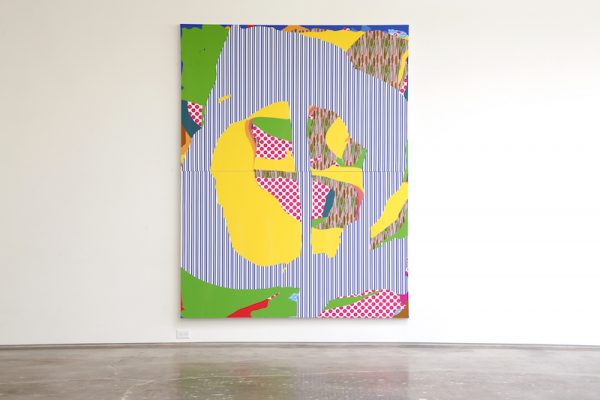 When he jumped in with both feet in 2014 or 2015 and got into a studio (after years of merely dabbling), he was taking a page from a playbook we’ve read in Houston, i.e. deciding (in capitalist, practical terms) to pretty much create an instant body of work that he hoped would seduce a market. I don’t know what market. And while I stood back and watched and wondered about the sincerity of the work, he’s diligently kept his head down, kept working, kept pushing, and — voila! I like Williams’ big new two-panel painting in the Site131 show very much.

We can’t credit grad school at TCU just yet; he’s only been there since the fall semester. We can’t credit that he’s shown work at Erin Cluley and at Gene Binder’s gallery in Marfa, although I’m certain this encouraged him to keep going. We can credit Williams’ determination, resilience, and skin thick enough to ward off skeptics like me who let the artists do all the hard, problem-solving work while I stand on the sidelines leveling judgement.

Williams has been truly good-natured and good-humored about his non-instant bid for instant success. Kudos, ZEKE. More paintings, please.

Thank you for this article! Truly great Nic Mathis exhibition. For my taste his large paintings, which I have not seen before, could function in any gallery, important collection or museum! Loved the drawings for some time now.

Good for Nic Mathis. I was an early supporter of his work and bought more than a few pieces without reservation. When he failed to get any traction in NYC, I thought, well that’s the forking art world. Lot’s of great art being made, not enough collectors. Here’s the really cool thing. Usually when artists have kids and start looking at things from a kids eye view, it gets tedious fast. But Nic has always had that talent that comes from mark-making uninfluenced by being “taught” how to make art. It’s easy to think outside the box, because you never were in the box to begin with. Thank you for your perseverance. And thank you Erin Cluley Gallery for knowing the good stuff when you see it.

Great write about one of the hardest working and easy to work with artists in Texas! Nic’s new paintings are brave, and the exhibition is brave, and that’s a rare thing to see anywhere in painting today, at any level. Congrats Nic!