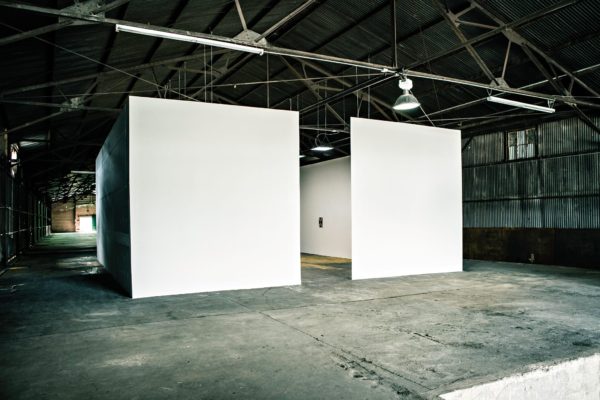 The Box Company, a new art space founded by Jason and Nancy Koen, will open its doors this weekend with a show of new paintings by Dallas’ Francisco Moreno. A second show of new work by DFW artist Paul Winker will also debut.

The Box Company is housed in a 1930s corrugated industrial building (a box manufacturing company back in the day) west of Fair Park and south of Deep Ellum. The main gallery space is actually a rather dramatic clean white box built within the larger (14,000 sf) space. The building once belonged to Jason Koen’s grandfather. He and other family members bought it from a trust recently and have been working to transform it for art exhibition.

Jason Koen was an exhibtions coordinator at the Goss-Michael Foundation several years ago, and has been a freelance version of the same more recently for spaces like the Dallas Contemporary and the Dallas Museum of Art as well as private collections.

This show is opening in collaboration with Dallas’ Erin Cluley Gallery, which represents Moreno. The Koens plan on having about six shows a year in the space, and building out some of the remaining space into artists’ studios.

This inaugural opening takes place this Saturday, Oct. 1 from 7-10 p.m. The address is 2425 Myrtle St., Dallas. For more info, go here or here. The space and show are featured in Glasstire’s most recent Top Five list and video, which you can find here.

It did not happen — the Dallas Fire Dept. and the DPD shut it down! I was told during a Friday night preview there were 20 police officers plus fire marshals there. Saturday it was locked and dark.

When Dallas was politically Red, we were bidness friendly. Today, not so much. Nobody wants injury, but there needs to be a solution. A properly marked exit door and a couple of fire extinguishers should do it. Have any galleries anywhere burned during an opening?