by Colette Copeland May 20, 2022
FacebookTwitterEmail 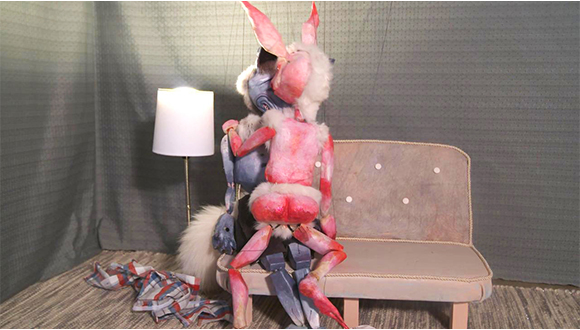 “I use humor, sexuality and rage to push back against the policing and politicization of women’s bodies.”
-Sarah Fox

Sara Fox’s exhibition at Erin Cluley Projects in Dallas is my first foray back into art viewing since my return from the Venice Biennale a few weeks ago, with my head overflowing from an over-indulgence of art. My first impression is that Fox’s work would fit in beautifully with Biennale curator Cecilia Alemani’s vision. Inspired by Surrealist artist Leonara Carrington’s children’s book The Milk of Dreams, the global exhibition in Venice features many artists whose work incorporates mythical, hybrid creatures who respond to current realities while imagining utopic new worlds.

Fox creates corporeal hybrid creatures who enact universal themes of life — love, loss, rebellion, and sex. Her show at Cluley Projects includes exquisitely detailed wax crayon drawings of her characters. Faun depicts a young androgynous goat/human creature who is enveloped by forest foliage. Vines sway into the form of his/their body while caressing his/their legs and buttocks. Six pairs of eyes peer through the tangled growth. The eyes appear to be staring at me — the viewer, rather than the faun. The faun is a symbol of fertility and peace, full of fun and merriment. However, in Fox’s drawing, he/they is an object of desire. The eyes are watching, perhaps as a symbol of moral conscious or pervading hegemonic surveillance.

My two other favorite drawings feature Bad Bunny, the star of the show. Both Crop Dusting the Patriarchy and Pissing in a Cowboy Hat are direct responses to the abortion law passed in Texas last year, which restricted women’s access to safe medical abortions. Invoking the Texas vernacular, these subversive drawings just “bless my heart.” The message is particularly salient now given the uncertainty of Roe vs. Wade’s future. 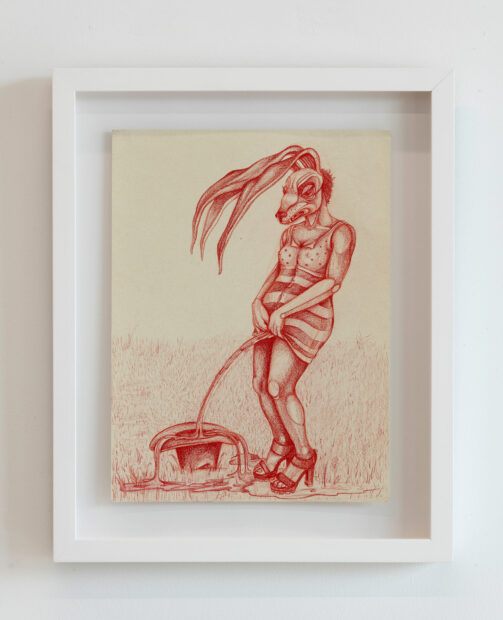 “Pissing in a Cowboy Hat”

The exhibition’s headliner, Bad Bunny Gets Lucky, is a seven-minute video featuring two paper-mâché marionettes sculpted by Fox. I visited her San Antonio studio two years ago where she first introduced me to Bad Bunny and her companions; the artist created them after taking a puppet-making workshop. This video is the second in a series of Bad Bunny puppet shows, and was commissioned by the McNay Museum in San Antonio for an exhibition with seven other San Antonio artists.

Just weeks before the scheduled opening at the McNay this spring, the museum asked Fox to re-edit the video, eliminating the sex scene. The artist refused, however, and offered other installation possibilities, including a curtained-off area with warning signs of explicit content. Ultimately, her work was not included in the show and five of the seven other artists pulled out of the exhibit in solidarity with Fox. This result is perplexing, given that the curators asked her to create another puppet show after viewing the first Bad Bunny video which addresses addiction and depicts a naked, twerking bunny who gets black out drunk. 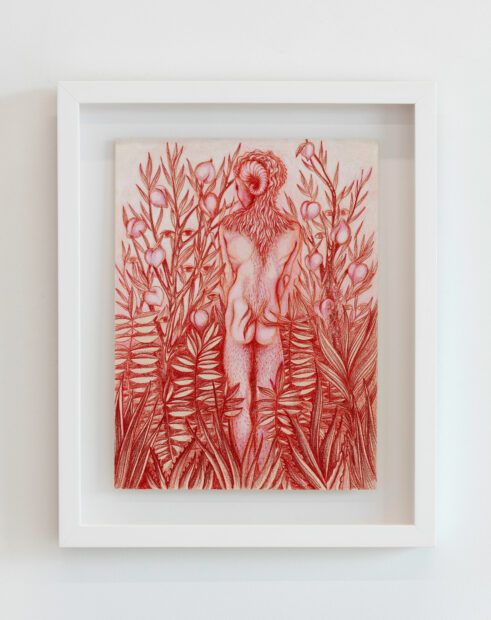 I watched the video twice, trying to determine what about it was so abject as to cause censorship. It would not receive a G rating, but much of contemporary art is geared towards an adult audience. In the opening scene, Bad Bunny is on the Bumble dating app swiping through her phone. She swipes over a couple of men, settling on Wolf as her intended hook-up for the night. The two have a date in a restaurant, where Bad Bunny leaps onto the table and devours Wolf’s bloody steak. The next scene depicts a very tame simulated sex scene in which Bad Bunny bites Wolf post-coitus, and he falls to the ground bleeding silver. Interspersed within the puppet scenes are jump cuts to the artist dressed as the bunny, wearing a mask and gloves, licking the steak’s blood and later smearing Wolf’s silver blood on her mouth.

Pregnant with subversive humor, the video examines female desire. Bunny and Wolf communicate through sounds — hiccups, sighs of pleasure, howling, and laughing, evoking animalistic fervor. Bad Bunny’s character looks like she’s had a hard life, like she struggles with addiction — alcohol, tobacco, and perhaps meth. Wolf looks like a player who spends a lot of time in front of a mirror. But this is the reality of our nation: just look at stats on opioid and alcohol addiction in our country. One only has to watch a few episodes of Euphoria on HBO Max to see what is normalized in youth culture today. 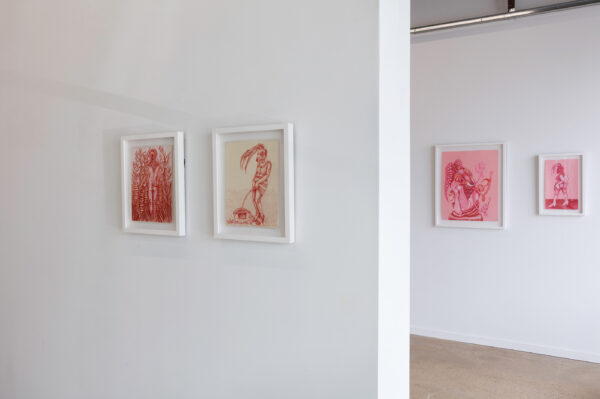 Does the video offend the hegemony, because Bad Bunny is not a dumb bunny, but instead takes control over her own desire and pleasure? Does it offend due to the suggestive sexual overtones of the artist performing for the camera, thus rupturing the illusion of the traditional fairy tale narrative where the wolf eats Little Red Riding Hood?

Fox’s work is prescient, not only given the socio-political climate in Texas, but in our nation. Women’s rights are being stripped away, and I fear the world of the Handmaid’s Tale might be closer to our present than we think. The message of granting all people in society equal access to economic freedom and other basic human rights from Margaret Atwood’s book is one that we can also learn from Bad Bunny.

Bad Bunny Gets Lucky is on view at Cluley Projects through May 28, 2022

Did the reviewer and/or editor fact-check and offer the McNay a chance to present its version of events to rebut these “censorship” fairy tales. If not, readers should demand a retraction or correction. Like all museums, the McNay can always “do better,” but so can Glasstire. Right?

You can read the full story about what happened with Fox’s work at the McNay in a previous article Glasstire published, which is linked in the above story. It includes statements from the McNay: https://glasstire.com/2022/03/10/artwork-pulled-from-mcnay-art-museum-to-debut-at-blue-star-arts-complex/

Benita,
When there are words in blue or green in an article, that means it’s a link to potentially important, previously published material. It’s a good idea to click on those and do your research before you jump to conclusions.

What happened to me and my work was not a fairy tale, and there have been published articles and talks documenting what happened.

I can vouch for Glasstire’s slow, methodical, professional research throughout this entire process. From the beginning they have talked with the museum, with several other artists involved, and myself. Fact checking and publishing the truth the entire time.

Damn, who hurt you? Your comments are so well written it could be convincing what we as artists should do but you can’t be an artist. What artist would lean in so hard to the literal spaces that NEED ARTISTS TO EXIST BECAUSE THAT IS WHAT THEIR EXISTENCE IS PREDICATED UPON as to forget that, or simply ignore the institutions history of the kind of artists they support, or the political climate of Texas in the past few years. Is this comment a bit of a hit? Yes. Its kind of a review of a review of a review. Make some art, some great art, and we won’t say a thing about it, but please be through. Sarah’s exhibition was/is a stunning display of how art can be beautiful, provocative, timely, and funny! The Colette captures that wonderfully. As an artist that has been censored it rarely looks like “white” supremacists book burnings, its usually someone who would love to have drinks and talk to me about their opinion when i am literally doing my job as an artist. Please don’t get it twisted, us as audience does not speak toward the validity of the thing that the artist does and any concessions that the artist makes is completely up to the artist. Most institutions would be better served with a decent pr team and some therapy but those things are expensive in a place that doesnt value education, let alone art, or artists.

I agree that this exhibit reminds of the Handmaid’s Tale. The imagery couldn’t be more timely, especially given the current political climate. Delicate with an edge. Dark humor served in pink, with a puppet that drinks. Simply adorable.

AJ–Thank you for taking the time to read and for your comments. I love the phrase, “dark humor served in pink.”

Thanks, but that story makes no mention of suggestions to edit the video. It does say that the artist and curators disagreed on what work to display and how best to display it. When does this not happen? Even in artist-run spaces, compromise is a given. The artist makes beautiful work, but I wish some of her elders would have compassionately educated her on the difference between censorship and curatorial prerogative. I also wish the other artists wouldn’t have been bullied into pulling out in “solidarity” with an artist’s personal decision. And I shudder to think how many future San Antonio artists will now lose the opportunities their predecessors fought so hard for because museum professionals won’t be so eager to risk defamation as a social media reward for spotlighting “emerging” artists. And, Glasstire, this “review” remains (at best) misleading, and incessantly muses about why something which did not occur occurred. Killing the truth in the service of a sexy narrative makes for great clickbait and “reality” television, not great art criticism, journalism, and not Glasstire at its best.

If the McNay needs to show only work by dead white men to avoid being held accountable for being a capitalist patriarchal institution, then that is their prerogative.

Texas, and especially San Antonio, is really great about supporting emerging artists that do not fall within what the white art institution has established as ‘appropriate’

In other words, the McNay is an outdated art space that is not needed for an artist to survive. Artists have, and will, continue to survive and thrive without having to compromise their artistic integrity.

BENITA OCASIO, what makes me shudder are your outdated and uninformed opinions and assumptions. Take your archaic views elsewhere. YAWN.