The San Antonio Museum of Art announced this week that it has acquired three works by contemporary African American artists: Kevin Beasley, Rodney McMillian, and Martine Syms. The works by Beasley and McMillian are currently on view in the museum’s contemporary galleries, and the piece by Syms will be installed in February for Black History Month.

All three artists are no strangers to Texas’ art scene: Beasley created a site-specific installation and performance in Project Row House’s El Dorado Ballroom for the 2017 CounterCurrent program, and was also a performer at the Dallas Museum of Art’s 2015 Soluna Festival. McMillian was the winner of the Contemporary Austin’s inaugural $100,000 Suzanne Deal Booth Art Prize and will be opening his show in Austin next week. Before that, McMillian showed at the Contemporary Art Museum Houston in 2014, at Project Row Houses in 2010, and at Artpace in 2008. And Syms showed at Project Row Houses in 2016 and has a work in the Museum of Fine Arts, Houston’s permanent collection.

“Each artwork was made in the last year or two and reflects the most critical ideas and issues motivating artistic practices today. I am thrilled to add works of such intelligence, imagination, and lasting relevance and meaning.”

See the titles and descriptions of the three pieces below (via SAMA). 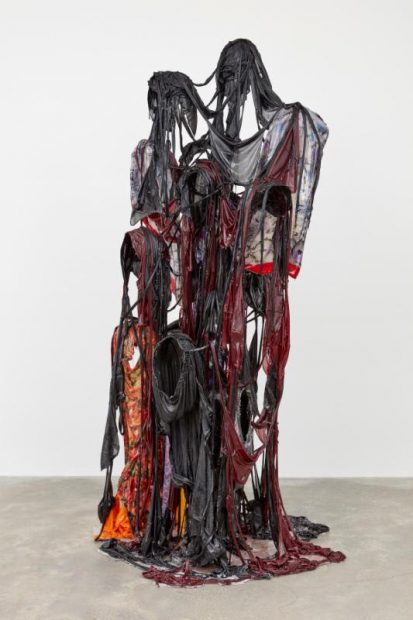 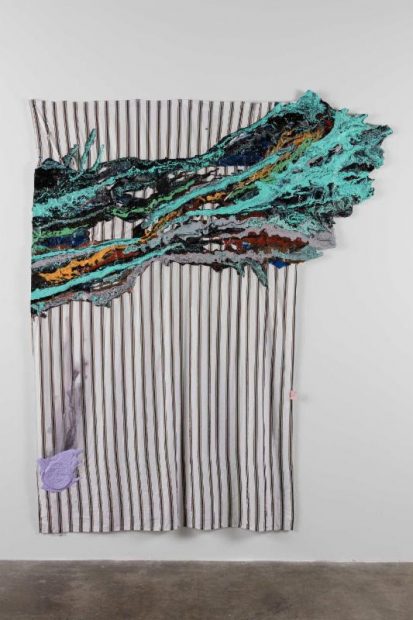 Rodney McMillian’s Northern Lights: For Uhura (2016)
“McMillian’s visually striking sculptural painting Northern Lights: For Uhura (2016) is one of his ‘landscape paintings,’ an important subject motivating his artistic practice since 2003. On a bedsheet, sourced from a thrift shop with its price tag still attached, the artist has poured thick layers of richly colored latex paint that recalls patterns in the night sky or an aerial view of a turbulent river. In the title, McMillian references a fictional character in the Star Trek television series originally played by Nichelle Nichols. Uhura, whose name comes from a Swahili word meaning ‘freedom,’ was one of the first major television roles written for an African American actor. Science fiction serves as a touchstone for McMillian, who finds in it an analogy for history in that both often reveal more about the present than the worlds of the past or future they seek to conjure. The size of the bedsheet alludes to the intimate encounter of bodies in bed, ‘to the pleasures we have in bed like sleep, reading, sex,’ says the artist.” 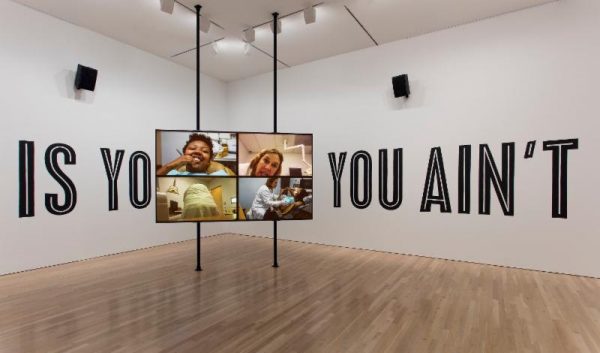 Martine Syms’ Laughing Gas – full installation (2016)
“This immersive work includes a four-channel video installation (SHE MAD: Laughing Gas), a large painted wall text (IS YOU IS OR IS YOU AIN’T), and a large laser cut acrylic wall piece with artist’s clothes (Bertha Cut-out). The installation debuted at the Hammer Museum in Los Angeles as part of the 2016 biennial, Made in L.A. 2016: a, the, though, only. Laughing Gas is the pilot episode of a situation comedy titled SHE MAD, a television series that Syms initiated in 2015 with the work Pilot for a Show about Nowhere, which in its early stages took the form of an installation of documents, images, and research materials filtered through a semi-autobiographical account of Syms’s life as a young black woman trying to ‘make it’ as an artist in Los Angeles.

For the SHE MAD: Laughing Gas video installation, Syms uses Edwin Porter’s 1907 nine-minute silent film of the same title as a starting point. Her protagonist is inspired by Bertha Regustus, the African American actress in the film whose character’s infectious laughter, triggered by a dentist’s administration of nitrous oxide, affects everyone she encounters over the course of a single day. In SHE MAD: Laughing Gas, Syms follows the premise of Porter’s film, casting herself in the role of “Martine” in a series of largely improvised scenes. After she is given nitrous oxide in a dentist’s office for a tooth extraction, she is told her insurance does not cover the surgery, and she must pay or leave. Like Bertha, Syms ends up walking alone in public, often laughing and confused. Throughout the looped video are references to visual styles that reflect the evolution of cinema into recent forms such as television, the internet, and surveillance and body cams. With Laughing Gas, Syms continues her explorations of the film industry as subject and producer of values, ideas, and ideology.”