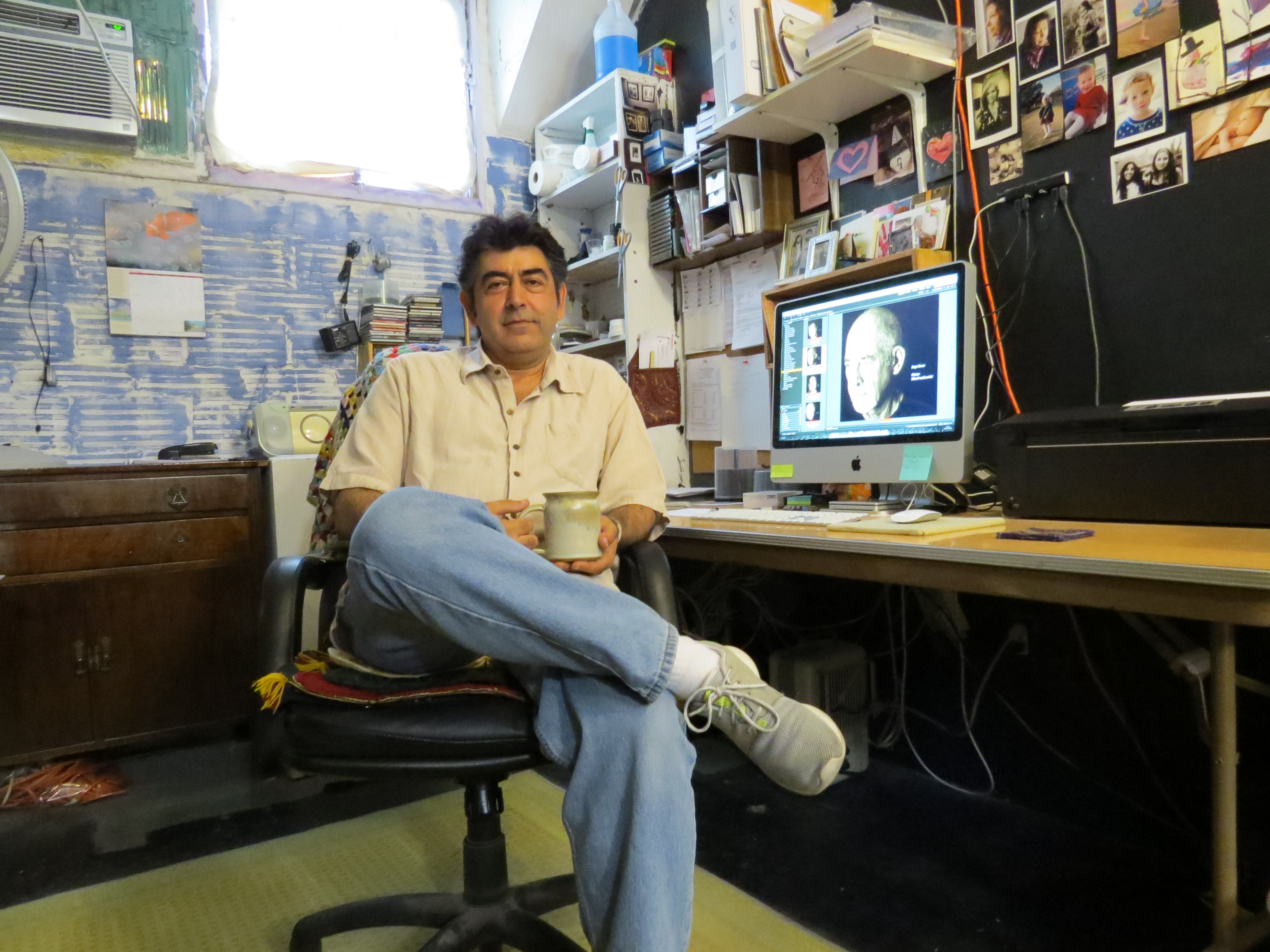 Iranian-born photographer Ramin Samandari arrived in Odessa, Texas in 1978 at age 17, sent there by his parents to avoid mandatory inscription into the military, which would have happened the following year. All on his own, having left behind his family and a culture of revolution, martial law, and regime change, Samandari thought he might return to his homeland within a few years, but then the Iran-Iraq War broke out. So he renewed his U.S. visa, eventually got a green card, and in 1990 he became a U.S. citizen.

A resident of San Antonio since 1988, Samandari decided in the early ’90s to pursue photojournalism, so he took some courses at San Antonio College and started freelancing for local news publications. Although he enjoyed his assignments, a problem kept emerging when he presented his photos to his editors: they were often too artful for the daily press. So he shifted focus and has practiced fine art photography for more than fifteen years.

Throughout the ’90s, Samandari exhibited mostly in theater lobbies and at restaurants in San Antonio and Austin. In 2001, he had solo exhibitions at the University of Incarnate Word’s Center for Spirituality, the Guadalupe Cultural Arts Center, and the San Antonio Museum of Art. He has been a stalwart of the San Antonio art scene ever since. Currently he is exhibiting his Faces of Artpace project in Artpace’s window space and, on July 7, he will open a more expansive version of the overall project, San Antonio Faces of Art, at the Department of Cultural and Creative Development’s new Plaza de Armas Gallery. 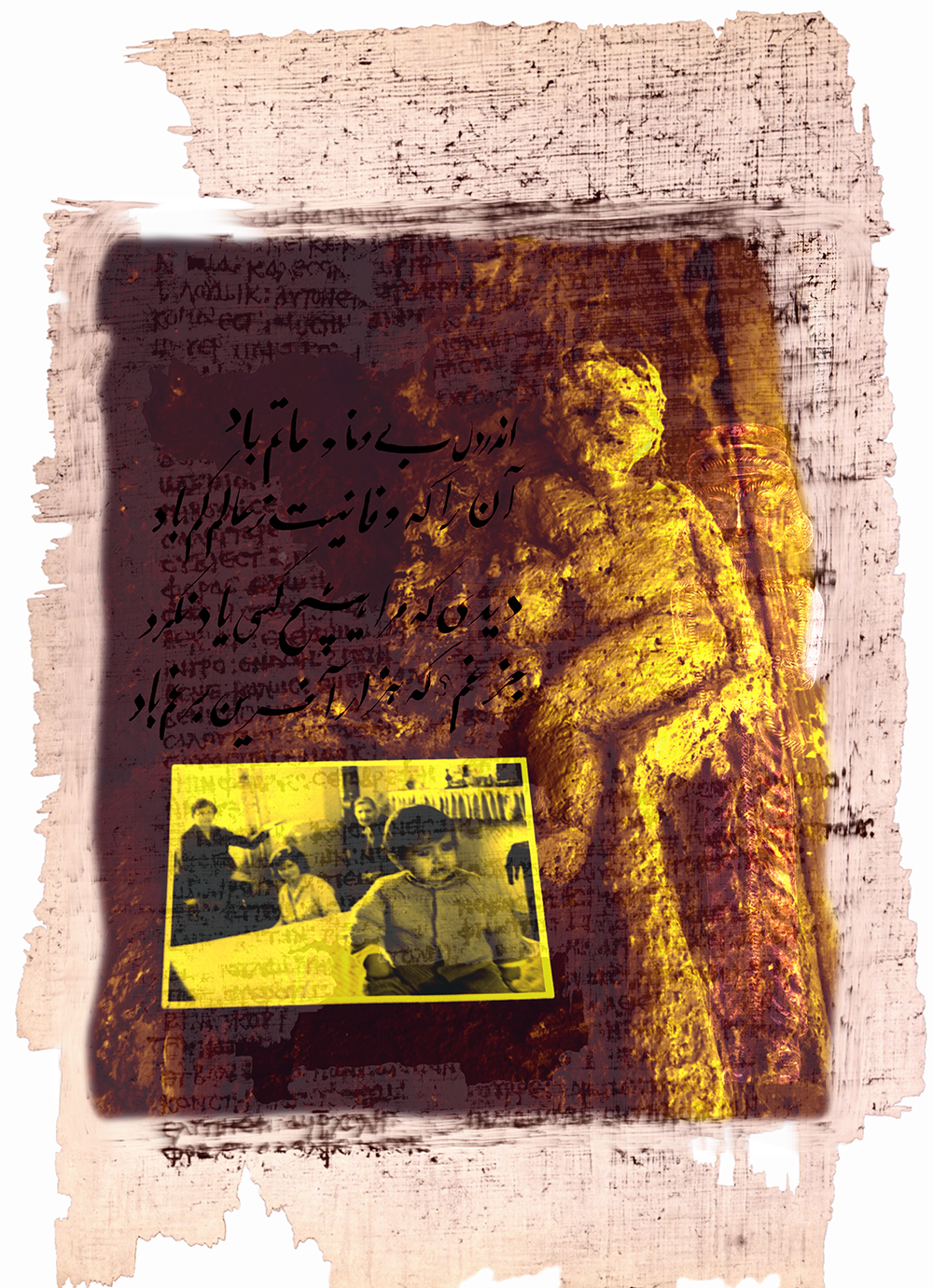 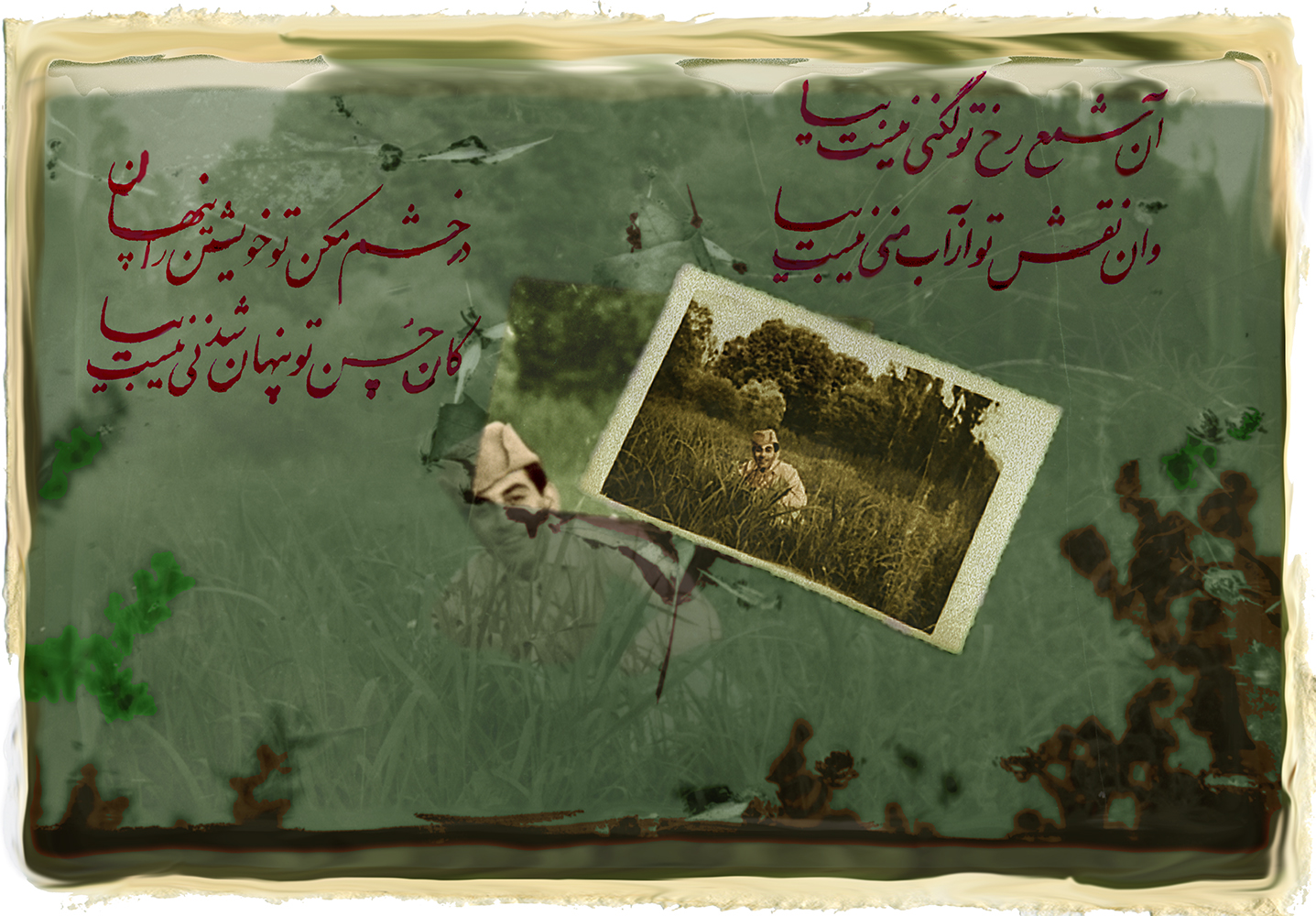 Many of Samandari’s earliest photographs incorporate passages of poetry by the 13th-century Persian poet Rumi, whose wisdom has often guided the artist when coping with deeply personal issues. Following a trip to Iran in 2000, Samandari brought back old family photos.  As he questioned the disparities between his distant past and his life in San Antonio, he took digital photos of the vintage snapshots set against various backdrops around the city and reworked them in Photoshop, adding in scanned passages from Rumi’s poems that he wrote by hand in Farsi. For Sorrow (2000), a photo of Samandari as an infant was photographed set against a sad looking sculpture that he came across at an old home, and then merged with Rumi’s poetry advising that sorrow is our one supreme and loyal friend. In a related untitled work, a photo of the artist’s father as a young man interacts with green grass and text which instructs that our true essence does not come from our parents. 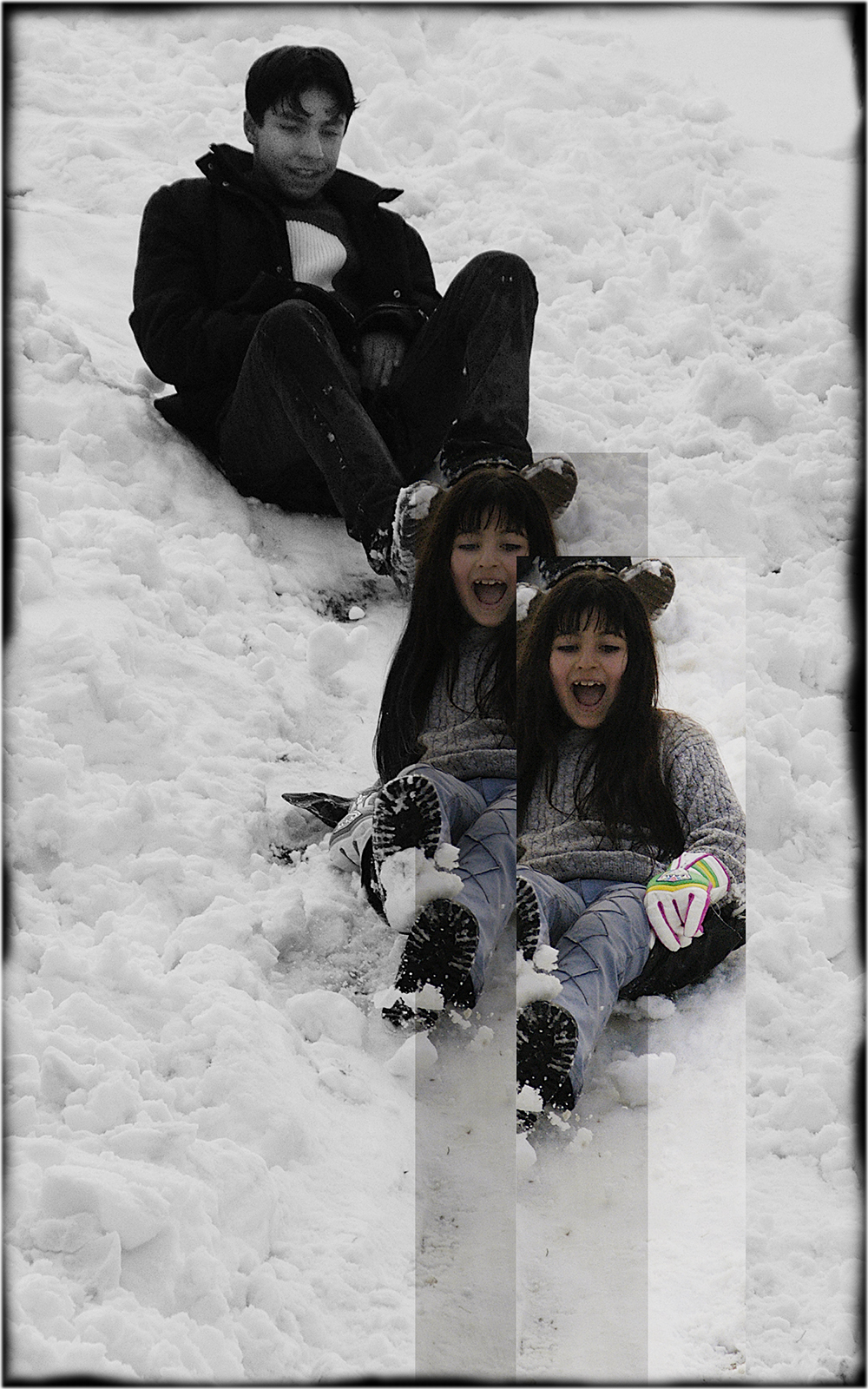 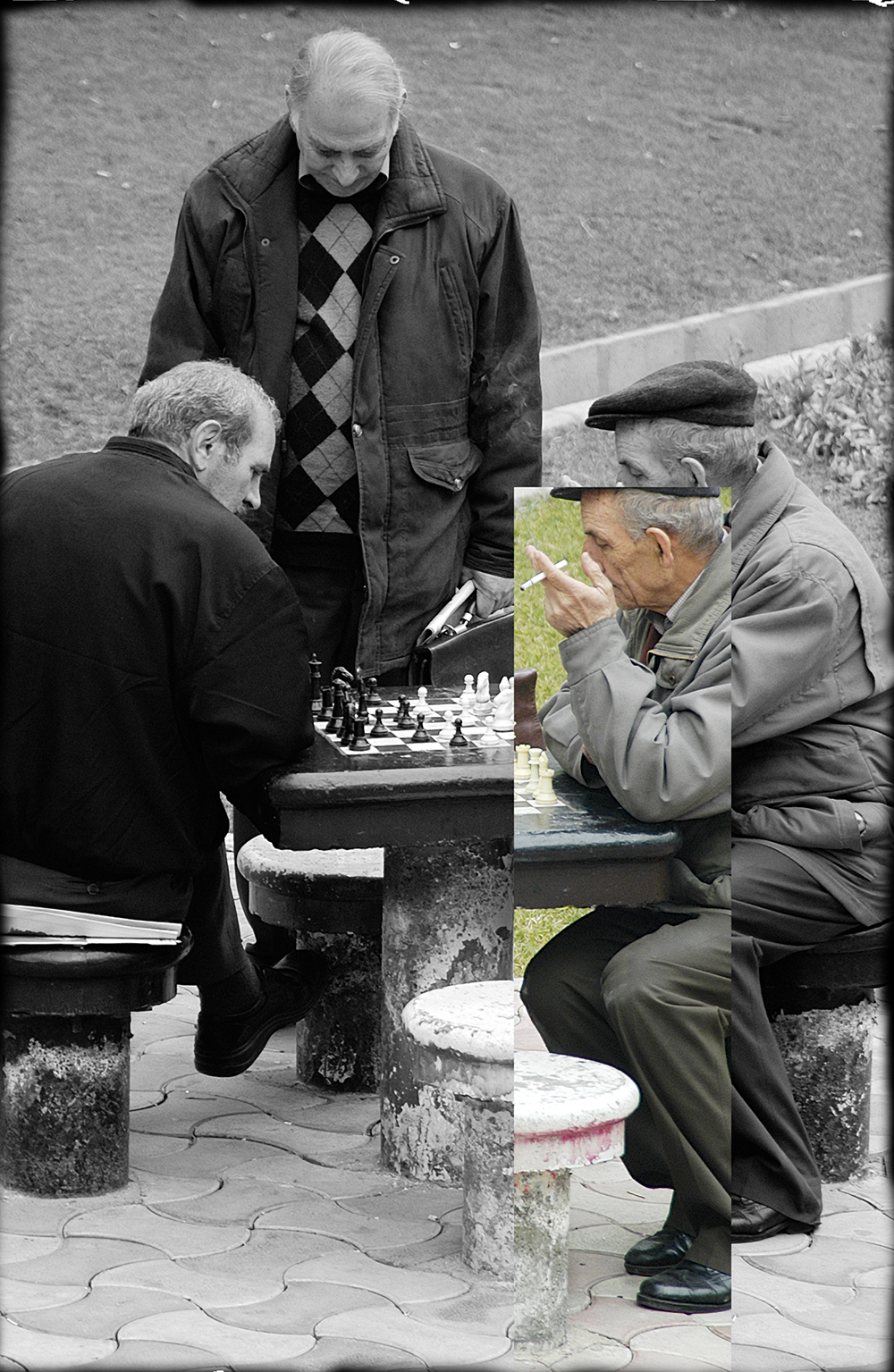 For an exhibition at Blue Star Contemporary in 2005, Samandari exhibited 100 photographs documenting everyday life in Iran. Using street photographs that he shot during a 2003 visit, Samandari’s objective was to point out that there is far more to Iran than just the media portrayal of protests, riots, and militaristic activity. Using digital technology, he converted his photos to black and white, but repeated and shifted sections highlighted in full color to bring sharper focus to the joyful or relaxed nature of common pastimes, such as sledding through snow or playing a leisurely game of chess. 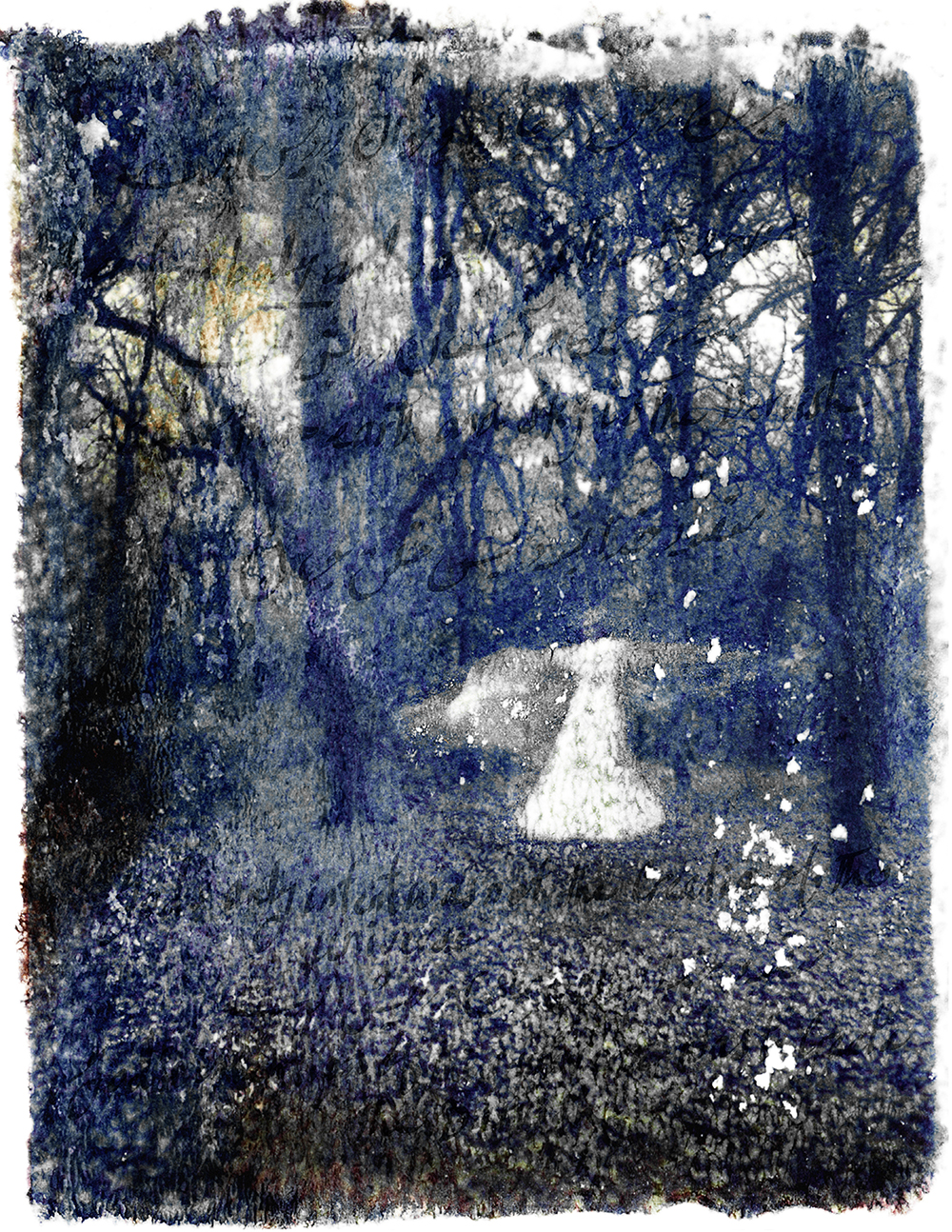 In 2007, Samandari returned to Rumi’s poetry as a source for In Search of the Beloved, a series he exhibited at Bihl Haus Arts. In the poems, the term ‘beloved’ refers to both nature and God, so Samandari created images that use a soft atmospheric haze to suggest a divine presence in nature. To begin, he took photographs of women in outdoor settings using an old 4 x 5 inch Polaroid camera. He then made small transfer and emulsion lift prints, which he scanned and enlarged while adding in Rumi’s texts, seen faintly in the backgrounds and this time written in both Farsi and English—a conscious acknowledgment of Samandari’s dual citizenship. 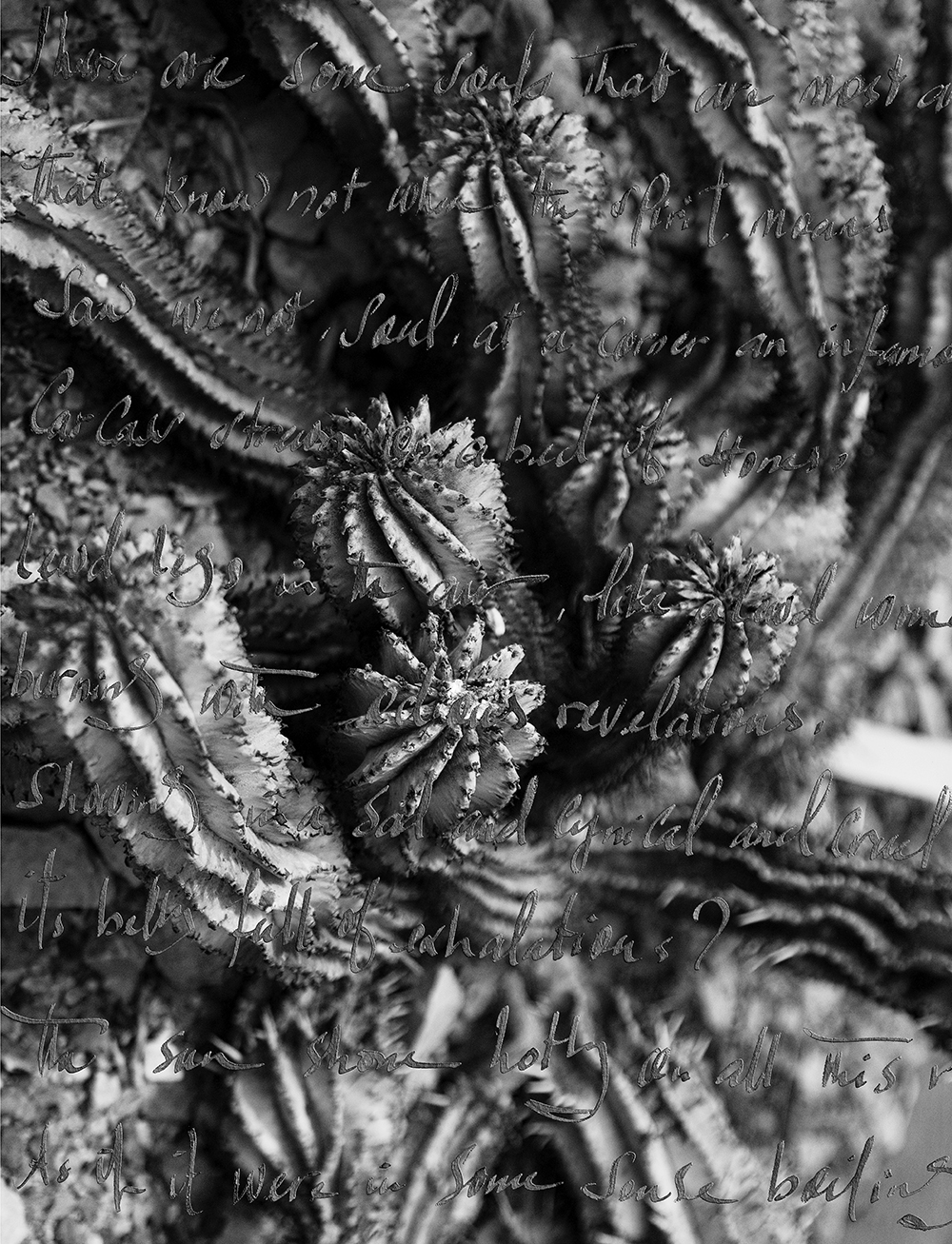 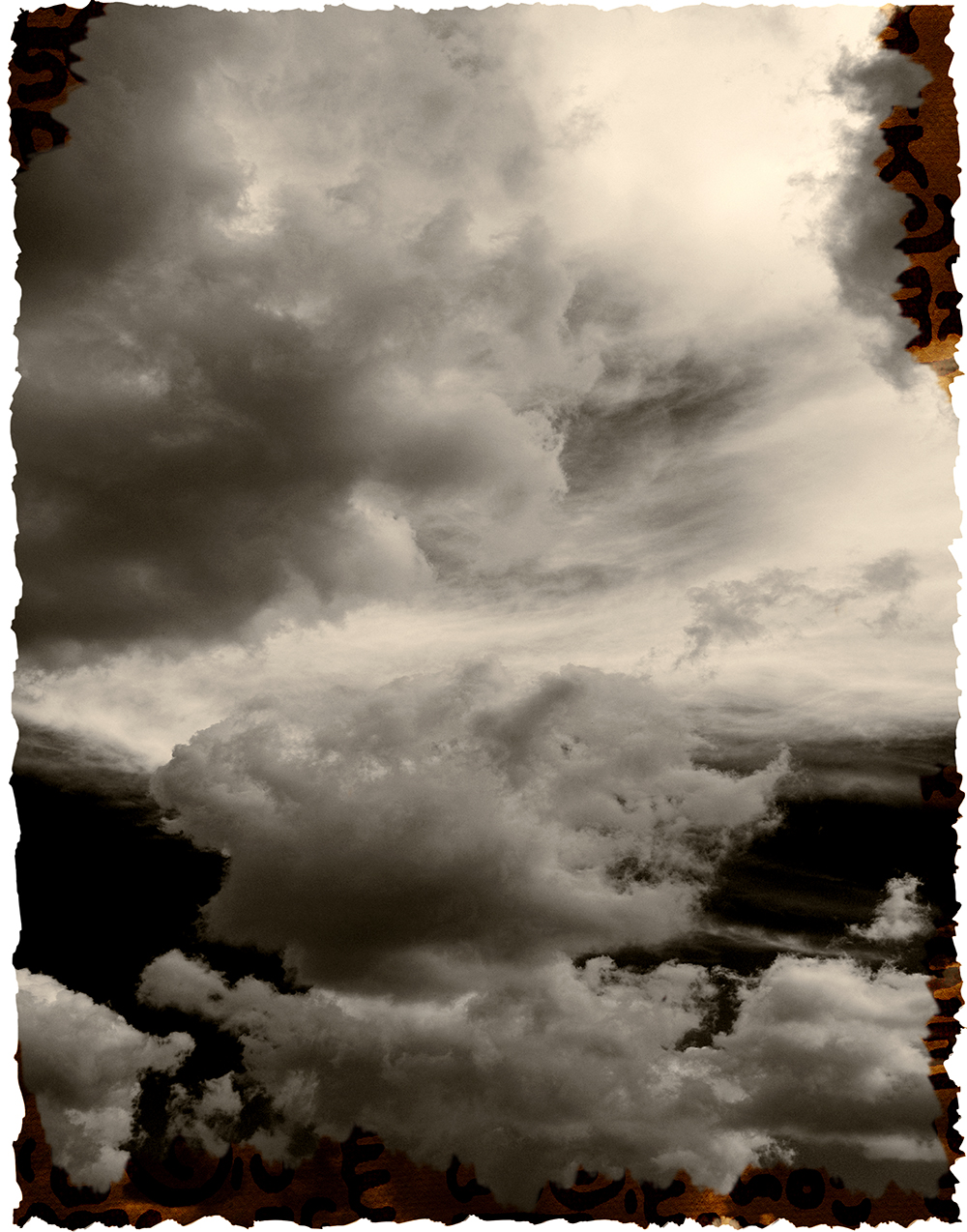 Samandari next turned to plants and clouds as subjects. In his Revelations in the Landscape series, exhibited in 2010 at the UTSA downtown gallery, he coupled jarring images of prickly plants with scanned handwritten excerpts from Charles Baudelaire’s The Flowers of Evil (1857), a collection of poems on eroticism, decadence, and the darker side of 19th-century French society. In contrast, an uplifting tone dominates Samandari’s Veils of Nephele series, which debuted in 2011 at the Southwest School of Art. Viewing these as “cloud portraits” and considering clouds to be timeless, the artist superimposed cloud imagery over scans of aged-looking texts, and titled each photograph using phrases from The Book of Tao, which shares Rumi’s interpretation of nature as something eternal.

Samandari’s interest in portraiture took root in 2014, when he became motivated to search for his inner soul by creating a daily self-portrait for a period of about a month. While physical features such as clothing and hairstyle vary from one image to the next, all the self-portraits share sharp lighting and a directness of Samandari’s gaze, which seems to intensify as the series progresses. 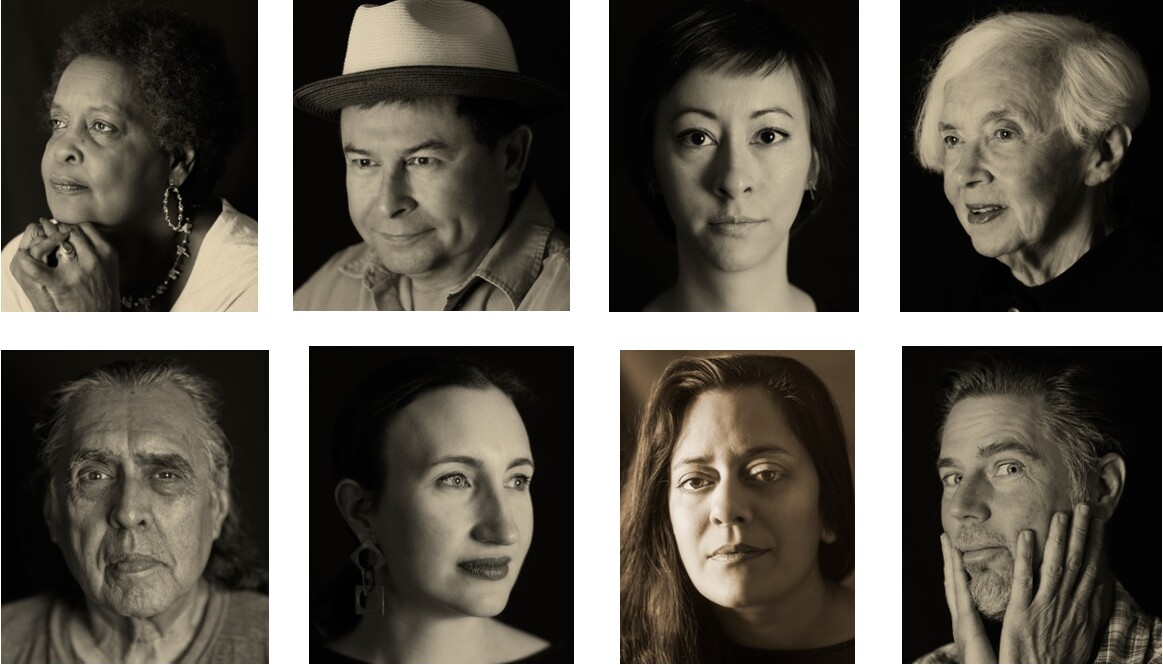 As friends visited Samandari’s weekly open studio and saw his new direction, the idea emerged of photographing them as well. Because many of his friends are artists, Samandari became interested in devoting a new series to artists’ faces. Eschewing the more common approach of photographing artists in their own environments, where they might feel too much at home, he opted for sittings in his studio with the goal of shooting each portrait in a single take. Although prep time varied from being very brief to more extended conversations with Samandari, each subject was at some point asked to close their eyes and then open them, at which time the picture was taken. As many of the subjects began posting their portraits on Facebook, the project really took off, expanding beyond being limited to artists with the inclusion of curators, writers, arts administrators, collectors, and gallerists—the larger San Antonio visual art community. Samandari’s goal is to locate a sort of collective soul.

For his window installation Faces of Artpace, Samandari presented his photographs of artists who have exhibited at Artpace over the years, along with images of staff and artists who have been independent contractors there. Portraits of residents and exhibiting artists occupy the main space, suspended from the ceiling, with residents’ portraits being the largest prints. The smallest images, which are of support staff and contractors, are arranged in groupings on the walls to either side. Experienced from either the street or inside the space, the installation has an inviting sculptural presence, and it can be navigated bit by bit.

At the Plaza de Armas Gallery, Samandari is exhibiting 165 prints from San Antonio Faces of Art 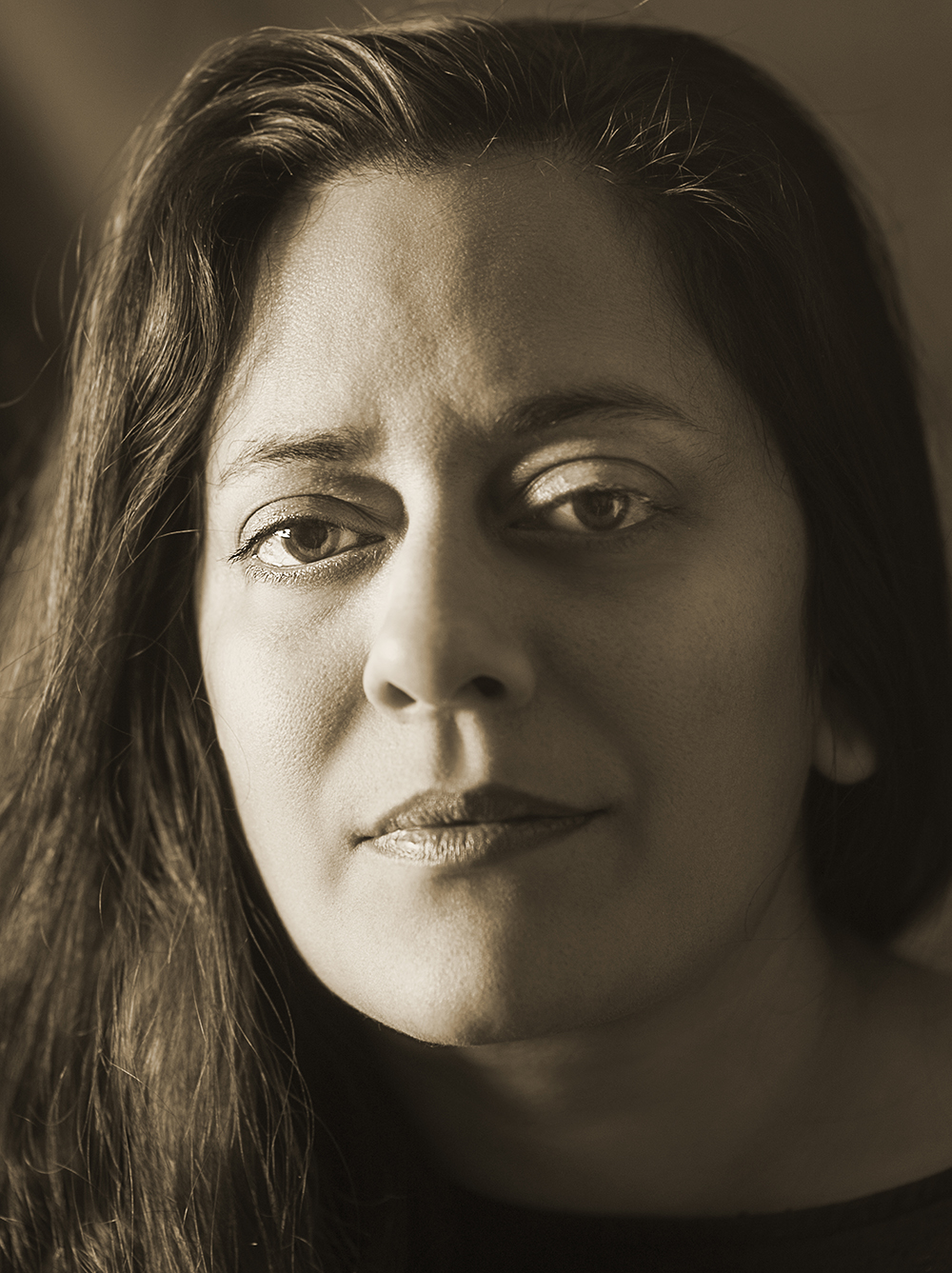 At the Plaza de Armas Gallery, Samandari is exhibiting 165 prints from San Antonio Faces of Art (disclosure: I am among the subjects), accompanied by a slide show of the same images plus an additional 123. Collectively, the sepia-toned portraits reveal the San Antonio art community to be racially and ethnically diverse. Individually, each subject is framed at just the right proportions for a postage stamp. With faces bathed in soft lighting, the quietly expressive portraits seem aesthetically antithetical to those by the pioneering German photographer August Sander, who in the 1920s set out to photograph every type of human physiognomy using a more objective documentary style. Rather than inventory outward appearances as Sander did, what Samandari documents—as he and his subjects are joined together in moments of concentrated stillness—is the universal sensation of being alive.