The adjective realistic is often used when something is represented true to its actual appearance without being idealized or abstracted. When applied to the painting of objects, this definition does not recognize that representational artists who depict three-dimensional objects are using a sophisticated type of abstraction to render these objects convincingly in two dimensions. Fort Worth painter John Hartley unabashedly presents his work as representational art — this has been his occupation for the past 30 years. While he has painted many subjects, his preoccupation for the last 15 years has been painting toys and figurines, many of them vintage. “I quickly understood that the playful content could have multiple meanings or open-ended interpretations depending on the viewing audience’s experiences.” Of the 19 paintings in his current solo show at Artspace 111 in Fort Worth, 18 were produced during the past year. 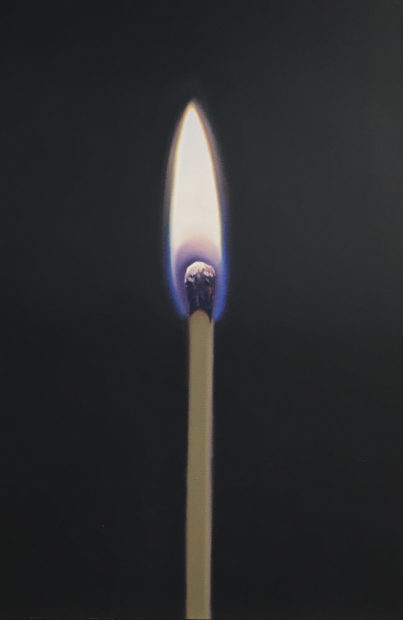 Hartley has taught drawing and painting at Tarrant County College for many years. Black Match is one of the paintings that he worked on in the classroom, as he teaches by example and paints alongside his students. In the history of art, representational art originated with cave paintings, and deliberative trompe l’oeil effects were achieved in still-life painting found in Pompeii. But even with its long history, today there’s a certain intolerance for realism in art that began after two world wars and the advent of Abstract Expressionism. Hartley says when he was in art school, he was pushed by his professors to adopt the big thick strokes of the abstract expressionists, but he rebelled.

Hartley’s paint handling varies so that he achieves unique effects in some works. For example, he uses a thinned transparent glaze that resembles watercolor on the painted red bralet tops of the young women in Aloha. While a few images in the show look as though some details are airbrushed, Hartley says that all of the paintings were done by hand using a paint brush. 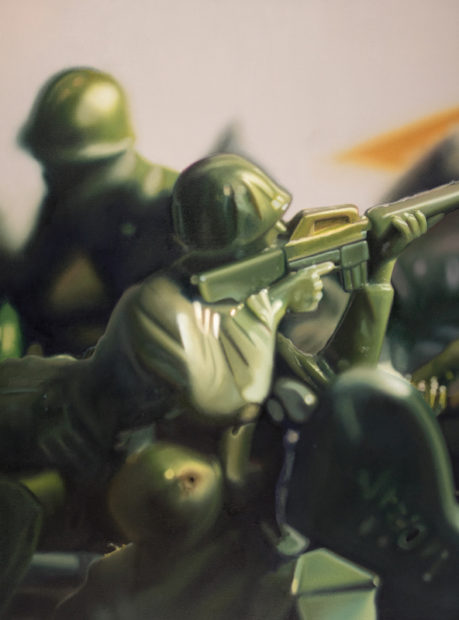 While Hartley can and does depict a nearly photographic likeness through alternating sharpness and blurred parts of the image, he says that “I enjoy painting both sharp and unfocused parts of an image, simulating the characteristics of photography. But I believe a painting translates the information differently.” 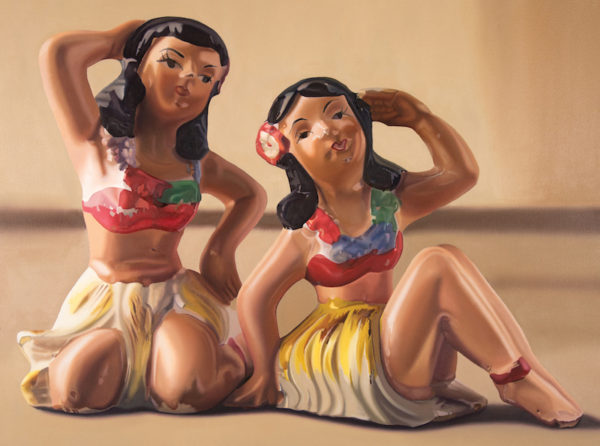 Juxtapositions of subjects are handled very effectively in the show. The Hawaiian girls in Aloha appear as alluring sirens to tempt the soldier boys in the adjacent Night Terrors and Sightline away from their deadly games. One couldn’t find a better example of gendered roles than this — the half-dressed exotic women contrasted with the green plastic uniformity of the soldiers, piled up like so much cordwood. 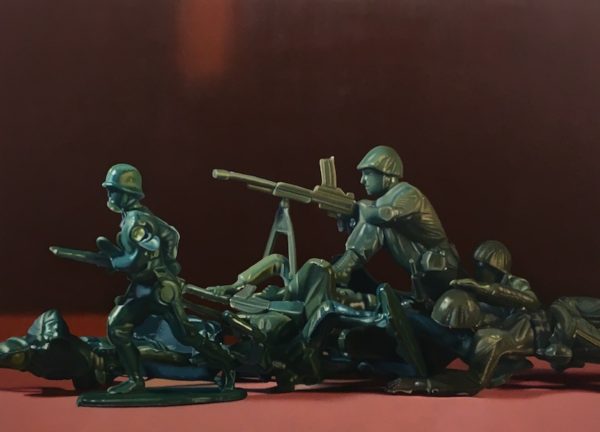 Hartley’s works have secondary meanings that are reinforced by the blank backgrounds; he’s not setting these objects in any particular time and space, so we’re not distracted by a tablecloth or a human interacting with the toys as toys. The clear purpose of his work is to trigger secondary meanings and evoke associated memories of the viewer. Some of these associative images may engender happy or sad memories of childhood, due to the ubiquitous nature of toys and the fact that we are raised in this society to be acquisitive. But many of the toys have a militaristic connection to aggression, or in the planes and motorcycles, a connection to speed. Some objects employ stereotyped depictions of the ‘other,’ and thereby reveal uncomfortable connections to cultural disphobia. In his Southern Living series, Hartley employs objects with racist underpinnings, such as the salt-and-pepper shakers designed to look like black domestic servants. 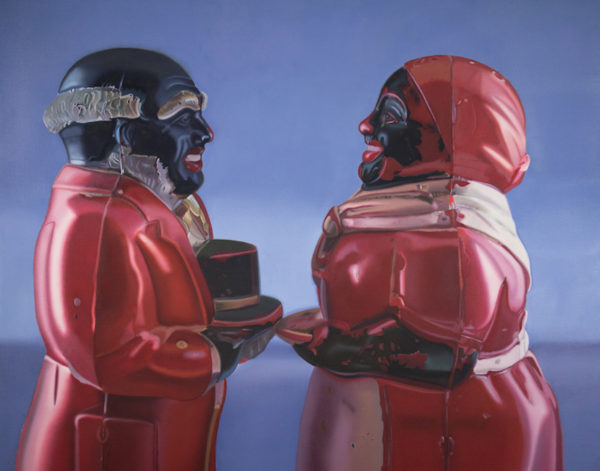 “I am extremely concerned about current intolerance for human relationships be they race, gender or sexual preference. Southern Heritage is a painting of Aunt Jemima and Uncle Moses salt and pepper shakers. My great grandma owned a set of these shakers and I never heard her say anything remotely racial, but these figures are images burned in my brain from early childhood.” 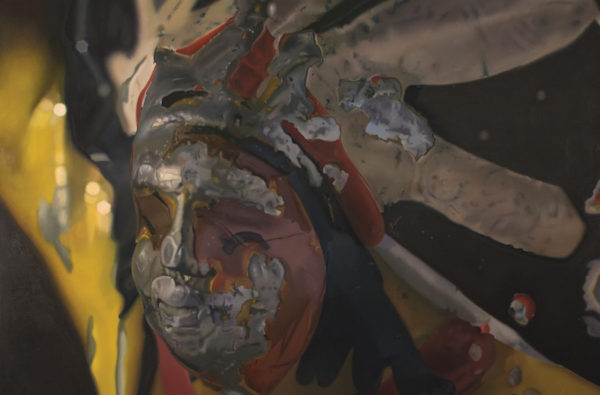 A stereotypical image of an Indian chief toy that has been previously depicted by Hartley has been repurposed in Make America Great Again. Hartley says, “I think of my toys as actors, just like kids do. The actors or toys may be typecast in a similar story or a character in a completely different role.” His previous painting based on the same toy was simply called Portrait of an Indian Chief, and in this recent iteration, Hartley has zoomed in and cropped the image to focus more on the face. It is probably one of the most abstract images in the exhibition, as the surface damage and the feathers of the headdress take on their own two-dimensional pattern that breaks down the impression of three-dimensionality. The irony should not escape us that the messenger is a stereotyped image representing the indigenous people who had their country stolen by European immigrants. 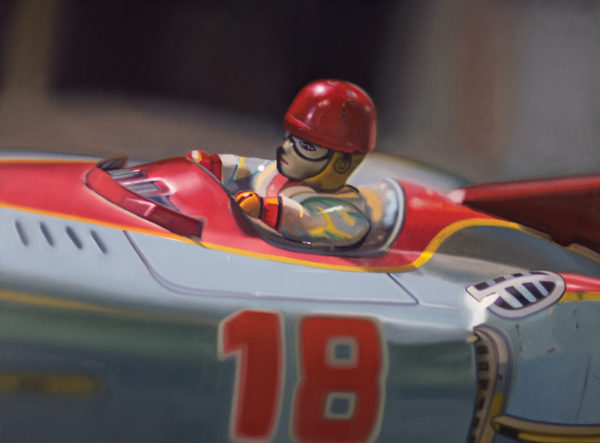 “The toy, motorcycle and cars paintings are a bit of a respite for me from the political and social flaws of our society. I think about the compositions like an abstractionist thinks about color and design,” writes Hartley. In Man of Steel, cropping, brilliant color and photographic realism all play a role in its effectiveness. 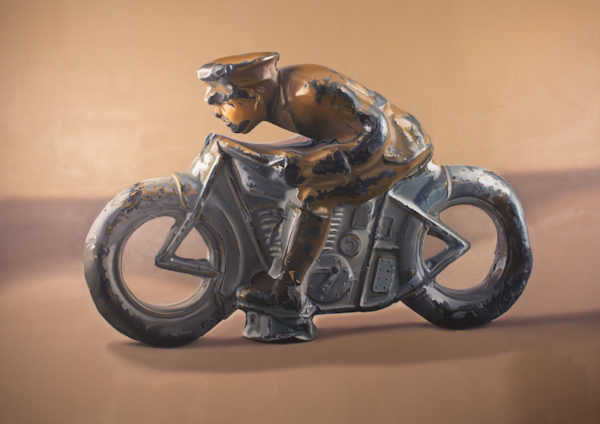 Lead Foot is one of the largest works in the exhibition. Hartley states: “These subjects are also a reflection of my past, growing up and spending time in my dad’s motorcycle shop and eventually owning and racing motorcycles myself. As a teen and young adult, I was always in the garage rebuilding engines and repainting my own and my friends’ cars and motorcycles.”

But, as pointed out earlier, there’s often political commentary lurking in his selection of objects. “Our constant 24-hour news cycle continues to provide me with fresh ideas for content. The subjects for my work include race, war, dysfunction of the Washington political environment, gun violence, caring for our military veterans, gender, etc.” 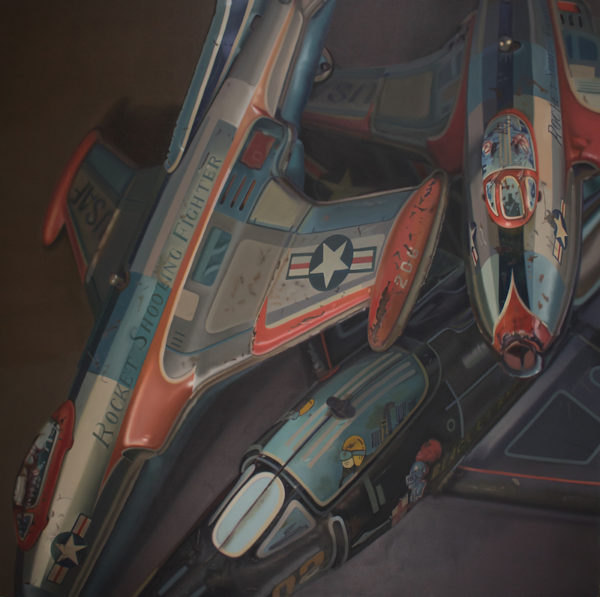 “One of the important paintings to me is Beware of the Military Industrial Complex,” says Hartley. “As an artist, I appreciate the forms, colors and engineering of a plane. But as a war pacifist, I suggest we all think about president Eisenhower’s warning to beware of the power of the military industrial complex. I highly respect and appreciate our veterans’ service and believe we do need to have the ability to protect our country, but I understand Eisenhower’s warning of profiting from war.” 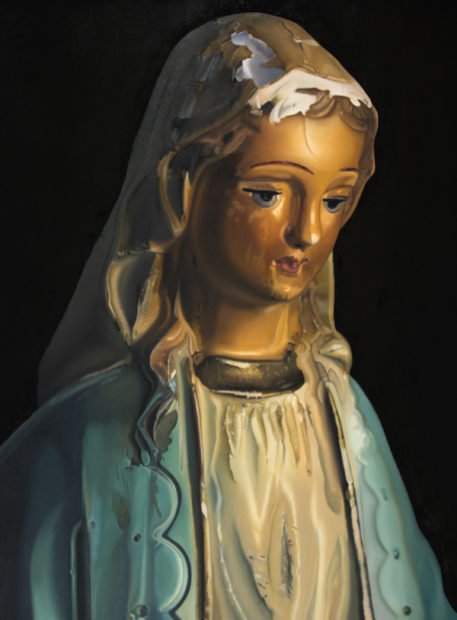 Some viewers today question the validity of realism and photorealism in painting, and see nothing more to a representational image than the mastery of technique. But there are some things that representational art often does more effectively than pure abstraction or conceptual art. The immediate comprehensibility of an image can still have the power to provoke and move us. The tumultuous events since the last election — the race-baiting and fear of ‘the other,’ the ominous threat of war — all are addressed in Hartley’s exhibition. In our speeded-up, chaotic society, representational art can still pack a significant punch.