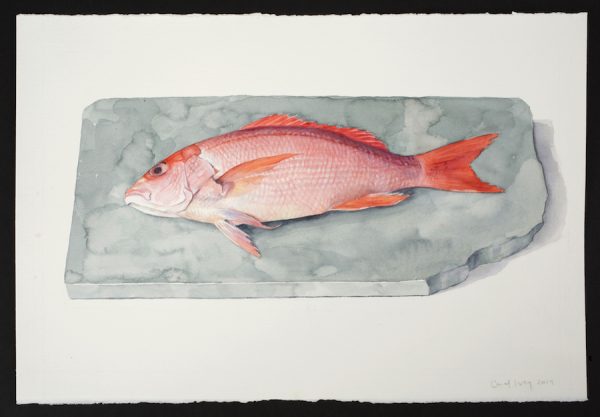 Artspace111 in Fort Worth currently hosts a varied group show featuring lush water-themed imagery by Carol Ivey, Madeline Irvine, and Deborah Mersky, paired with the contrasting arid landscape photography of Kristin Kirkley. Both shows’ underlying themes relate to ecological systems and the impact of humans on the the earth’s flora and fauna. 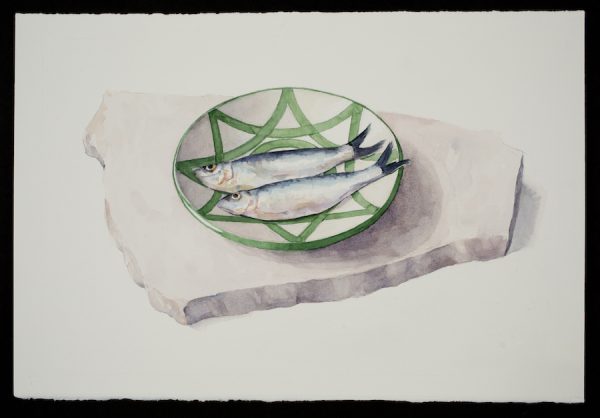 Carol Ivey leads off the water works with her impeccable watercolor technique, in a new series of carefully composed still-life paintings that feature fish as the dominant subject. Ivey captures the jewel-like hues of various fish in works such as Red Snapper (pictured at top) and Sardines on Spanish Plate, the latter title alluding to the commencement of the series while the artist was on a trip to Spain. The red snapper, like several other examples here, is laid on a simple gray marble slab that balances the warm red fish with the slab’s cool gray-green tonality. The watery blooms of pigment that form the image of the stone slab declare the use of a water-based media, but also evoke where the fish came from. 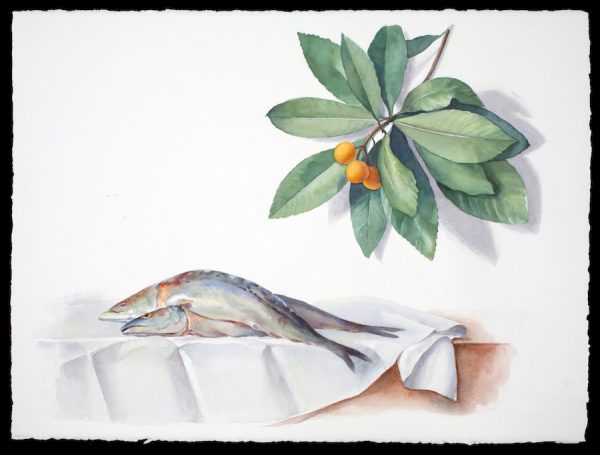 Ivey acknowledges being inspired by 17th- to 19th-century art-historical precedents, such as Monet’s Red Mullets, as well as the Kimbell Art Museum’s recent acquisition, Still Life with Mackerel by Anne Vallayer-Coster — that work is partially quoted in the title of one of Ivey’s paintings. “It’s the physicality, the light, the form, and just maybe a little bit of the badass element that lures me to the subject,” Ivey says. She describes her appreciation of the simple fish, and she shares that with earlier painters who, in their time, celebrated abundance and the overt display of wealth in their still-life compositions. “In contrast the fish I buy at the Vietnamese market exist in a different world,” Ivey states. “Will overfishing and climate change lead to extinction of species? Will fish, a world-wide staple, become an unaffordable luxury? Is there a disconnect in finding communion and celebration with painters of the past in painting fish today?” 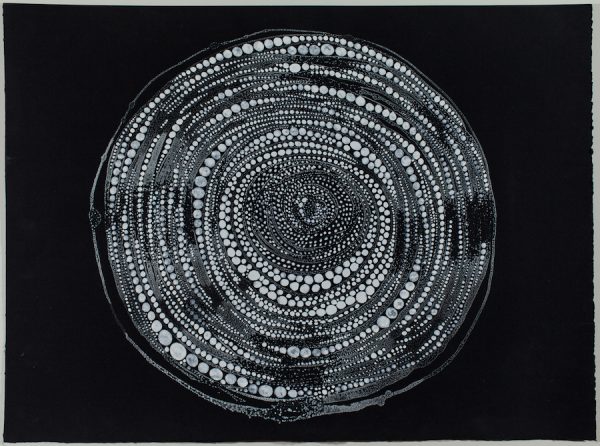 Madeline Irvine’s paintings on black paper are dramatically different in scale and subject matter from the smaller works in the room, but their strong linearity binds the show together. The unusual white of Irvine’s imagery derives from her application of a hyper-saturated sea salt solution that forms crystalline salt structures as it dries. Some areas become opaquely white with a thick layer of crystalized salt, and some become nearly transparent so the black paper shows through as traces of evaporated water are revealed by a white salt outline. The dried sea salt solution also leaves a glittery residue that can’t be captured fully in photographs. The subtleties in the contrasting transparencies and opacity of the salt crystals that create the sinuous forms are the most rewarding aspects of Irvine’s use of this media.

Madeline Irvine, Above and Below. Seasalt crystals on paper, 7.5 x 18′

Previously on view at the Fort Worth Community Arts Center, these organic works inspired by cypress roots and kelp forests feel more expansive in the main gallery at Artspace111. The two larger installations, titled Above and Below and Small Leap, are pieced together from square sections of paper to avoid damage to the fragile salt surface, a problem the artist encountered in earlier iterations of the work. The trailing forms appear continuous from one sheet to the next, effectively creating a larger organism. The works are a manifestation of Irvine’s ongoing interest in ocean and climate-change issues. More specifically, the current salt paintings reference the ecology of mangrove forests, “…one of the three buffer zones between ocean and shore. These fertile zones — coral reefs, giant kelp forests and mangrove forests — feed a huge percentage of marine life and protect our shores from the full force of the seas. Mangroves are extremely adaptive trees, and here I focus on their roots, which live undersea for half  [of] each day.” (This Irvine quote is excerpted from an Austin Art Talks podcast episode.) 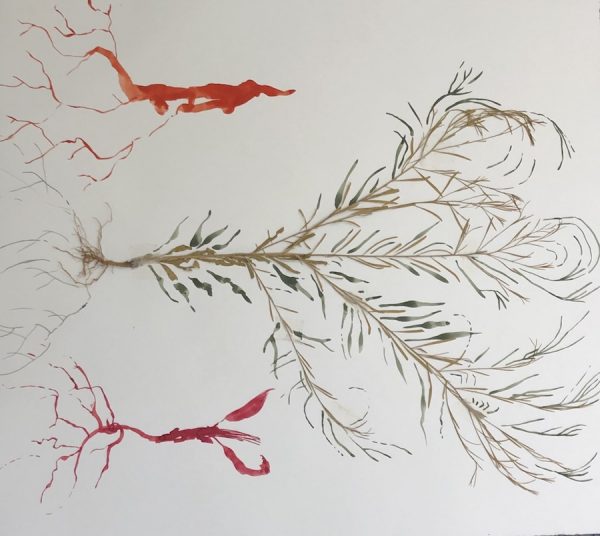 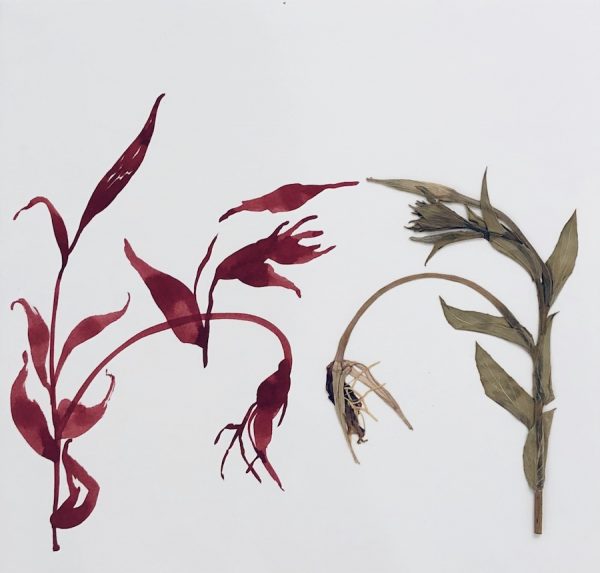 Deborah Mersky lives on “five wild acres” in central Texas’s Blanco County, close to the Pedernales River, and her artwork is inspired by plants and animals she finds on her property. Mersky’s primary media is printmaking, but for this show she was encouraged by the gallery owners to display examples of her daily practice of collecting plant specimens that are dried and included in journal entries. Mounted on a piece of paper, a “call and response” conversation develops between the actual plants and her watercolors of grass, leaves and other vegetal forms. Mersky makes her own inks from natural sources, including red ink (it predominates the watercolors) that she makes from ground-up cochineal bugs. The grouping of individual sheets from the Red Meadow and Big Red Meadow series adds to the conversation, as the plant forms relate to one another in a pleasing way in terms of color, linearity and the balance of positive and negative space. From an artist statement: “My imagination reworks what I see and study. I breathe in the plants and air… the tension of a world out of kilter… . Present always is an underlying eye toward the subtle chaos of nature’s demise at the hand of human greed.” The dependence of plant life on the availability of water, a scarce commodity in many our surrounding regions, ties this body of work into the watery theme of the exhibition. 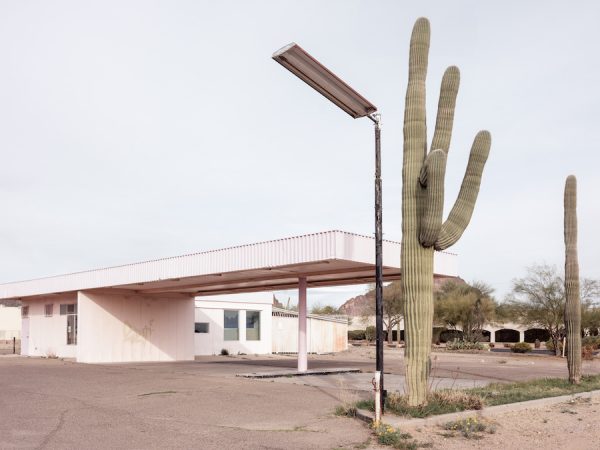 An adjacent gallery hosts the first solo show of photography by Kristin Kirkley to be held at at Artspace111 . The landscapes document West Texas, where Kirkley is from originally, as well as other southwestern locales. In her photographs, Kirkley captures the range of delicate earth colors and native flora in the arid landscapes. In this selection of work, she also demonstrates her affinity for capturing manmade spaces that have fallen into disuse, as in W Ajo Way. This image juxtaposes the vertical ribs of the tall saguaro cacti with the ridges of the metal exterior panels of an abandoned station; the soft pink color of the station plays well with the green cactus. The cactus, planted as a landscaping element, stoically hangs on while the structure it once enhanced disintegrates.

Settling In: A Studio Visit with Michelle Cortez...

Saguaro do not grow in Texas. This photo by Kristin Kirkley must have been taken else where.