This weekend the New York Times published an article questioning whether mug shots taken at the time of an arrest should be made public. There are good reasons both pro and con.

Interestingly, there are not many artists who’ve made art using mug shots, though of course more than a few appear in real mug shots from their arrests. True, the artist Ben Durham just had a show at Lora Reynolds Gallery of mug shot-inspired portraits, but Durham dances around his images’ gritty origins: you wouldn’t know these pretty drawings were mug shots necessarily without being told. And in 2015, the artist EJ Brown did a series of mug shot-inspired photographs of his friends wearing their graduation caps and gowns, as a commentary on racial profiling of African-American men.

A cursory round up of the usual suspects who might conceivably have made art using mug shots (Richard Prince, Raymond Pettibon) reveals nothing by those guys. I suspect few artists have made work from mug shots because it’s hard to beat Andy Warhol’s seminal 1964 series on the subject, Most Wanted Men.

The Queens Museum mounted an exhibition about this series in 2014, on its 50th anniversary:

50 years have passed since an up-and-coming Pop provocateur named Andy Warhol sparked a minor scandal at the 1964 New York World’s Fair. As part of a prominent set of public commissions for the Philip Johnson-designed New York State Pavilion’s exterior, Warhol chose to enlarge mug shots from a NYPD booklet featuring the 13 most wanted criminals of 1962. Forming a chessboard of front and profile views, 13 Most Wanted Men was installed by April 15, 1964, and painted over by Fair officials’ direction with silver paint a few days later. When the Fair opened to the public, all that was visible was a large silver square. 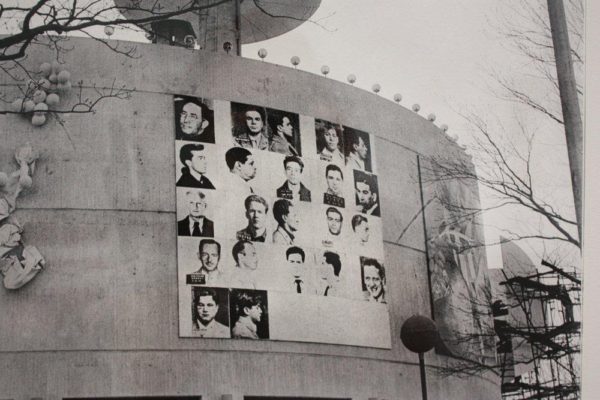 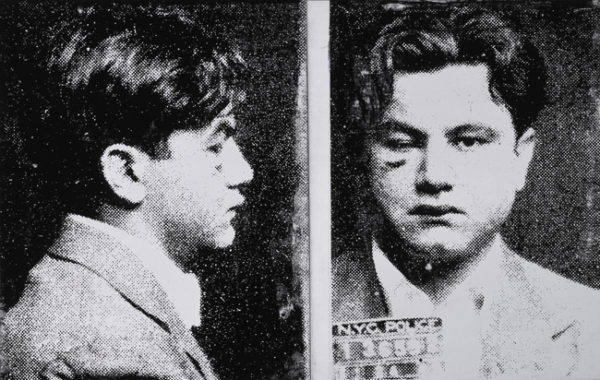 This photograph of the golfer Tiger Woods from his arrest last month for driving under the influence of painkillers inspired the New York Times article mentioned at the outset of this post. Whether one feels sympathy or schadenfreude for Woods, this image is a somber reminder that our country’s appalling epidemic of prescription drug addiction has no respect for wealth, celebrity or achievement — any more than our grisly fascination with mug shots does. 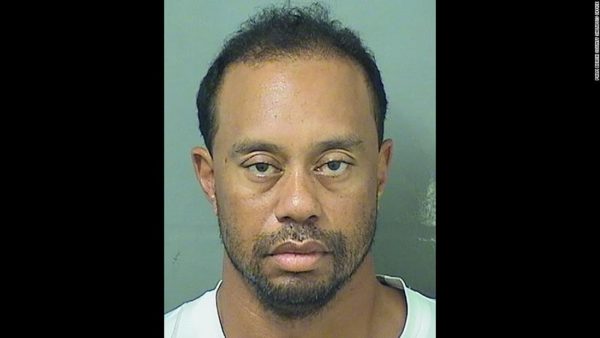 There was a show at the Houston Center for Photography in 2015 by Amy Elkins called Black is the Day, Black is the Night that used them. One wall was the series Parting Words, black-and-white mug shots of men and women who have been executed, the photographs made up of their final words. The whole show was so beautiful and sad, one of my favorites I’ve seen.

Since I have a facsimile poster for Marcel Duchamp’s 1963 retrospective at the Pasadena Art Museum hanging on my wall, it didn’t take much delving for me to point out this artist as the likely progenitor of mug shot art. The original “Wanted: $2,000 Reward” (1922) featured front and profile “mug shots” of Duchamp’s face printed on a gag tabloid such as those found at amusement park midways. In October 1963 at Duchamp’s direction, curator Walter Hopps prominently inserted the “Wanted” art within the Pasadena poster, against an olive green background. Since Andy Warhol attended the opening of this exhibition only months earlier, it is reasonable to infer that Duchamp’s “Wanted” was one direct inspiration for Warhol’s “Thirteen Most Wanted Men” (1964). Duchamp’s posters are reproduced here: http://www.toutfait.com/issues/issue_3/Articles/alfaro/alfaro.html