The Singularity of his Absence 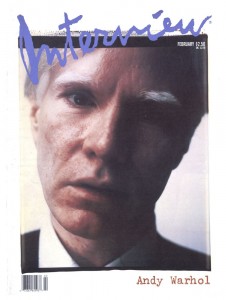 Statements made by artists are often regarded as the key to understanding their work. Art critics look to artists to set the theoretical framework surrounding their art; art historians use artists talking about other artists to establish chains of influences or schools of artmaking; and exhibitions use artist quotes on introductory labels or videos of artists speaking about their work as an integral part of presenting the artwork itself. But what is at stake when we ask artists to take on the role of author, not only of their artwork, but also of the concepts surrounding their art?

The artist interview is a good place to start examining this question as it is both a common format and incredibly complex when it comes to issues of authorship. Many quotes attributed to artists come from artists’ interviews, and when this is the case, authorship is performed in at least three different ways. First, artists likely present themselves through the interview as the origin of their artwork and the ways in which that artwork can be understood. Second, the interviewer projects their own ideas onto the artist in the questions they ask and their editing of the interview. Third, the essayist that excerpts a quote from the interview writes their own version of the artist in the way they appropriate and interpret their words. In each of these instances, the authority, identity, and authenticity of the various authors are at stake, and in the simple act of excerpting a quote from an artist’s interview, these power struggles become entangled.

Andy Warhol’s interviews are a especially charged example through which one can start to get at the complex struggles behind the artist’s quotes. Warhol was exceptionally interested in the format of the interview, participating in hundreds through the course of his career both as interviewer and interviewee, most famously in his magazine Interview and television show on MTV, Andy Warhol’s TV. Endlessly quotable, some of Warhol’s best-known pronouncements such as “I think everybody should be a machine” and “In the future, everyone will be world famous for fifteen minutes” come from interviews with the artist. Even as his words became widespread and commonly held up as the foremost expression of his philosophy, Warhol developed a remarkably consistent method for giving interviews that simultaneously called into question the ability of this format to get at the meaning of his life and his art.

Even in the earliest interview in Kenneth Goldsmith’s I’ll Be Your Mirror: The Selected Andy Warhol Interviews (2004), Warhol sets the terms of his responses. He agreed to do this first interview in 1962, just as his career was taking off, only if he could answer the interviewer’s questions with a “yes” or “no.” The interview begins (Goldsmith, 4):

Question: What is Pop Art?

Question: Is Pop Art a satiric comment on American life?

There is no illusion of expressiveness in Warhol’s answers that would allow us to believe that we can understand his feelings or inner psychology. Yet, his responses are witty and pithy to the extreme. For instance, “Yes” does seem like a fitting and poetic answer to the question “What is Pop Art?” You can start to read much more into Warhol’s replies than what he is actually saying, and thus find that his replies also read into us.

Continuing on in the same interview, Warhol breaks his yes/no format to offer some short answers that seem lengthy in comparison to his previous one word replies (Goldsmith, 5):

Question: Do billboards influence you?

Answer: I think they are beautiful.

His terse responses here seem to indicate the thoughts and feelings of the artist’s inner life; but given the way he began the interview, it is hard to take him seriously. His sentiments of love and beauty take on an ironic tone as he claims to love everything. The feelings he attests to are so generally stated that they do not seem to belong to him as a person, but rather his persona as an artist or as the pop artist the interviewer asks him to embody. As Michel Foucault might say, it is at this moment that Warhol takes on the “author-function,” or a socially-constructed position of privilege wherein one is identified as the origin of a work (Rabinow, The Foucault Reader, 107-108). For Foucault, authorship is a sort of process of evasion whereby the ways one functions as an author are distinct and separate from oneself as a person. “It would be wrong to equate the author with the real writer as to equate him with the fictitious speaker; the author-function is carried out and operates in the scission itself, in this division and this distance” (Rabinow 112).

However, just as this distance between the reality and self-creation of the author is where the idea of authorship truly functions, it can also be the means of the author’s disappearance in contemporary writing, according to Foucault (Rabinow 102). Foucault describes it in saying, “Using all the contrivances that he sets up between himself and what he writes, the writing subject cancels out the signs of his particular individuality. As a result, the mark of the writer is reduced to nothing more than the singularity of his absence” (Rabinow 102-103). Foucault’s assessment of the contemporary author-function applies very well to Warhol’s style of giving interviews and the complexities it unveils. Although the cracks in Warhol’s authorship may be implied in written interviews such as the one quoted above, the gaps and disappearances in the construction of his persona as author can be seen more clearly in recordings of his interviews, which show Warhol as author to a fuller extent. More on films of Warhol’s interviews in the next post in this series where I will delve more into the idea of Warhol as artist and author.

About authorship of interviews: you forgot the fourth mediating factor, the editor. The “editor” (which given the variety of ways an interview is impacted may consist of several people) selects or approves the subject (the gatekeeper function), transcribes the interview (sometimes, and this is a task usually assigned to low-level editorial personnel because it is tedious as hell), and edits the interview (with a heavy hand or light). The words printed on the page may be quite different than the spoken words. In my experience, editors feel free to at the very least smooth out repetitive language by either the interviewer or the interviewee. Editors often change the interviewer’s questions ex post facto. Editors chose pull-quotes, decide what to lead with, and decide headlines and cover copy, setting the tone for the interview before the reader has actually read a word of it. And perhaps most important, editors cut the interview–often quite drastically. The reader will generally never know what got left out. The existence of the interview and tone of the interview are the products of editorial decisions.

I guess I was conflating the role of the author with that of the editor. When I conduct interview, I am usually the one who edits the questions and responses in consultation with the person being interviewed. But you are right, my editors do choose where the interview will appear when published and what sections to highlight . . . An additional role to consider.

I have never had an editor cut parts of an interview without consulting me and the person being interviewed first. That can indeed distort the intentions of the interviewer and interviewee. But I am thinking more about what gets left out in interviews. More on that in my next post.