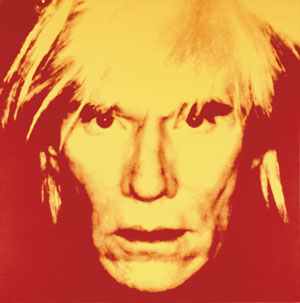 Turning fifty can provoke people to do unpredictable things, as it did Andy Warhol in 1978. Following his sixteen-year reign as the Prince of Pop, Warhol made an unexpected about-face and decided to try his hand at abstract painting. One of his first forays into the non-figurative netherworld is a series known as the Oxidation Paintings (or “Piss Paintings”), two of which are on display through May 16 at the Modern Art Museum of Fort Worth in the exhibition Andy Warhol: The Last Decade. Organized by the Milwaukee Art Museum, The Last Decade is the first museum show to focus specifically on Warhol’s output in his final ten years. Since most of the work has not been widely exhibited, there are a number of surprises in this show.

You’d never guess that the two alluring paintings near the beginning of the exhibition were made with urine unless you took the time to study the exhibition labels. What makes Warhol’s piss paintings so beguiling is not so much the manner in which they were produced, but rather the resulting ephemeral radiance of their shimmering surfaces, reminiscent of the Color Field paintings of Jules Olitski and Helen Frankenthaler. No less subversive are the Shadows paintings, created by screen-printing photographs of ambiguous shadows onto six-foot tall canvases that had been thickly mopped with a ground of color. The four Shadows paintings exhibited here are part of the original 102 in the series which were first shown in 1979, butted against one another, resembling a continuous mural. Warhol flippantly referred to them as “disco decor”.

The signature screen print process he perfected for his trademark celebrity and society portraits is employed in the Egg and Gun series from the early 1980s, but for his almost unknown Yarn series, created for a commission from an Italian yarn manufacturer in 1983, Warhol designed colorful squiggly whimsies in obvious homage to Pollack’s drip paintings. 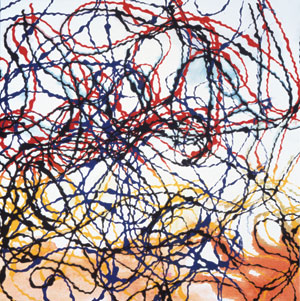 The captivating Rorschach paintings are massive in scale and required a crew to produce them. Measuring 14 feet in height, the monochromatic paintings were achieved by pouring paint onto one side of the canvas, then folding the canvas down the middle and pressing the two sides together. Warhol worked on this series for a year, allowing chance to determine the end results. The imposing paintings were never shown until after Warhol’s death.

Always on the prowl for inspiration, Warhol adopted camouflage as a loaded graphic vehicle for his final adventure in abstraction in 1986. Using a palette not normally associated with camouflage, one including colors like mauve and pink, Warhol stretched and turned the camo motif inside out and onto canvases as large as thirty feet. He became so fascinated with the endless variations and possibilities of camouflage iconography that he even added it as an incongruous overlay to some of his other series.

Even while tackling abstraction, Warhol continued to crank out his highly successful portrait commissions and other figurative series, including his self-portraits. Nine self-portraits from 1978 are hung on a gallery wall covered in Self-Portrait Wallpaper, 1978. Of the four 1986 fright-wig self portraits included in this show, the most noteworthy is the giant nine-foot square, green one from the Modern’s own permanent collection. It is believed to be one of only five produced in this large format and haunting pose. 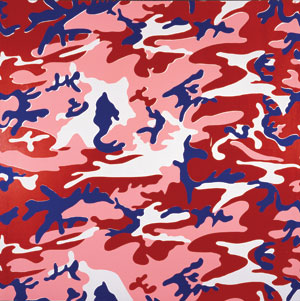 In spite of his commercial success, Warhol was a provocateur at heart and strived to stay in the vanguard. As the young Neo-Expressionists of the early 1980s cannon-balled onto the New York art scene, Warhol befriended Jean-Michel Basquiat. He had first met Basquiat years earlier when the young artist was selling his t-shirts on the street. By the time the two met again in 1982, Basquiat had been given the nod by the art cognoscente and was exhibiting his paintings in blue chip galleries. Warhol and Basquiat made for an unlikely pair, but they immediately started spending time together, painting each other’s portraits, working out together, nightclubbing and working collaboratively on almost one hundred paintings, three of which are in this show. Art historians credit this liaison as inspiring Warhol to pick up his paintbrush again, and it led to further collaborations that also included Francesco Clemente.

Warhol’s considerable skills as a draftsman are prominent in a series of freehand black and white paintings, such as the 1985 Mount Vesuvius, and nine small canvases of fake commercial ads.

As much as Warhol pursued new ideas, he never stopped referencing his earlier work as seen in two paintings which are, in my opinion, the standouts in the Modern’s spaciously installed show.  The placid white on white Mona Lisa, c. 1979, 15 Mona Lisas stacked into an almost nine-foot canvas, is Warhol at his most elegant and classic. The black on black Marilyn (4), c. 1978, tucked in the middle of the exhibition, is utterly dazzling in its quiet simplicity. Walk from one side of this canvas to the other and you will see the Marilyn image shift from positive to negative and back again. I don’t know what to attribute this eerie special effect to, but it’s exciting to experience and the only painting in the show that does it.

In Warhol’s final epic series, The Last Supper, he comes out of the Catholic closet. A devoutly religious man who kept private his life-long spirituality and church-going habit, Warhol created more than 100 screen prints and paintings in 1986 for his Last Supper oeuvre. He undertook the series initially as a commission for the inaugural exhibit at Alexander Iolas’ new Milan gallery–a  space located across the street from the site of Leonardo di Vinci’s masterpiece fresco, The Last Supper. Christ, Warhol’s ultimate celebrity, proved to be a subject who held Warhol’s interest as he continued to add to the series even after he had shipped off his show to Iolas. The Last Supper, 1986, brings full circle a summation of some of Warhol’s best known images, while the enormous, mustard-colored 32-foot canvas Detail of the Last Supper (Christ 112 Times), 1986, makes for a strong finish to the series.

No Warhol exhibition is complete without a nod to his long-standing fascination with the world of celebrity. Along one wall at the beginning of the exhibition is a group of his black and white photographs featuring a pantheon of stars, from John and Yoko to Georgia O’Keefe and Liberace, proof that in large measure we have Warhol to thank for fueling the celebrity-obsessed vortex we endure today.

At the end of The Last Decade are videotape excerpts from Warhol’s 1980s television series, a welcome relief and interesting diversion from all the static 2-D in the previous galleries.

Auction prices for Warhol’s early work recently broke the $100 million mark, but record prices don’t translate into universal acceptance. There are still art world factions who look down their noses at the artist, viewing his work as anti-intellectual and simple to the point of superficiality. But Warhol stuck close to his Pop guns and his creative fires never subsided. After abandoning his graphics career in 1961, he created more than 10,000 works of art. What is striking about the work in The Last Decade is Warhol’s command of a wide range of media and the scope of his musings. His last ten years turned out to be his most productive and arguably his most interesting.

Andy Warhol: The Last Decade
Modern Art Museum of Fort Worth
February 14 through May 16, 2010

Christina Patoski is a journalist and photographer who lives in Fort
Worth.  A former NPR reporter, she has been published in Newsweek
Magazine, The New York Times, Life Magazine, and
USA Today.  Her photographs have been exhibited in museums and
galleries throughout the United States, including the Smithsonian’s Museum of American
History.  She received a National Endowment for the Arts fellowship
grant for her video and performance art which was shown at the Whitney Museum of American Art,
the Walker
Art Center and the San
Francisco Museum of Modern Art.

Also by the author:

If you find yourself in the desert needing a break from minimalism or want to make a pilgrimage WEST for something other than Judd then there is a large collection of beautifully installed works from The Last Supper in Marfa, presented by the Ayn Foundation.