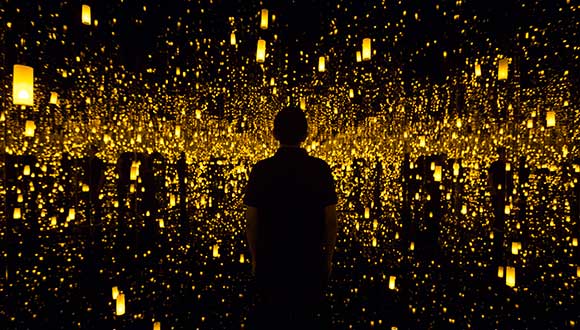 In the past few years, Texas cities have been attracting wide-eyed art visitors with their various Yayoi Kusama shows and installations. The Museum of Fine Arts, Houston and the Dallas Museum of Art/Rachofsky Collection have even purchased some of the artist’s infinity rooms: the MFAH bought the 2009 mirrored environment Aftermath of Obliteration of Eternity, and the DMA and the Rachofsky Collection jointly purchased the artist’s 2016 room titled All the Eternal Love I Have for the Pumpkins.

Now, the McNay Art Museum in San Antonio is gearing up to present Immersed: Local to Global Art Sensations, an exhibition looking at four artists who create immersive environments: Yayoi Kusama, Chris Sauter, Andy Warhol, and Philip Worthington. The show will include Kusama’s Aftermath of Obliteration of Eternity, Worthington’s Shadow Monsters (which was shown at the MFAH in 2015), Andy Warhol’s film Sunset (which was shown at the Menil Collection in 2016), and a new installation created by San Antonio artist Chris Sauter.

Since the show is comprised of interactive works that accommodate only a few visitors at a time, the museum is requiring advanced reservations and timed tickets for attendees. Public tickets for the show go on sale May 7th. The exhibition will run from June 7 to September 2, 2018. For more details, go here.