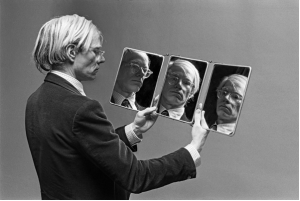 In his written interviews, Warhol often ceded control completely to the interviewer. A prominent example of this is his most quoted interview, Gretchen Berg’s 1966 text “Andy Warhol: My True Story.” It’s popularity may be due in part to its exceptional coherence. Berg edited her questions out and wrote the whole thing as one, long meditation and stream of consciousness. In one section, Warhol describes his feelings about interviews:

It’s not that I don’t like to speak about myself, it’s that there really isn’t anything to say about me. I don’t talk very much or say very much in interviews; I’m not really saying anything now. If you want to know all about Andy Warhol, just look at the surface: of my paintings and films and me, and there I am. There’s nothing behind it. I don’t feel my position as an accepted artist is precarious in any way, the changing trends in art don’t frighten me, it really just doesn’t make any difference; if you feel you have nothing to lose, then there is nothing to be afraid of and I have nothing to lose.

At the end of this excerpt, Warhol denies any vulnerability. But it is hard to tell whether he is telling the truth at this point, he is just in denial, or we are hearing Berg’s perspective. The tone of this interview is unique amongst Warhol’s interviews. He comes across as remarkably sincere and real, which makes me question how much of this interview, which Berg admits to having written partly from memory, was her own invention. 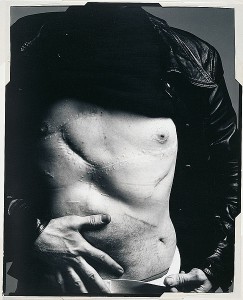 As Hal Foster writes in his essay “Death in America,” we make the Warhol we need or get the Warhol we deserve. In fact, the cumulative effect of reading Kenneth Goldsmith’s book of Warhol interviews is confusion as to who Warhol actually was. As the book’s title implies, one mostly ends up seeing oneself reflected in whatever position one takes on the artist. For instance, I like to see him as a theoretical thinker, cool, ironic, and anti-establishment. However, I have read enough about Warhol to know that I could come up with just as much evidence that he was an idiot savant, painfully self-conscious, and politically conservative. Perhaps this is not as odd as it might seem. For don’t we all contain contradictions or multitudes? Yet it is still remarkable that Warhol’s interviews contain such far-ranging commentary and opinions almost in spite of his evasive techniques.

It gives me pause when I think of extracting a quote from Warhol for my own writings. Take for example, Foster’s interpretation of a quote from the Berg interview:

In the context of the Berg interview, the same quote from Warhol has a similar meaning but a very different tone:

Given Warhol’s evasive interview techniques, it would seem ridiculous to question which author had the most real or authentic interpretation of Warhol, Foster or Berg. Yet to some extent, all writers seek to put into words a perspective on an artist that is true to who they are and what they are about. This is the reason to come back to the artist’s quote, to hear from the artist directly what they think. 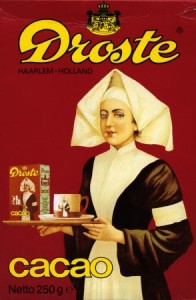 There is something uncanny about quoting Warhol. More than with any other artist, I hesitate to extrapolate a quote, not necessarily because I question the authenticity of his interviews, but rather, in quoting them, I feel myself implicated in a ruse. More than that, I feel exposed, like someone is looking at me looking at an interviewer looking at Warhol. It is almost like the Droste effect of holding a mirror up to a mirror. Or as Warhol once said:

People are always calling me a mirror and if a mirror looks into a mirror what is there to see?