by Sebastien Boncy May 5, 2012
FacebookTwitterEmail

Tumbleweeds
We don’t have New York’s density, or Chicago’s architecture, or Los Angeles’ mythologized spaces. We don’t have San Francisco’s prices, Aspen’s lack of oxygen, Austin’s lack of pigment, and San Diego’s pact with the weather gods. We should not understand as deficiencies what is simply not part of the city’s make-up.  This sprawling, congested mess of a science-fiction concept is what it is, but that doesn’t mean we don’t deserve vibrant street art, something weird and true and beautiful. If we keep ignoring the city’s DNA, that’s just never going to happen.

I’ve been walking (Really. With my feet) these streets for fifteen years and I’ve seen my share of talent, I’ve seen some great examples of graffiti. Skills to spare. And yet, I’ve seen very little that is effective that makes sense in the context of this city.  Most of the stuff out there is right in the lineage of the spray and paste-up traditions born in walking cities.  The big problem is that nobody’s walking.  I have two reasons for being in the streets: long walks are a habit from small times, and I’m busy making photographs.  Most people don’t have half a reason, and so it’s lonely out there. Really lonely. Are you familiar with the second scene from Werckmeister Harmonies? It’s like that all the time.

There is a significant amount of street art out there beyond these unpopulated sidewalks. It demands to be scrutinized, it wants your time, it is so very retinal. Who is it for? What is it doing here? Why does it feel like tourists made it?

MPH
Duchamp, when sharing his enthusiasm for Warhol’s painting, called it post-retinal: art that did not require a long, loving look at the skills and details in evidence.  See it, get the point, move on. Fast art for fast times.  That does not cover all of Warhol, he was not an all-eggs-one-basket cat, but that is enough of Warhol to be instructive.  It’s definitely Elvis Warhol, or piss paintings Warhol. The idea of the post-retinal is the first step toward making sense of this town as canvas. 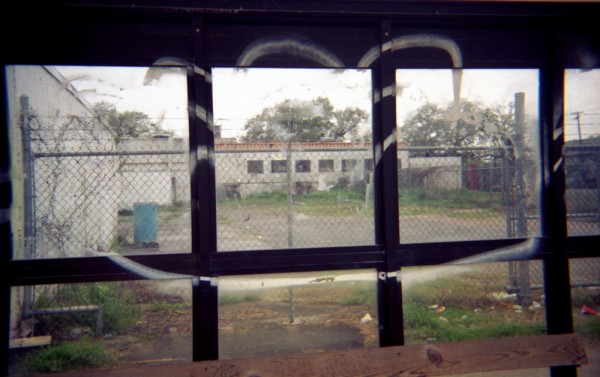 This is a thing

This makes sense. This is from a decade ago. I was on the bus, I saw it, it changed my mood.  Effective.  It’s simple, some might say crude, but it’s also very convincing.  It’s a robust depiction of clichéd subject matter in an unexpected context.  It comments on the object it uses as support, the landscape surrounding it, and the bus that serves as vantage point. It’s a treat that manages to be brusque and wistful at the same time.  This piece only demands a few seconds, and here I am a decade later still thinking about it. 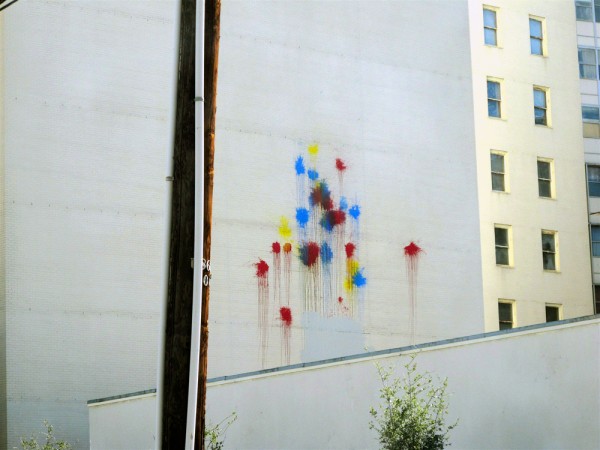 Butter on a stick

This is from a couple of months ago. Post-retinal butter on a stick. I saw it from the passenger seat, driving through downtown. Once more, only seconds are needed to take in this bright rupture in the space-time continuum. One look and you have a pretty good idea how it was made. As you are taking in that visual break with the dull aesthetic of yet another Downtown building, you are also processing the bratty action that made it possible. My day brightened as I saw it, I felt a twitch in my muscles that let me know how easy it would be to be part of the vandalism.  I hadn’t felt that sort of adolescent rush since the first Twilight.

Such examples remain rare and singular. I wish I had pictures to share with you the wonders of fire hydrants dressed in Lacoste (circa 2003) or the Twombly-like mural of poop smears (2005?) next to Mai’s. I have no idea who made any of this. Were they artists? You’re right, stupid question. 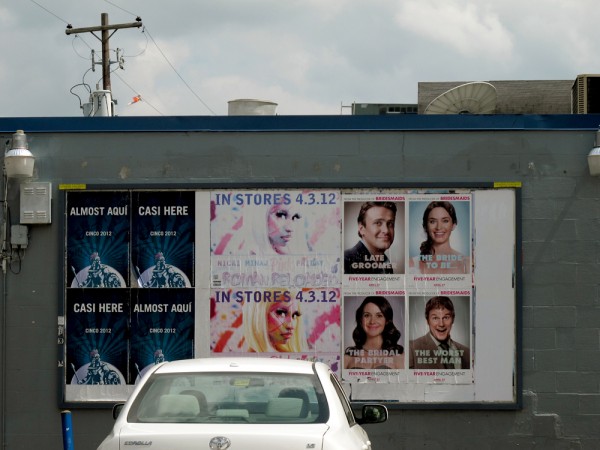 This could be something.

One last example. And this one’s definitely not art. This is advertising.  Is there a reason that this grid approach is only being used by people selling us stuff? Look at it; it’s an Aztec warrior (4 times), Ms Minaj looking fierce (faded+popping colors), and some smiling white folk (cult leaders).  That’s quite the collision of information, and I’m not saying that it’s a meaningful accumulation, but with a little tweaking it could be.  With a bit of intelligence imagine what one could do with this kind of modulated density and repetition. If you pay attention, the world does the heavy lifting for you.

There is so much work to be done. Put down that down that VHS copy of Beat Street and get to it.

This is a thing, but what is it? The photo is captioned “bus cloud.” It looks like a partially erased tag on a bus shelter? Post-retinal is right! The cloud, and the poetry of it, is in your mind, Sebastien, not the tagger’s.

I am with you on your enthusiasm for the work you lovingly call “butter on a stick” , but am I really supposed to just let that Twilight reference slide????!

That movie’s hard to defend, ain’t it? And yet, by the end of it, I was transformed into a quivering 13 year old girl. I gotta respect that kind of experience.

Yeah, but he referenced a Béla Tarr film to balance it out, so I’m good.

Bill, I think you managed more assumptions in two lines than are contained in my entire post.

That was a very Bro thing of me to say. Allow me to answer from my other brain. This post was all about potential and effect, not about intent. All in my mind? Possible. I made no claims for the producer.

But, Sebastien, you talk about the piece in terms of intent! “Effective. It’s simple, some might say crude, but it’s also very convincing.” The term “effective”, implies an artist who was trying to create the feelings you experienced, in this case effectively. Likewise, “convincing” implies that you are being convinced by an argument or statement the artist is purposefully making to convince you.

These kinds of terms are common in crit rooms and art reviews, where artist’s intention (at least of making art!)is assumed. Critical discussions of sunsets, clouds, cracks in the sidewalk and half-effaced grafitti need a different set of terms.

As you say, intention isn’t necessary, so it would be more true to the facts to simply say that the tag, (or what was left of it) affected you as you describe, without calling it effective or convincing; just brusque, wistful, evocative, etc.

Sorry to quibble over words- I’m a big fan of quasi-intentional street art myself; it just seemed to me as if you believed some mad genius tagger had painted the bus shelter with puffy cloudlike letters in white paint, then scraped away much of his own tag. (Which would be amazing, but I doubt it happened that way.) Or is this a photo of something painted on a bus window, and we’re seeing the shelter through the tag? I can’t tell from the photo.

I still say it’s effective and convincing as a solution for street art in a car city. I have no problem separating those from intent. It’s the Viagra paradigm: heart medicine makes for effective boner pill.

The first image can be tricky. It was shot with a plastic lens, through a moving bus’ window, but I thought it was clear enough that it is a cloud and not letters. The image was painted on the shelter, it was mostly there. I don’t think the author scraped any of it off, though that is a possibility. If you’ve ever spent an hour or more waiting for the 53, then you might have some insight into why this is abraded. It ain’t in it’s original state, but neither is most of the olden stuff that populates museum.

As a close follower of the graffiti scene in Dallas, I thoroughly enjoyed this post. You captured the heroism typically associated with “clouds” among writers. The simplicity in design is telling of the writer’s sense of aesthetic and perspective. Before fading the outline serve as a reflective base where the shirt you were wearing that day colored in outline. As the bus travels through the city, what other tags does this cloud capture? His moving tag serves to burn all the other tags caught in frame — which is pretty genius if you ask me. I forwarded your article to a few members of an underground collective who let me know the cloud is “dope” and that you illustrated through words an under recognized reason they keep on keepin’ on.