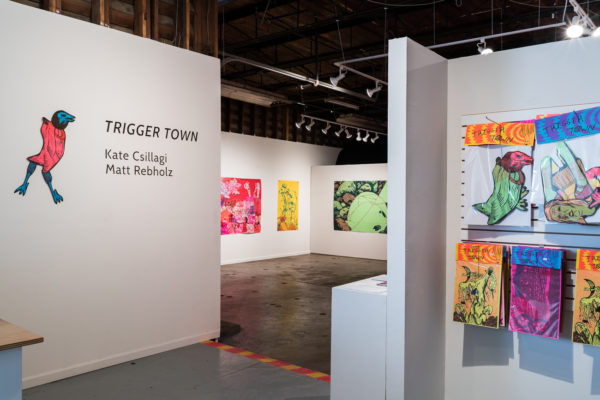 In the two-person show Trigger Town by Kate Csillagi and Matt Rebholz at ICOSA Collective in Austin, the work is made by two relatively modern technologies—laser printing and Risograph. Laser printing is an electrostatic method of printing, similar to Xerox, that first came to market in the mid-’70s. Unlike Xerox, the image is completely digital.

The Risograph is a much more recent invention—it was invented in 1986. It combines digital technology with a mimeograph-like stencil, which is made from a digital image. It can produce reproductions very quickly and inexpensively and it’s useful for printing duotone images or images with a spot color. (Think of them as high-speed digital silk-screen printers.) Risograph has a particular look to it—it is favored by many zine publishers and small-press comics artists. Houston cartoonist Sarah Welch publishes her comics on a Risograph, as does Galveston zinester Dan Schmahl. 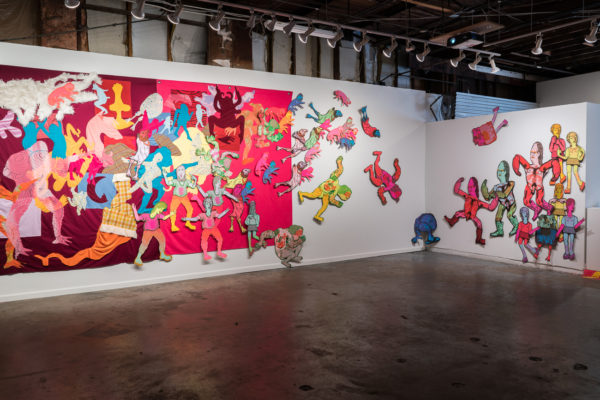 But I haven’t seen these technologies used for printmaking in the same way that artists use lithographs, etching or silk-screen. Csillagi and Rebholz have stretched the laser and Risograph techniques in interesting ways. Their work started with drawing—the pair of them got together and drew collaboratively in the sense of exquisite corpses. Many of these individual drawings are on display in a separate room illuminated by a fluorescent light. 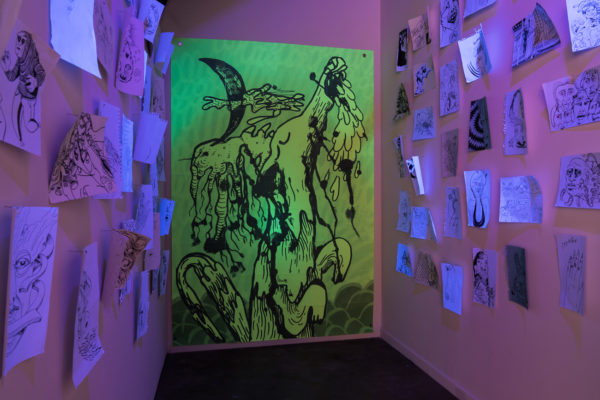 The two artists have cartoony drawing styles. Csillagi’s style places her work within the universe of contemporary art comics, and Rebholz’s drawing is not exactly mainstream, but is very tight. His remind me a bit of the art of the more far-out contemporary Image Comics artists—not like “mainstream” comics, but not quite underground. He has produced a lengthy comic-book epic called The Astronomer, which is not a great read but has excellent artwork. And while the pair might come out of a comics aesthetic, they aren’t really storytellers. It’s better to think of them as image-makers, and to see Trigger Town as a collection of arresting images. There might be narratives buried in them, but the narratives are not really accessible to the viewer. 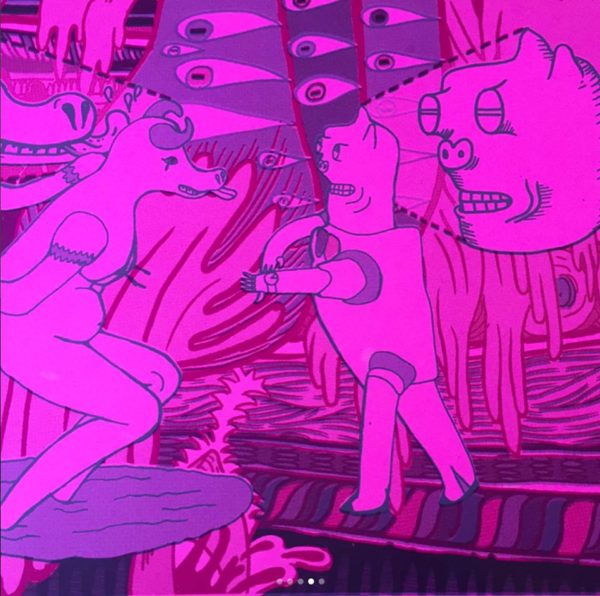 Once they finished with the collaborative drawings, they were scanned and recombined, so that the end results were typically composed of parts of many other drawings. Sometimes parts of one drawing would be layered onto another, not unlike the way Robert Rauschenberg would layer images in his silk-screened works. 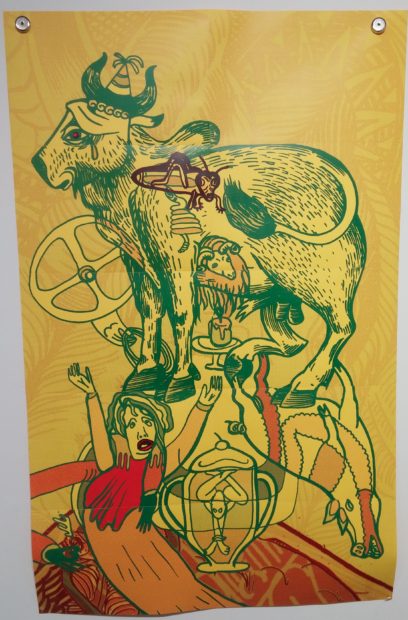 In the case of Barnyard Enthusiasm, the layering is done in the computer from the scanned images. On top of that, they printed it on colored paper, which gives it an additional intensity.

Barbarians at the Gate

Other works combine images in a more traditional way: by collaging them. The collaged bits are produced via LaserJet and Risograph prints on various colored pieces of paper. Barbarians at the Gate shows a host of figures covering a horizon, as if the viewer is at the gate looking out on the invading barbarian horde. The figures are individually printed and then collaged onto a larger piece of paper. Above them is strange image—in turbulent red clouds, two animals, one of them skeletal, appear in yellow. They’re the focal point of the composition, and they seem like a prophetic vision. The piece conveys a dread similar to the quasi-medieval paintings of Pieter Bruegel, like The Triumph of Death or The Fall of the Rebel Angels. 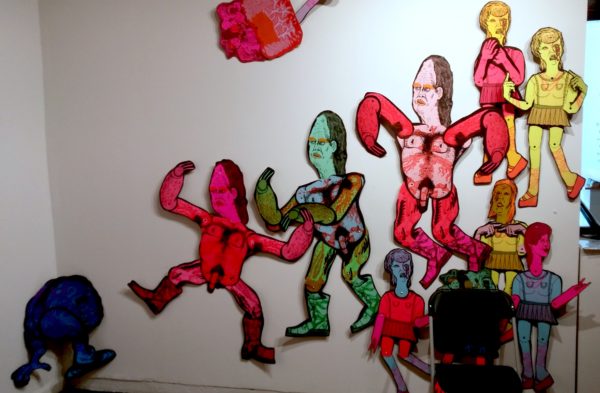 Some of the images are paper puppets, articulated with brass brads. Beef Chain Showdown consists of a crowd of large paper puppets tumbling across a fabric backdrop. What is happening in the image is not exactly clear—it could be the scene of a riot or a large brawl or even the end of a crowded footrace. Each figure is composed of many different drawings; the naked man in cowboy boots has a torso comprised of two drawings—one shows his torso anatomically (his nipples and his penis); the other is like a tattoo laid on top of his torso.

Beef Chain Showdown is the largest piece in the exhibit, but the most elaborate is City Council Meeting, created with LaserJet prints and a video projection. In the foreground are two masked out black-and-white anthropomorphic creatures, a cow and a pig, by Csillagi. Behind them is a grid of multicolored images created by the video projection, and the rectangles in the grid continually shift colors. 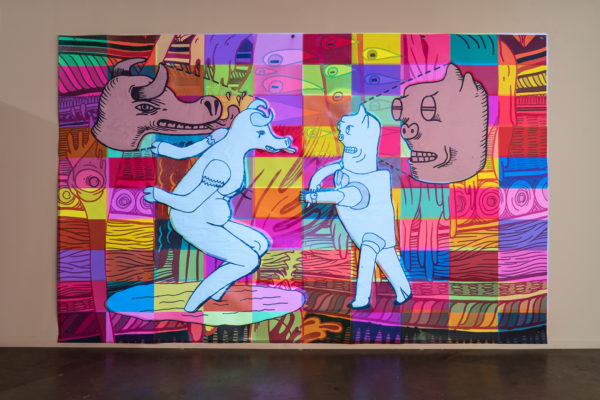 With their bright colors, paper puppets, and blinking multi-colored video, Trigger Town creates a circus-like environment. The work has a visual relationship with posters, and the show takes something casual—a large number of modest collaborative drawings—and turns them into something much bigger. Trigger Town is a series of huge eyeball kicks.