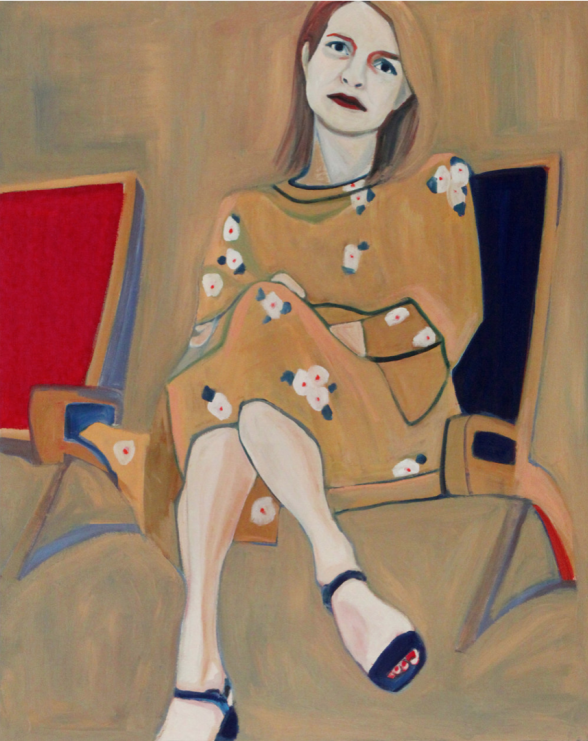 My dogs’ insistence that I take them to the dog park usually manages to make me feel slightly better about civil society and the next four years. Other people who care enough about their dogs’ mental and physical health to load the shedding, farting beasts into their cars and drive to the park tend not to be outright barbarians. I’m fine sharing democracy with most of the people I meet there.

There’s usually room for a polite conversation that reveals just enough social information about each of us that we feel sure that one of us won’t club the other over the head when we turn our backs. This is the kind of casual, inquisitive, slightly skeptical social observation you’ll find on view in Seen, Sarah Fisher’s exhibition of portrait paintings at Art Palace in Houston. 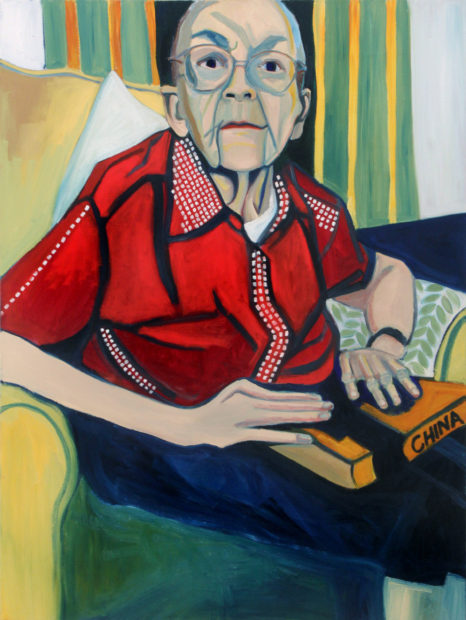 Unlike many fresh-faced aesthetic revolutionaries learning how to change the social order or hustle up a nest egg with a gimmick, Fisher has already had a career in marketing. Her portraits of friends and family members reveal the kind of sensitivity to human beings that tends to come out of more than 30 years of life experience. In Moxie, Fisher depicts a determined old woman who could be anywhere from 80 to 100 years old. It’s a sensitive, straightforward picture that skirts sentimentality and pathos to settle on a simple realism. 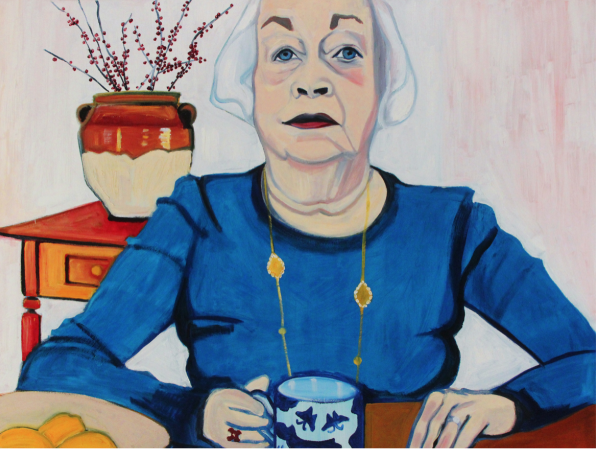 Now and Impermanence depict the kind of sophisticated, confident art world women that I’ve been lucky enough to meet, work with and marry. The woman in Impermanence wearing stylish glasses and confidently filling out a dark blue chair that is only slightly differentiated from her dark blue slacks and shirt exudes wry confidence, while the slightly younger woman in Now, whose greenish-yellow dress creeps up abstractly into her neck, seems distant as she bobs her elegantly-shod, carefully painted toenails in the foreground.

Not every painting in Fisher’s exhibition is successful. The sharply observed mother-in-law type in Character held my attention, but the muddled pattern on the shirt of the man in Magnanimity prevented me from fully enjoying the humorous inappropriateness of a man of a certain age (and build) leaving the fourth button on his shirt undone. Fisher’s character observations are wry and humane but the titles—character traits with which she describes her subjects—can prevent me from coming to my own conclusions about these dinner-party guests.

Every now and then I’ll see Bill Willis out at a gallery opening. I always make a point of asking him the open-ended question: “How’s it going?” His answer has always been, as far as I can remember: “Just okay.” 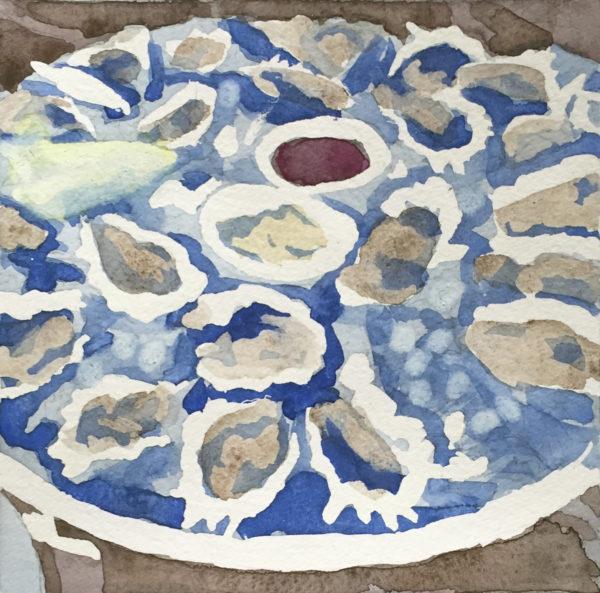 Nope, just okay. But this just-okay sentiment is always delivered with what seems to be a combination of resignation and gratitude. Acknowledging that things are “just okay” implies its opposite—things could be so much worse. Willis’ small watercolors of bucolic landscapes, tacos, sandwiches, oysters and other pub fare reflect that sentiment perfectly. Willis’ watercolors are clean, carefully executed and somehow manage to exude the same resignation and gratitude I hear in his voice. They are, in the best sense of the phrase, just okay. Are oysters, wine and tacos really all there is? That could sound depressing until you envision all the terrible places in the world were you can’t get sandwiches or take a walk in a park. 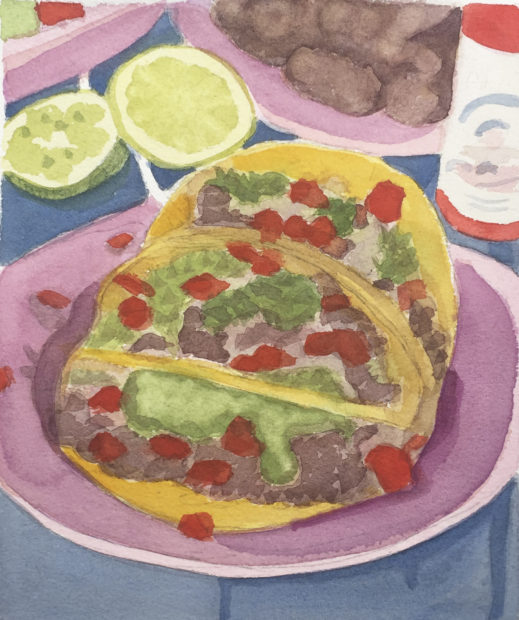 In this and his last exhibition at Art Palace (also foodstuffs) Willis sees no reason to show off. There are no excessive painterly flourishes, and the closest Willis comes to angst is rendering a taco and a sandwich in monochrome. It’s not often that I think of a painting style as moderate, but that’s just the word that comes to mind when I see Willis’ work. If we go ahead and scrap the idea of the progressive avant-garde in art, it opens up a lot of room for competence and careful moderation and the implicit, almost completely positive social implications that follow from those designations. 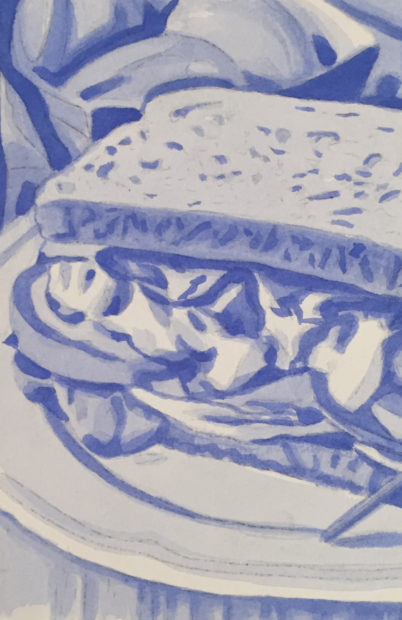 In this polarized political atmosphere, where art is either commodity or revolution, and capitalism is evil and everyone is either an oppressor or oppressed, Willis’ small watercolors are a nice reminder that capitalism has at least given us oyster plates and BLTs. When the worst of the Trump right finally join the worst of the Bernie Sanders left to form one big, stupid, accusatory, paranoid blob, I hope I’ll be in a bunker having a sardonic conversation over a glass of wine and a fancy sandwich with Bill Willis and Sarah Fisher.

Through Feb. 28 at Art Palace, Houston.