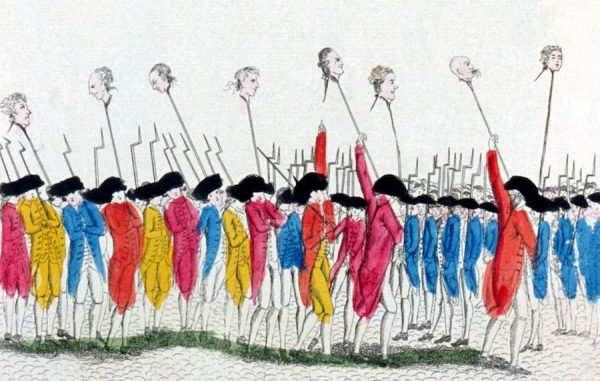 Rich people sure have been taking a lot of flak in the art world lately, haven’t they? There’s hardly an institutional exhibition, call for submissions or trendy non-profit show that doesn’t explicitly or implicitly engage in some kind of class warfare. This kind of thing is bound up in identity, but at the end of the day modern revolutions are about inequality and wealth, and people of all kinds fall along the distribution of inequality.

For the last five years I’ve been lucky to be able to teach art to students all along the wealth-distribution scale. I’ve taught studio courses to professional people from the upper levels of capital income, to blue-collar and service workers in community college, to functionally illiterate high-school students in charter schools. I’ve come in contact with fellow teachers and artists, all of whom more or less belong to the same economic class as I do. And I’ve found people to like and dislike all along the way. There is no inherent virtue in being rich or in being poor. It depends on the individual. A jerk gives me a headache whether they’re a spot-welder or a retired energy-sector executive.

So why are so many art types so mad at rich people? I think a large part of it surely has to do with cognitive incoherence brought on by overexposure to all the Robespierres in the social media “art world.” On Monday some high-profile art type will post a photo of themselves on the lawn of the Menil Collection with all manner of hashtags relating to love and sunny days, while on Tuesday the same person calls for the dismantling of capitalism. ‘Menil’ isn’t a made-up word. It’s the family name of a group of rich people who decided to open their staggering art collection to the public free of charge.

Even the most radical among these types will post a Facebook status about a good show at the Museum of Fine Arts, Houston, followed days later by an explicit denunciation of rich people. All the names on that big engraved wall to the left of the headless Roman sculptures with tiny penises as you enter the Audrey Jones Beck building at the MFAH are those of rich people. Still others will post images of overheated Jenny Holzer texts about hungry babies and purifying fire while also sharing well-lit images of their tasteful paintings installed behind Eames chairs.

Look at the back of every non-profit and museum pamphlet you pick up, and you’ll see acknowledgements to a small handful of very rich people. Rich people sit on the boards of museums and non-profits, and they’re responsible for drumming up funds for these institutions’ operating cost. Enormous endowments? Endowed by rich people. Art has never been disengaged from wealth. Poor people don’t buy art, and they don’t sit on boards of trustees.

The class warfare rhetoric among activist art types is hard to take seriously because it’s so often hypocritical. Do a thought experiment: imagine the art world without rich people. It went dark, didn’t it? Because without philanthropy and voluntary private market demand, both of which depend on inequality and large accumulations wealth, there is no art. There’s only propaganda.

But for the so-called radical art types, the plain fact of philanthropic and market redistribution of wealth — from capital gains to museum endowments, public collections and private galleries — isn’t enough. Ever the conspiracists, who likely distrust their own hearts most of all, these art types want to understand the motivations behind this redistribution.

Ironically, the answer they come up with most often — guilt — is actually something like the truth. It turns out having millions of dollars can make a person pretty self-conscious about how they spend their time and resources. Once you’ve bought the third house on the third continent and stocked the cellar with the most expensive wine on offer, the diminishing material and psychological utility of vast wealth generally tends to make a lot of rich people think about legacy, and the world they’ll leave behind. Experienced as I am with government agencies of one kind or another, I think I’ll take the philanthropy.

A few weeks ago I was talking to a Houston gallerist and I felt a little relieved when he told me that he views most of this rhetoric as stemming from frustrated artists who haven’t been able to get their work into the places they’d like to. If that’s true then it’s the same old story — resentment and frustration with a more fervent cast. But I’m not so sure. Too many artists seem to have fallen in love with their own rage and indignation. In On Revolution, Hannah Arendt writes that “…rage is not only impotent by definition, it is the mode in which impotence becomes active in its final stage of despair.” If this is true, an awful lot of the art world looks pretty flaccid right now.

For the uninitiated, Ayahuasca just might fix this author’s holier-than-thou attitude…
I understand cheap trips abound, just remember: set and setting are key. Now, off with his head, or, at the very least, his ego !!!

I met Michael Bise in person recently for the first time. I didn’t find him to have a “holier-than-thou” attitude at all, quite the opposite. He struck me as “down-to-earth”, smart, friendly. To me, your comment seems a bit ad-hominem and I wish it were about the content of the article instead. I think that the strength of this kind of op-ed article is really that it gets people talking and thinking about art and the art world. In my opinion, that’s invaluable. I don’t think that a good art publication would publish things that everyone agreed with all of the time. How boring would it have to be to never raise an eyebrow at all? Don’t we grow in our understanding of the world from having our views challenged? Maybe some of us don’t but I do. I like seeing the pot stirred up a little bit and I love reading the conversations that come from it. Let’s share information and grow together in our knowledge and views. I mean, how many times have I been in a gallery where no one is looking at the art and no one is talking about it either?

“Do a thought experiment: imagine the art world without rich people. It went dark, didn’t it? Because without philanthropy and voluntary private market demand, both of which depend on inequality and large accumulations wealth, there is no art.”

Exceptional art is made all the time in outsider circles that are not sustained by the super wealthy or by philanthropy. Mentioning some hypocritical social media posts, plus a couple sweepingly general, gossipy conversations with gallerists, and adding a favorite few snarky aphorisms doesn’t really inspire one to feeeel for the plight of the *unfairly criticized* wealthy elite of the art world.

“Look at the back of every non-profit and museum pamphlet you pick up, and you’ll see acknowledgements to a small handful of very rich people. Rich people sit on the boards of museums and non-profits…” it is an American problem, where almost all museums are owned and managed by rich people. Not the case for Louvre, d’Orsay, Pompidou. No education, no health system, no culture from the state. You have to lick rich people asses again and again so they will buy your art and later they can show it to your kids.

Without wealth there is no art? Fuck off. I make art every god damn day, and my motivation to do so has nothing to do with rich collectors.

poor people buy art when it is marketed to them for a price they can actually afford, all the time

It is deeply disturbing that an artist of Bise’s stature in the region has decided to unilaterally declare all art created outside of a commercial paradigm to be “propaganda.” It also belies a deep disconnect from the vibrant vein of noncommercial and socially engaged practice taking place right here in Houston, that is vital and critical yet consciously made outside from the free market.

And the assumption that poor people neither buy art nor would have interest in sitting on boards of trustees if they weren’t set apart by the restrictive nature of a free-market based system of supporting art is the laziest, most classist thing I’ve seen come out on this website in a long time. Please, please do better. This is so totally disappointing.

Your ARTicle is totally wrong and has upset me and many of your readers and if you don’t don’t agree you must be Nazi even if you voted for Bernie Sanders! We must have the peoples revolution against the rich who must be very terrible peoples all of them! How else could they be rich unless they are terrible peoples who stole their money from people who never had money! We must take their money and possessions and redistribute it to the poor! Then, when all the poor people have the money and are the new rich ones we must take the money from them and burn it!!

As you would quickly learn, under communism, art would have great success as all things always succeed incredibly good under communism! Communism has always been great success as the world witnessed in USSR, China, Cuba, Vietnam, Cambodia, Laos, Angola, Ethiopia, Congo, Somalia, North Korea and now Venezuela! Look at the tremendous freedom and prosperity they are experiencing there in Venezuela and everywhere where they try it! Come on! Together, let us turn America into the New Somalia!!

I can’t help but wonder if you’re living in the same world as the rest of us, you know, the one in which the social safety net has been dismantled so the most wealthy don’t have to pay their taxes and government support of any kind is increasingly rare. Fine if you don’t like bureaucracy, but having an alternative is important for some of us that don’t make salable work. And why is it so surprising that artists question the economic structure of art? Seems like there’s kind of a long tradition of that….

Real-world economics are tilting the flow of money toward the wealthy at an alarming rate. While the author has interesting points to make, in a narrow field, the article sounds shockingly oblivious to the big picture.

Really look forward to a best and worst, that always bunches some folk’s panties. Keep making art artists,,,hang these articles in your studios, fuel your fire if you need it. Please create and speak for those who’s voice may not have the volume distance

Bise out here dunkin’ on clowns.