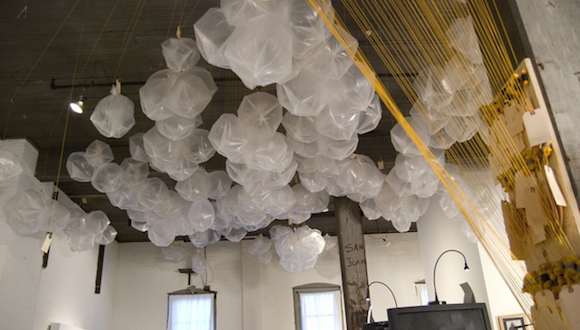 Today, from sunrise (6:46 AM) to sunset (7:53 PM), Houston-based artists Nick Vaughan & Jake Margolin will be performing in conjunction with their current exhibition at Devin Borden Gallery. The duo, who recently had a show at Art League Houston, make performances in which they read texts into plastic bags to create “captured breaths.” For today’s performance, titled Spiritus: The Word, the artists will sit separately in cars and repeat the broadcasts of NPR and FM 100.7 “The Word” (a Christian radio station), allowing bags of breath to fill their vehicles over the duration of the piece. At twilight, the gallery will host a reception for the artists.

Past performances in this series have included Nick and Jake reading every word that John Wayne spoke in his films, 20 hours of Fox News, and most recently, reading the novel Norma Trist and the court cast Lawrence v. Texas. The duo also participated in Ten Tiny Dances, a 2016 CounterCurrent performance.