by Paula Newton May 29, 2015
FacebookTwitterEmail

This past Memorial Day weekend, while Texans were busy posting stunningly awful images of the relentless rain and flooding, an image of an innocuous statue on the San Antonio campus of the University of the Incarnate Word (UIW) made its rounds on the rest of social media. 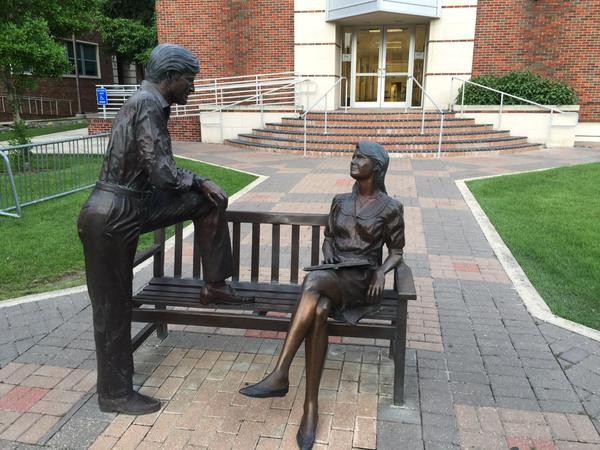 As explained by the New York Times article entitled “The story behind the ‘Mansplaining: The Statue’ photo that went viral on Twitter,” a woman was visiting the campus, snapped the photo, and texted it to a few friends “to share the artist’s unintentional joke.” One of those friends was Cathy de la Cruz, a self-described “avid tweeter,” who tweeted the image with the caption, “A friend spotted this in Texas: #Mansplaining The Statue.” It quickly went viral and, on Tuesday, Jerry Saltz, the senior art critic for New York magazine, tweeted a version of de la Cruz’s original joke. Even Rebecca Solnit, often credited with coining the term “mansplaining,” reposted Saltz’s tweet. (Solnit did not coin the term, but it was inspired by her 2008 blog essay, “Men Explain Things to Me,” as well as her later book of essays of the same title.)

A UIW official stated, “The statue has long-symbolized the friendship and camaraderie that develops among students as they attend UIW. We are deeply saddened that this image of friendship has been misconstrued as a symbol of sexism on social media. Nothing could be further from the truth.” Paul Tadlock, the San Antonio sculptor who created the work, seemed a bit more amused. After having the term “mansplaining” explained to him, he denied that the sculpture was intended to describe the phenomena, consciously or unconsciously. But he added, “That’s generally the case. The ladies know more. Because guys, young guys particularly, love to tell everything they know to impress the girls, and the truth is most of the girls know it already.”

The viral photo has made its way into a number of articles and blogs, including the Huffington Post and Bustle, which seemed to find the whole thing pretty funny, but the Washington Examiner ended its article with this paragraph:

Note to future sculptors: When trying to show men and women talking as friends, don’t. There’s just no way you can do so without offending modern feminist sensibilities.