Art critic Jerry Saltz has certainly been in the public eye lately—he was a regular judge on the reality-TV game show Work of Art; he gave an ecstatic review of George W. Bush’s new painting skills; served as a dancing partner for Jay-Z in his “performance art project” (a music video shoot for “Picasso Baby”); and, just a few weeks ago, he was so moved by Kanye West’s new video “Bound 2” that he coined a new art movement (or a “collective cultural fracturing”) called the New Uncanny.  All these pop culture references explain why, on Wednesday morning, CNN New Day host Chris Cuomo turned to the recognizable and apparently up-for-anything Saltz for his opinion on the latest huh?-turned-artist, George Zimmerman. 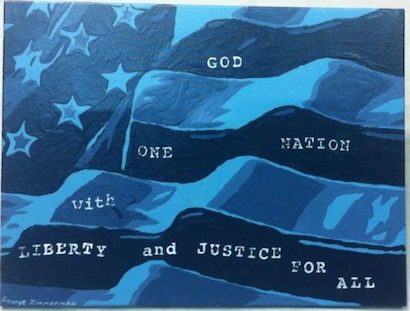 Zimmerman, the ex-neighborhood watchman known for the 2012 fatal shooting of Trayvon Martin, has turned to the arts and put up a painting for sale on eBay the other day. On the product description section, Zimmerman writes, “Everyone has been asking what I have been doing with myself. I found a creative, way to express myself, my emotions and the symbols that represent my experiences. My art work allows me to reflect, providing a therapeutic outlet and allows me to remain indoors :-)” 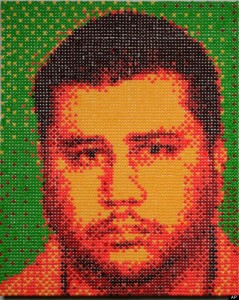 In the formal critique of the work, the New York magazine columnist called Zimmerman’s painting “a travesty, a placard, a poster, something you might see in protest,” but Saltz also added a bit of psychological interpretation: “It’s needing to be the center of attention. I think it’s a bit psychotic.” Upon hearing that the eBay bidding, which started at $0.99, has already topped $100,000 (bidding closes December 21), Saltz invoked the names of Picasso, Warhol and Lichtenstein before stating that, “In my opinion, he should not even be allowed to make the money sold for this painting.”

Saltz, who is quite active on Facebook and Twitter, has, of course, been getting attacked from both sides: scary, violent hatred from Zimmerman supporters for calling their hero “psychotic” and disgusted shock from his own fans for giving Zimmerman’s painting any attention at all. Saltz closed his column today with this comment: “If I was caught in this crossfire, I’m glad I was there. And would do it again in an instant. Silence = Death.”

Art is not therapy. Everyone suddenly wants to be an artist, and the real artists want out.